German City Will Re-Open the Case of Katharina Henot, Burned at the Stake for Witchcraft in 1627 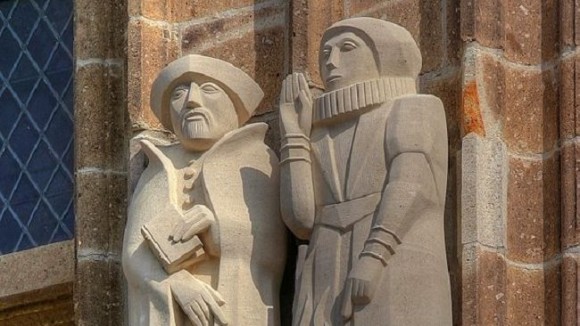 One of Germany’s most notorious witch trials will be re-examined with the goal of clearing the name of a woman many believe was wrongly accused and executed for being a witch. Katharina Henot ran the post office for the city of Cologne with her brother, and apparently, the Imperial Court wanted in on some of their profits and started planning a central post office. So, when a local nun started pointing paranoid fingers at Henoit and her case went to the Imperial court, she didn’t exactly have many allies. While thousands were subject to the witch trials, the results of Henot’s was considered especially egregious, so much so that Henot was immortalized as a statue on the Cologne Town Hall building after her execution. Now, the city council that convicted her is taking another look at the case and trying to clear her name.

Henot, who was an important lady in 17th century Cologne, is considered by some to be Germany’s first female postmaster. She and her brother Harger inherited the post office from their father, which put them both in a high social position in Cologne. However, there was a continued conflict with the Imperial Court, particularly with one Count Leonhard II von Taxis, who was trying to establish a single, central post office.

This political conflict would spell the downfall of Henot during the Würzburg Witch Trials that took place from 1626 to 1631. At some point, a nun from a convent started becoming obsessed with Katharina. Rumors started spreading, and eventually, both siblings were accused of sorcery and causing the death and sickness of Cologne citizens. After being arrested on the order of the archbishop, Katharina was imprisoned and tortured for months, denied bail and representation in court. And despite her repeated denials, the Imperial Court sentenced her to be burned at the stake for her “crimes.”

After her death, there was tons of evidence that she was wrongly accused, let alone convicted. Her brother tried to clear her name after she was executed, but then he was accused — again — of being a witch himself. He went to prison, but the trials ended before he was sentenced.

Now, an evangelical priest, Hartmut Hegeler, is seeking justice for Katharina Henot, saying that no respectable member of the clergy would allow such a verdict to stand, even after all this time.

‘Katharina held her own reputation in high esteem, she would want to have it cleared.

‘As Christians, we find it challenging when innocent people are executed, even If it was centuries ago.’

Hegeler has officially petitioned the Cologne council — the same Cologne council that convicted Henot — to take another look at the case and clear her name. Evidence will be examined by local politicians, members of the clergy, and laypersons. Living relatives of Henot, while supportive, still feel that there are people who are alive today who would benefit from such an effort. But they’re not going to stop Hegeler from clearing the name of one of Cologne’s most influential women.