Kate Beaton, as you hopefully already know, is the writer and illustrator of the phenomenal Hark! A Vagrant. Do you like classic literature, historical fanfic, sass-mouthed women, and cool comics? That’s Hark! A Vagrant. 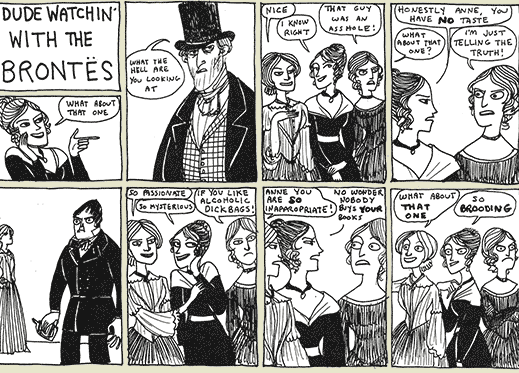 Unfortunately, Beaton’s current project isn’t that fun. She’s launched a YouCaring crowdfunding campaign to raise money for her sister, Becky Beaton, who is currently fighting cervical cancer. As we here on this site are passionate about both Beaton’s art and women’s health, this hits doubly hard.

As the campaign page describes, Becky Beaton was diagnosed with cervical cancer in late 2015. A year later, she was told radiation had been successful and the tumor was gone. But just a few weeks ago, she was told it had spread further, and that the aggressive cancer was thought to be “incurable.”She isn’t giving up, though, and has applied for a number of experimental trials, all of which require a staggering amount of money up front.

For many of us, that’s a story that I’m sure hits too close to home, either because of our own experiences or our fears of future experiences. It never stops being tragic and completely infuriating that we live in a world where the cost of treatment is potentially a bigger obstacle than recovery itself.

Kate Beaton has been posting illustrations to her Twitter over the last day or so, drawn in hospital waiting rooms, to let us all get to know her sister a little better.

she arrived famously early, but you'll get a whack if you joke that it was the first and last time she did https://t.co/gLmLafetKB pic.twitter.com/0BeXzCeJDX

You can check out the YouCaring page, either to donate if you’re able, or to consider sharing the campaign. You can also see more of Kate Beaton’s family illustrations on her Twitter page, and more of her work on her website.