Kanye West Claims His MAGA Hat Makes Him Feel Like Superman, Which is Ironic Since Trump is Basically Lex Luthor 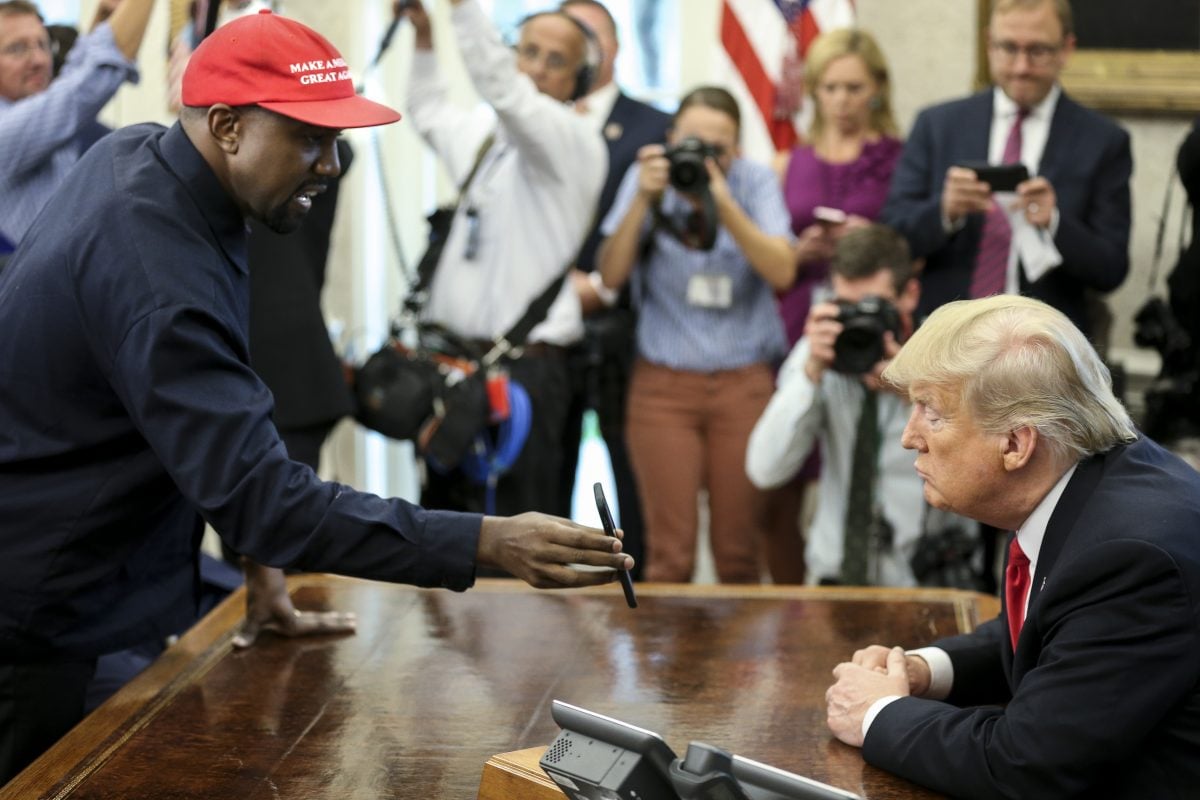 I know we joke a lot about the impending apocalypse, but it’s awfully hard to ignore the omnipresent signs of impending doom. I’m talking specifically about Kid Rock and Kanye West at the White House hanging out with Donald Trump.

Kid Rock’s presence is hardly a surprise, but Kanye’s continued stanning of the president is at turns upsetting and wildly disappointing. How is it possible that the same man who said “George Bush doesn’t care about black people” on national television is the same dude rocking a MAGA hat and lauding Trump?

In today’s nonsensical press conference with Trump, Kanye discussed his love of Trump and the MAGA hat, saying that Hillary’s #ImWithHer slogan didn’t grab him as a man. “This hat, it gives me power in a way. My dad and my mom separated, so I didn’t have a lot of male energy in my home … I love Hillary, I love everyone right, but the campaign ‘I’m with her’ just didn’t make me feel as a guy … that could play catch with his son.”

Kanye, in the Oval Office, unwittingly detailing how misogyny played a role in the 2016 election:

“I love Hillary, but the campaign ‘I’m with her’ just didn’t make me feel — as a guy … it was something about this hat that made me feel like Superman,” pic.twitter.com/T1dGX1G79V

Really, Kanye? First of all, her slogan wasn’t #ImWithHer, it was “Stronger Together.” And the fact that a woman was running for president made you so insecure in your masculinity that just the very concept of women supporting other women meant you felt like you couldn’t play ball with your son? Is your narcissism so great that it couldn’t be shored up by 44 male presidents in a row and an overwhelming majority of men in all branches of government?

Kanye continued, saying “when I put this hat on, it made me feel like Superman … that’s my favorite superhero, and you made a Superman cape for me, also as a guy that looks up to you, looks up to American industry Gods…”

If Superman really was Kanye’s favorite hero, he would know that Superman was the creation of two Jewish comic book artists during the early days of World War II in a response to the rise of fascism. He would know that Kal-El is an immigrant from outer space who came to make America stronger, better, and more just.

What’s bitterly ironic about West’s praise for Trump is that the president has far more in common with Superman’s arch-enemy Lex Luthor. Actually, that’s insulting to Lex, who was a genius and a billionaire. Lex Luthor wouldn’t squander his father’s fortune on failed steak companies and vanity projects.

People quickly took to Twitter to defend the Man of Steel, who would obviously be against things like tax cuts for the rich, detaining immigrant children, and all the toxic racism and sexism that spews out from the White House.

Periodic reminder that Superman is an undocumented immigrant and refugee and his arch-enemy is a xenophobic billionaire who places his own ego and power lust above all other considerations and is eventually elected President. https://t.co/YJ9Ochtd5Y

As I keep saying, shamelessness is a superpower and Ye has even greater reserves of it than Trump.

Superman and America deserve better than these two preening jagholes.