Why Other Superhero Comics Should Be Like Kamala Khan’s Ms. Marvel 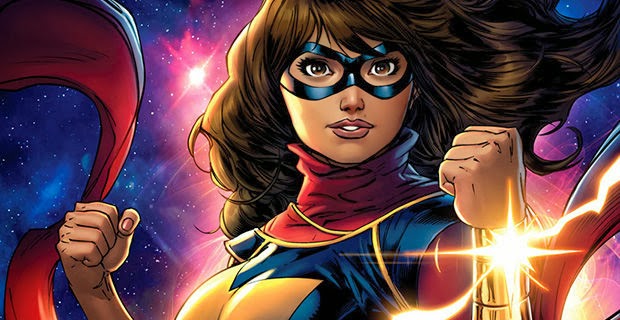 When people talk about diversity in comics, what usually comes to mind is diverse characters or creators. Yet, diversity shouldn’t have “either-or” scenarios. Instead, it should be as broad as possible. One of the most recent comic series that demonstrates this is the Kamala Khan Ms. Marvel comic, which recently won the Dwayne McDuffie Award for Diversity.

While Marvel Comics’ diversity as a whole isn’t up to par with women creators and creators of color, the success of Ms. Marvel sets an example that hasn’t been seen in years with a diverse creative team, a diverse lead character, and diverse stories.

The people that make up the creative team of Kamala Khan include Marvel editors Sana Amanat and Stephen Wacker, as well as writer G. Willow Wilson and artist Adrian Alphona. This is two women and two men, with one woman also being a person of color. In fact, the heart of the Kamala Khan comics comes from Sana Amanat’s own experiences growing up as a Pakistani American girl. Amanat discussed these influences on Ms. Marvel at length during a TED Talk in 2014.

“Kamala Khan came out of this global subconscious desire for representation, for those Muslim-American bacon-sniffing girls like me and for anyone else who feels like misfits themselves,” she stated. “Kamala Khan’s story is about confronting the labels you’ve been assigned and sculpting them and redefining them until you figure out who you are.”

Although Sana Amanat’s influence on Kamala Khan is extraordinary, she’s not the first person of color to create a diverse character and story. The late Dwanye McDuffie co-founded the minority-owned comic book company Milestone and created black characters like Hardware, Icon, and Static. There is also the late Robert Morales and his character Isaiah Bradley, a black soldier who was a product of the Super Soldier program that made Captain America. Amanat’s success continues the path set by them.

As a lead character, Kamala Khan brings diversity, but not in a stereotypical or token way. While there are similar characters such as Silk’s Cindy Moon or Ultimate Spider Man’s Miles Morales, these characters aren’t affected by the labels that go with their ethnicities. While they are a step forward with making comics more diverse in terms of how they look, they don’t reflect how Asians and Afro-Latinos are seen by others and how that affects how they interact with the world.

Khan’s Pakastani American identity directly impacts how she’s seen by others and how she interacts with others. This is particularly seen in Volume 1: No Normal. In this volume, Kamala’s Pakstani identity is in conflict with her American identity when she expresses her desire to be like every other American teenager.

In the first issue of the volume, Kamala and her friend Nakia hear microagressions from their classmate Zoe. Zoe asks Nakia if anyone was forcing her to wear her headscarf and if anyone was going to honor-kill her for not doing so. Later on, Kamala sneaks out to go to a party that her schoolmates are attending, only to be told by Zoe that she can’t stand near her because she smells like curry.

As a result of feeling out of place, Kamala tries to assimilate into the American ideal of a superhero when she shapeshifts into Carol Danvers and takes the name of Captain Marvel. When Kamala realizes that she doesn’t have to fit this ideal, she takes the name of Ms. Marvel for herself and creates a costume that represents her Pakistani-American identity. 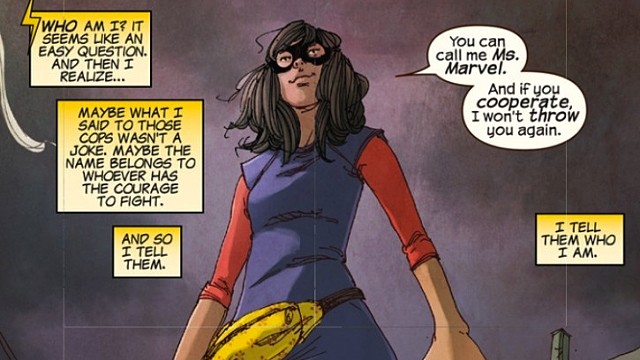 Another way Kamala Khan is diverse is that she has traits that aren’t seen too often among women of color. She’s awkward and nerdy, fangirling over superheroes as she fights alongside them. When the only adorkable women of color in media include Mindy Kaling and Issa Rae, a fictional character like Kamala is very welcome.

With a diverse team and diverse lead characters, you can tell diverse stories. From 2014 to the most recent issue, you have a story about a Pakastani-American teenager learning to deal with her superpowers and issues like assimilation, female agency, and gentrification. These stories are entertaining and thought-provoking, making you see yourself and the world differently. This diversity reflects reality and is something other superhero comics should aspire to.