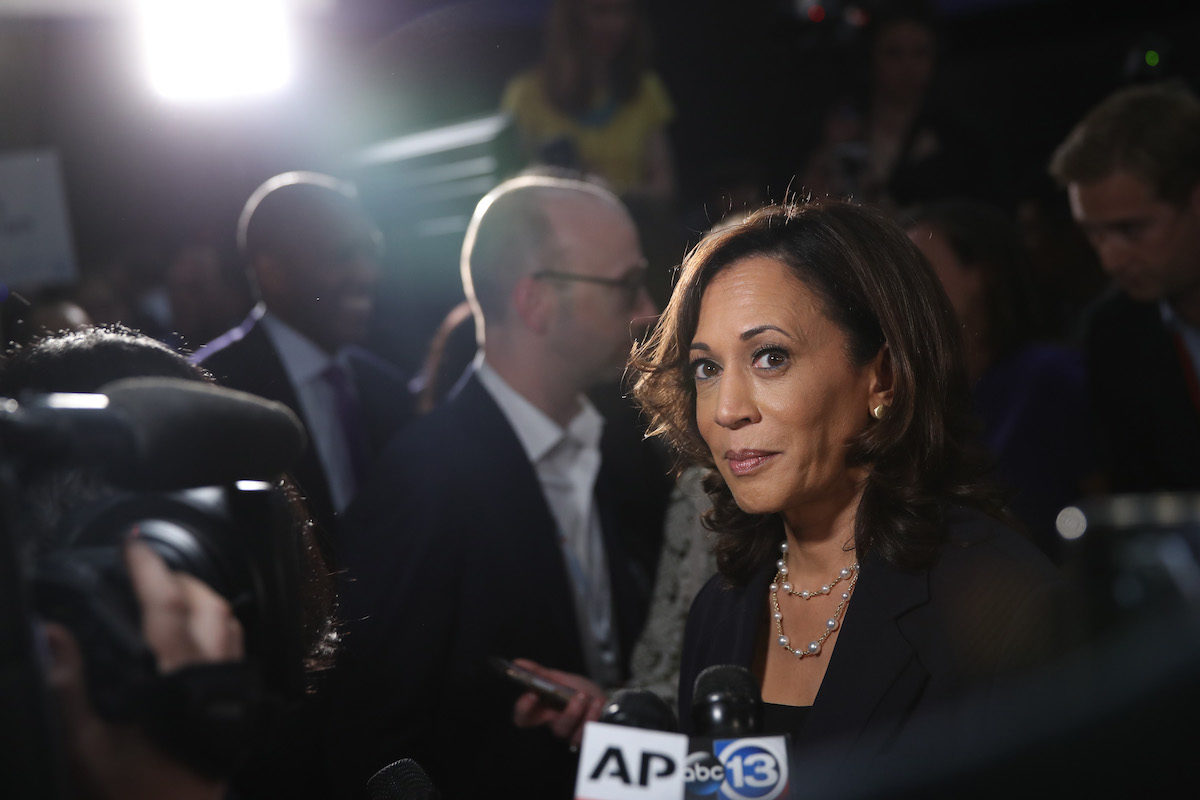 Last night was the second round of the first Democratic debate and we were subjected to ten more candidates’ thoughts on a whole range of issues. A lot of people had been referring to the second nights’ candidates as the “A team,” since it included the majority of the B boys–Biden, Bernie and Buttigieg. But it was Kamala Harris who hands-down owned the night.

Round two of the debate posed fewer questions to the candidates but even with the extra time to dive deeper, the whole night felt less substantive than the previous round. There was less detailed policy discussion (probably because Warren wasn’t there) and a lot of the candidates tried to coast on their prepared talking points rather than answering questions directly. Harris definitely came in with some canned comments, but at least they 1) were wholly unique and personal, and 2) fit in to work with the questions asked rather than ignore them entirely.

On a crowded stage dominated by shouty men, Harris managed to silence the room twice. First, by giving us the best line of the night. As a number of the other candidates were trying to talk over each other, Harris called them out by saying “America doesn’t want to witness a food fight; they want to know how we’re going to put food on their table.” Yes, she definitely had that line prepared ahead of time, but when it came time to use it, she didn’t miss.

It was, inevitably, the moment people were going to be talking about today. That is, until she gave us an even more powerful one.

When an argument about racial justice broke out onstage, the moderators were stuggling to cut everyone off and move on to the next issue. But Kamala Harris hadn’t gotten to speak yet. She seemed to lock eyes with Rachel Maddow and reminded everyone that “as the only black person on this stage, I would like to speak on the issue of race.”

She called out Biden’s most recent controversy and his apparent wistfulness for the days when he and segregationists could work together with “civility.”

“I do not believe you are a racist,” Harris said directly to Biden. “But it was hurtful to hear you talk about the reputations of two United States senators who built their reputations and career on the segregation of race in this country.”

“It was not only that, but you also worked with them to oppose busing, and there was a little girl in California who was part of the second class to integrate her public schools and she was bused to school every day, and that little girl was me,” she said.

There was a little girl in California who was bussed to school. That little girl was me. #DemDebate pic.twitter.com/XKm2xP1MDH

Not only was it really powerful to see a Black woman say these words to a white man, who is only on that stage because of the opportunities Biden indirectly would have prevented–but once again, Harris schooled her peers, showing them how to infuse personal anecdotes into political conversations without seeming cliche.

That’s something nearly every candidate tried to do with the issue of healthcare, and they all failed.

I’m glad every single person on this stage is explaining why healthcare is personal: I, too, have a human body and am related to people with human bodies.

It was a big moment, and one that Biden was not prepared to handle, though he should have known it was coming. He denied that he opposed busing, which simply isn’t backed up by actual history.

Imagine if he’d just said “it was easy to be pragmatic instead of brave in the 70s. It’s something I’ve had to live with for over 40 years” instead of being Biden. https://t.co/4nOx60woOc

At one point, he backed down by saying “My time is up,” which was laughable since not a single person on that stage ever voluntarily stopped talking when their time was up. No one cared about the time limits. Except this one specific moment.

Kamala is going to have to prosecute herself for murdering Biden

It wasn’t the only point in the debate when one of these candidates seemed unfamiliar with their own history,

Rachel Maddow: A “newspaper recently released portions of an interview you gave … ‘My own view on guns is, everything being equal, states should make those decisions.'”

Bernie Sanders: “That’s a mischaracterization of my thinking.”

Maddow: “It’s a quote of you.” #DemDebate2 pic.twitter.com/DdBxbeZFAj

That wasn’t even Bernie’s worst moment. He was asked to explain what he would do if Roe v Wade were overturned, and when he skirted around the question, Maddow insisted that he give a direct answer. His response was that he would support a Medicare for all plan, which is in no way an answer to the question asked. It was a glaring example of so many people’s major criticism of him: That he has a willful blindspot for social issues that wouldn’t be fixed by an economic overhaul.

The answer to “what would you do if Roe were overturned” is not “Medicare for all.” That’s how you (ideally) pay for an abortion, not how you protect the right to abortion.

It should be noted that Buttigieg came out of last night looking really good. He had some great moments and definitely made an impression, and this was a tough crowd to stand out from. Between Harris’ incredible performance, Biden’s bungling, Williamson’s WTFery, and just so much shouting, he was still able to claim some ground.

The next round of debates are July 30th and 31st. To qualify, a candidate will reportedly need to hit the same metrics used to qualify for the first debates: they will need to be polling at least 1% in three different polls OR/and raise money from 65,000 individual donors, with 200 donors in 20 different states each. For the third round in September, it sounds like the rules haven’t officially been set, but that the DNC will likely double those numbers.