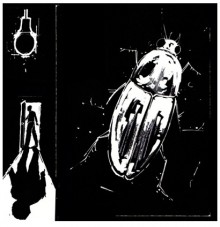 Today, a specialist will open up four vaults in Zurich, believed to contain the unexamined last words of the late writer Franz Kafka, the BBC reports. The enigmatic Prague-born author, who penned the widely-read short story The Metamorphosis, had a good chunk of his texts–many of them unfinished–published posthumously.

At some point in the past 50 years, Kafka’s last documents were stored in bank vaults in Tel Aviv and Zurich. Now the writings, which have been the subject of a long legal battle regarding owner rights, will finally be examined.

Kafka had reportedly asked his friend and literary executor Max Brod to burn his manuscripts after his passing. However, following Kafka’s death in 1924 from tuberculosis at age 40, Brod published the novels–including now-canonical works such as The Trial and The Castle–and traveled to Israel where he left the papers to his secretary Esther Hoffe, who then bequeathed them to her two daughters.

Though the two Israeli sisters inherited the texts, the Israeli state is also claiming them, citing Kafka’s Jewish heritage. Additionally, Germany’s literary archive has offered to purchase the manuscripts.

Other archives around the world have said that Kafka’s works at least should be made available to the public. A Tel Aviv judge in charge of the case has ordered a Kafka expert to inspect and itemize whatever lies behind the vault. We’ll update as the story develops. Let’s just hope the roaches didn’t get to it first.

(via The NY Observer; image via Unproductive Poetry)