The Comic-Con sneak peek of DC and Warner Brothers’ Justice League movie has finally arrived, and it opens fittingly with the real star of the franchise: Wonder Woman.

In the first scene of the sneak peek, Diana prevents a heist before heading back to her day job at a museum. The scene recycles the bad-ass slow-mo leg sweep from Wonder Woman, and Diana also shows off her bullet-dodging and super-strength powers.

From there, the trailer presents us a “world without hope” following the death of Superman, where “something is coming” and “we don’t have any more time.” The footage also confirms the movie’s villain: Steppenwolf, who’ll be played by Ciarán Hinds. Steppenwolf believes the Earth will fall, because it has “no protectors…no Lanterns, no Kryptonian.” But the League intends to prove him wrong.

As part of the footage, we finally get to see Cyborg in action, and while he gets a little short-changed for screen time here, I did really enjoy seeing him take control of the Nightcrawler.

Jason Momoa continues his tradition of being a joyful drop of DGAF in these trailers, delivering lines like, “Honestly, I think we’re all gonna die” with a shrug and “Woohoo”-ing his way through the action scenes.

Also, look at this queen. 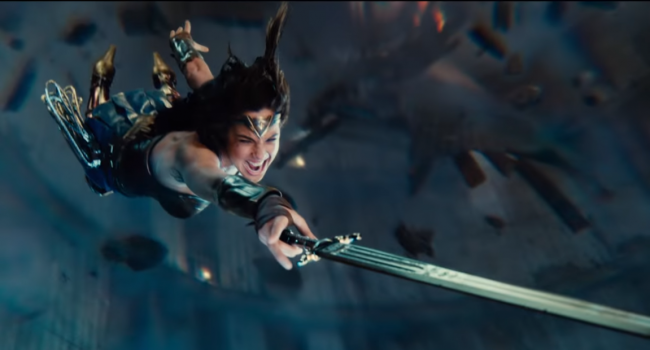 Lastly, I was heartened to see that the lighting looked brighter and more readable this time around. While the aesthetic is still a little videogame-y for my tastes – many of these scenes didn’t look like they took place in the real, concrete world – I could understand what was going on far more clearly. Even the darker scenes felt less “covered in confusing shadow” and more intentionally atmospheric.

All in all, I’m actually starting to feel pretty okay about this one. DON’T PLAY ME AGAIN, DC.