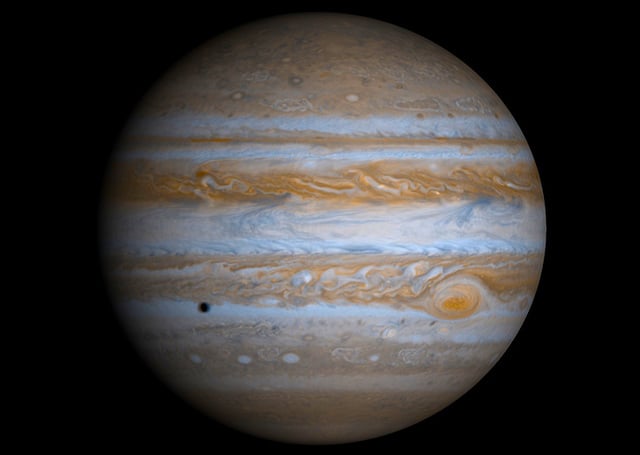 So it’s not quite flying an alien craft into the mothership, uploading a computer virus from a mid-’90s laptop, and blowing the whole thing away to save humanity, but we still got a fantastic outer space milestone this Independence Day: Last night, the Juno probe finally completed its five-year flight to meet up with the giant planet Jupiter and study the gassy world like never before.

Instead of fireworks, out by Jupiter, the Juno probe set off a 35-minute engine burn to slow itself down by 1,212 miles per hour and enable a proper orbit around Jupiter. After that, the probe also had to angle itself to allow its solar panels to recharge from the Sun’s rays as it hangs out around the planet and collects its scientific data. Confirmation that the maneuvers were successful was received at 8:53 p.m. PDT (11:53 p.m. EDT) last night, so we can at least pretend that’s part of what everyone in the U.S. was celebrating.

Things will be quiet for a while as the craft prepares to begin its proper scientific mission, but scientists on Earth have been waiting for this for a while, and they’re not necessarily just going to sit around and wait to get started. Scott Bolton, principal investigator of Juno, said in NASA’s news release, “Our official science collection phase begins in October, but we’ve figured out a way to collect data a lot earlier than that, which—when you’re talking about the single biggest planetary body in the solar system—is a really good thing. There is a lot to see and do here.”

That to-do list includes “investigate the existence of a solid planetary core, map Jupiter’s intense magnetic field, measure the amount of water and ammonia in the deep atmosphere, and observe the planet’s auroras” in order to figure out how Jupiter came into existence and evolved as a planet while shaping the solar system. Not only can that tell us more about our own home, but it’s key to our understanding of the planetary systems around distant stars that we seem to be discovering on a near-daily basis.