The Mary Sue Interview: Chip Zdarksy on the Renaissance of Jughead, “The Teen I Wanted to Become” 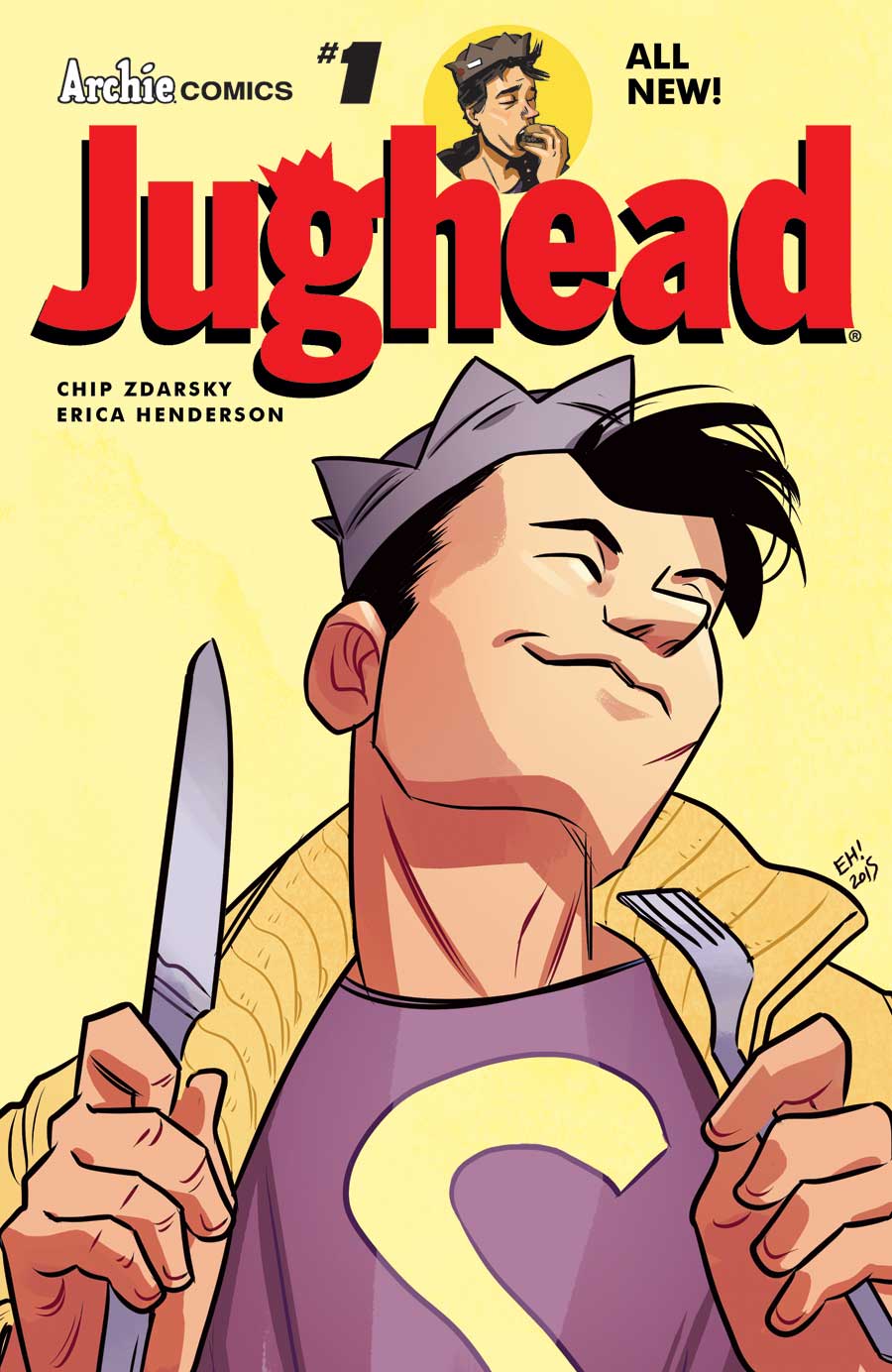 It’s hard to imagine a writer who would be a better fit to write Jughead than Chip Zdarsky, and Jughead #1 (out tomorrow!), proves that. After reading the hilarious, surreal, and surprisingly sentimental first issue, we spoke to Zdarsky over email about collaborating with Squirrel Girl artist Erica Henderson, making sense of Jughead’s obsessions, and whether or not Howard and Jughead would get along. 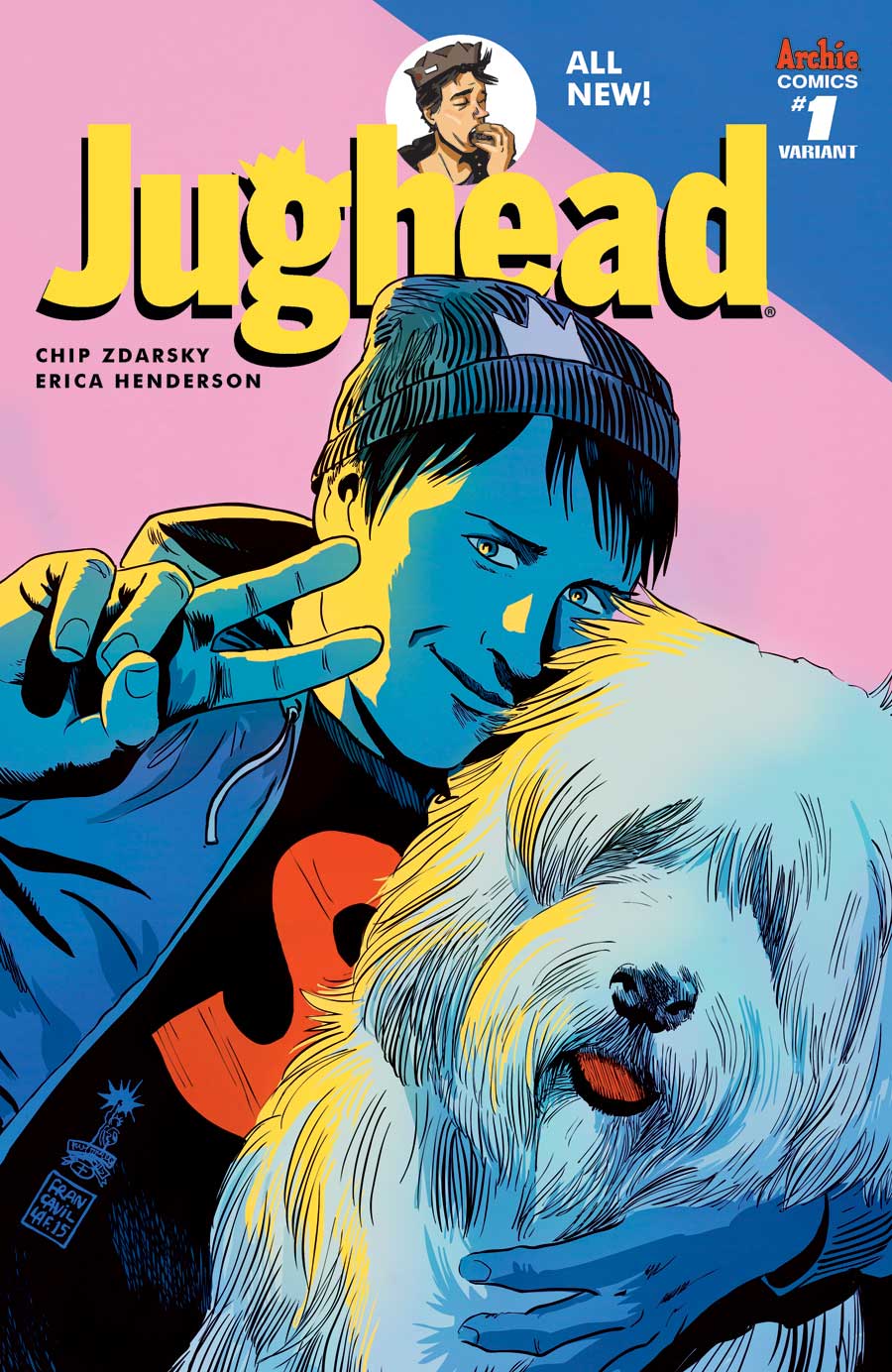 The Mary Sue: What was your relationship to (or familiarity with) Jughead before starting to work on the series?

Chip Zdarsky: I’ve known him all my life! The Archie digests were my first comics, so Jughead was my first introduction to the teen I wanted to become. I eventually transitioned out of Archie comics and into superhero stuff, but once I became an illustrator I fell right back into the Archie books because of the classic artwork. I was also one of the many people who succumbed to the Afterlife With Archie series, which is fantastic and I think really reminded everyone of the potential around these characters.

TMS: I’ve always felt like Jughead was one of the more inexplicably weird members of the gang. Will we get any insight into why he is the way he is?

Zdarsky: Well, Mark and Fiona touch upon that a bit in the main Archie series, so we’re just rolling with it! He’s a teenager, figuring things out, and a lot of that is about identity. He’s the coolest uncool guy around, not a follower, but still a part of the gang. 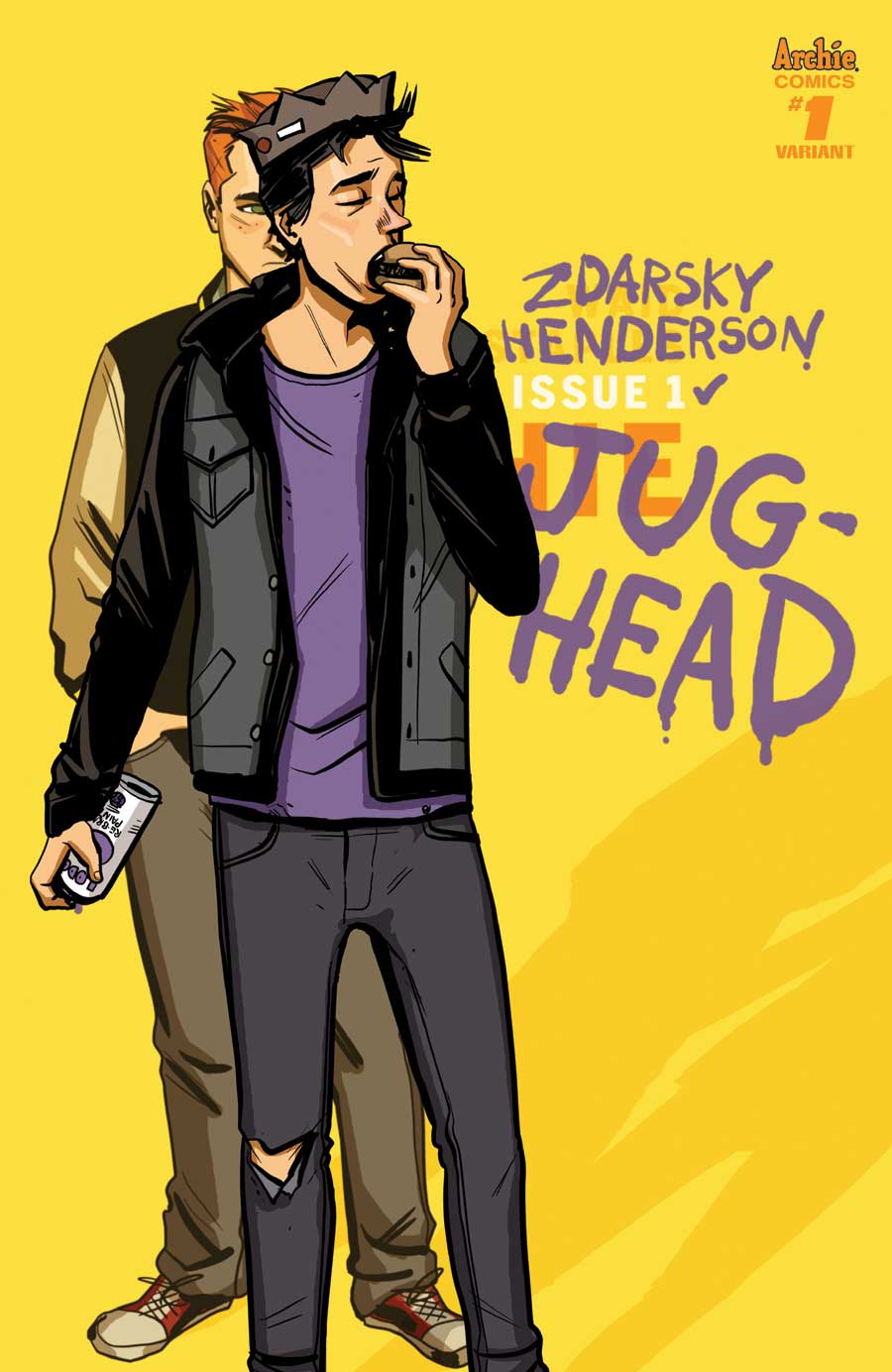 TMS: What’s it like to be writing from the viewpoint of a teenager? Do you have a particular audience demographic in mind when you’re working on Jughead?

Zdarksy: My main demographic is pre-teens, I feel. But I want to make the book enjoyable for everyone! I like works geared towards kids where there’s a level in the entertainment that people older than the target can get into. Like, for example, issue one has a Game of Thrones riff, which obviously no kid should fully get, but I’ve tried to keep it so the GoT stuff is secondary, that the main jokes, and the fantasy setting, work without catching the references.

As for writing a teenager, I’m hoping I’m not too far off the mark given my ADVANCED AGE. You tap into your memories and feelings from that time and observe what’s happening with kids now. But, uh, not in a creepy way.

TMS: Jughead seems like kind of a nihilist from what I’ve seen of #1. Will you be exploring that any further?

Zdarsky: It’s that teen phase where you feel like you’ve got it all figured out and cynicism is king. We’ll explore that outlook as the series goes on and hopefully counter Jughead’s outlook a bit. Betty is his foil there. She’s much more about helping and seeing the good in people, so I’m enjoying having them bounce off of each other.

TMS: Aside from Jughead, what Archie characters were/are you most excited to write?

Zdarsky: I didn’t realize it until I started writing him, but Reggie is so much fun to write. He’s such an oddity. A guy who is kind of the villain, yet still part of the gang for some reason.

TMS: What has your creative process with Erica Henderson been like so far?

Zdarsky: Effortless! I’m a huge fan of her work, so I had no doubt she’d be amazing on this. Obviously she’s great at expressions and gestural work, but I’m mostly astonished at how great her layouts are. The vision I have in my head when I’m writing a page is improved immeasurably when it’s in Erica’s hands. She will be everyone’s boss one day, ruling us all with a talented, iron fist.

TMS: What inspires the pop culture references in the series? Are they based off media that you personally enjoy?

Zdarsky: Yeah! I’m definitely into Game of Thrones. Not, like, to the point of doing sad Jon Snow fan art, but I enjoy it. And we have a pirate story in issue four which is definitely inspired by me just finishing my first video game in years, Assassin’s Creed: Black Flag.

The daydream diversions in the story are my nod to the alternate universe Archie tales I grew up reading. Beyond the general genre stuff we’re putting in specific nods to old Archie stories, like SuperTeens and Time Police. I love the weirder Archie stuff! It’s a nice feeling to keep those going. 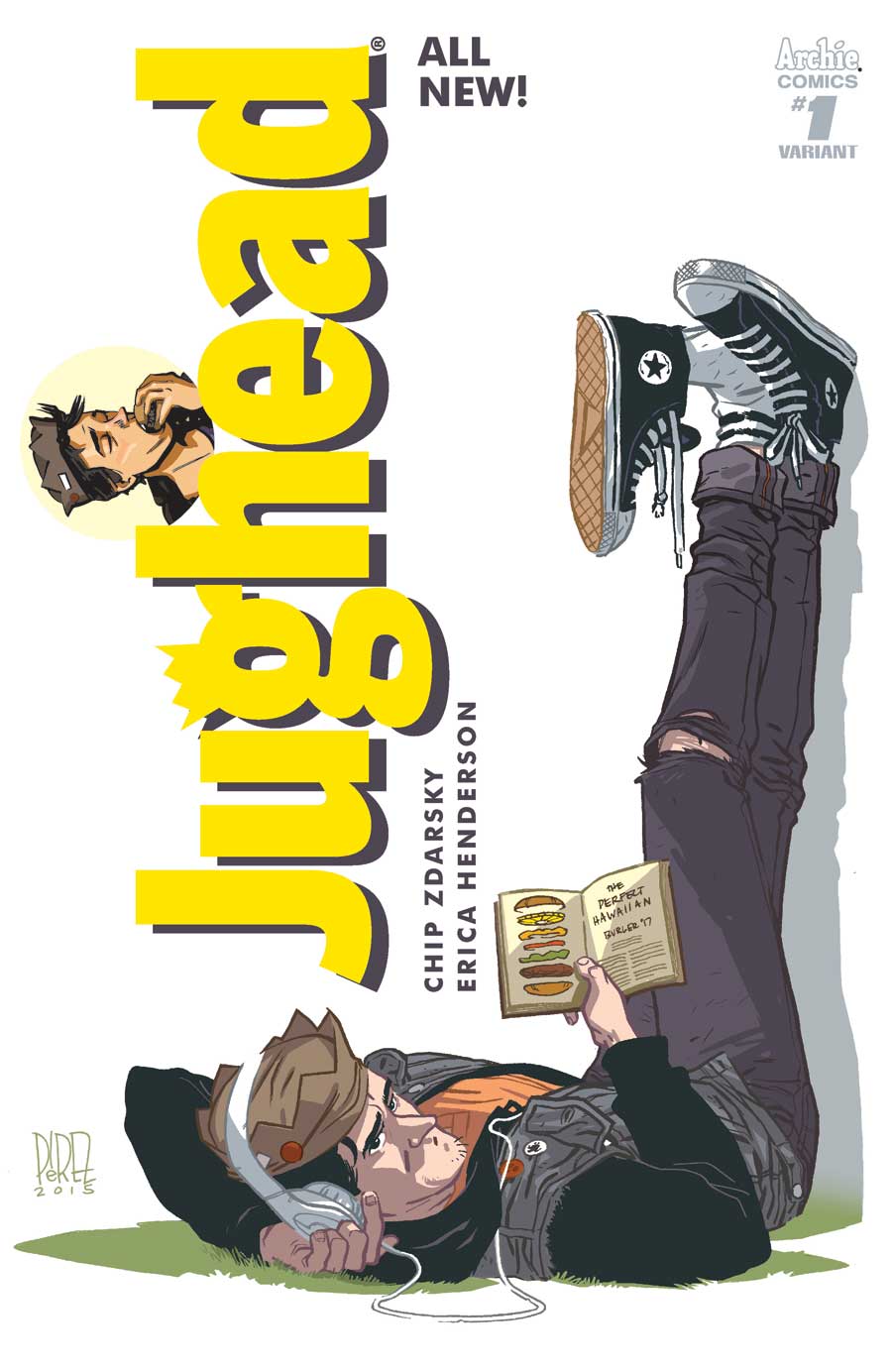 TMS: If Jughead and Howard had the chance to hang out, would they get along?

Zdarsky: Jughead may be too chill for Howard. Or maybe Howard is the terrifying future vision of Jughead? Like the Ghost of Christmas Future But As A Duck?

TMS: Writing an Archie comic (or a Marvel comic), you’re working with characters that have a ton of tradition and history behind them. What’s the most enjoyable aspect of that? The most limiting?

Zdarsky: Marvel books have continuity to deal with, which is both exciting and a little limiting. Exciting cause you get to be part of a bigger universe and see your effects ripple out into the work of others, but you have to abide by the rules and current incarnations of the characters and settings.

With Archie, we so far just have the two books to deal with, continuity-wise, which is nice, especially since the main Archie book is SO GOOD.

The longevity and history of the characters isn’t super-daunting, really. It’s kind of freeing in the sense that so many people have touched these characters over the decades that you’re kind of a blip in the history. It feels more like I’ve just joined a really large family, which is nice.

Zdarsky:  Oh god, uhhhh… I’ve had some amazing meals in my life, but in terms of my day-to-day existence, I have to say Field Roast smoked apple sage sausages. My girlfriend is vegetarian, so we have a no-meat household, and these meatless sausages have won my heart. I never thought I’d say that. In an interview no less! 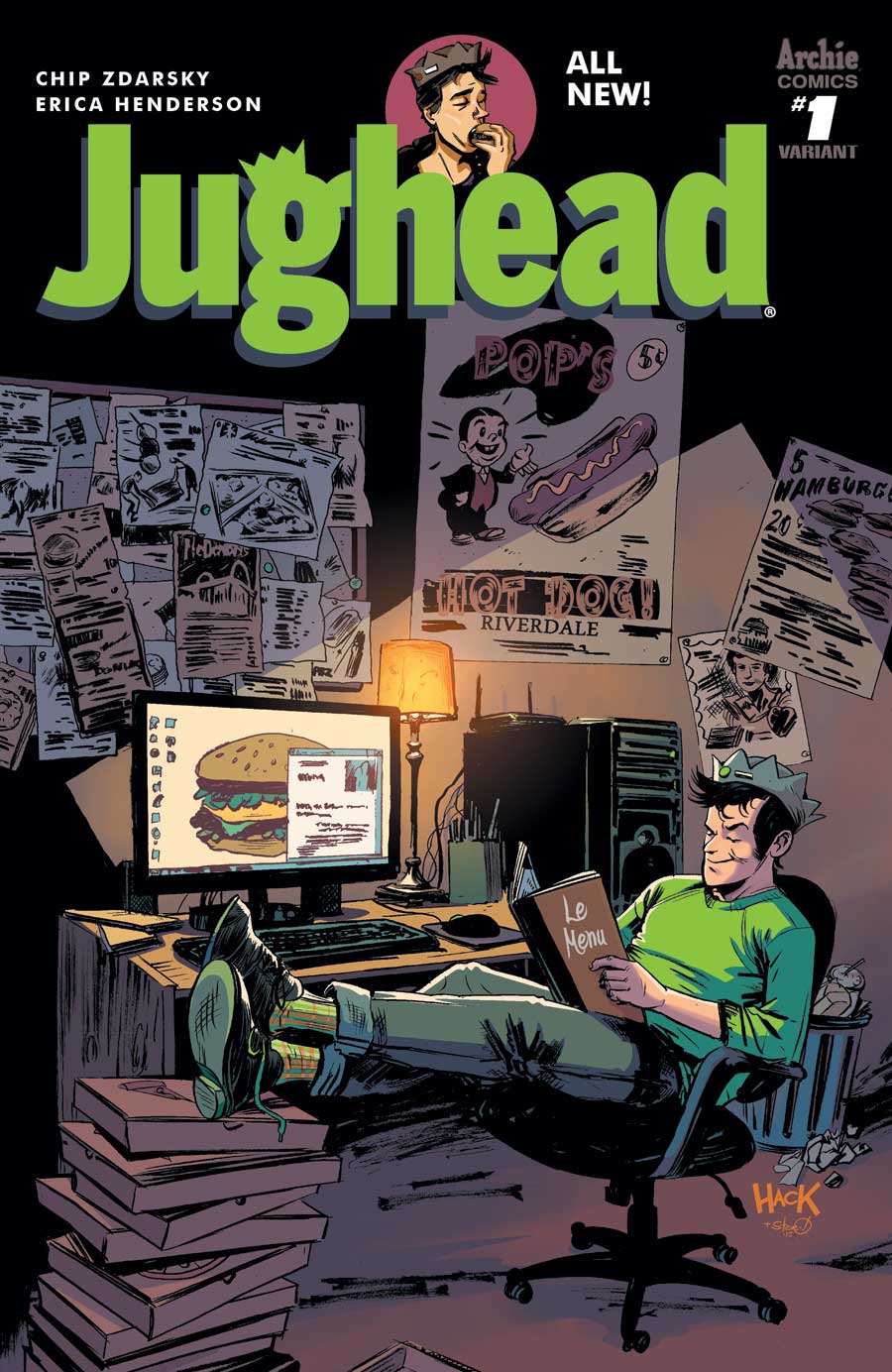