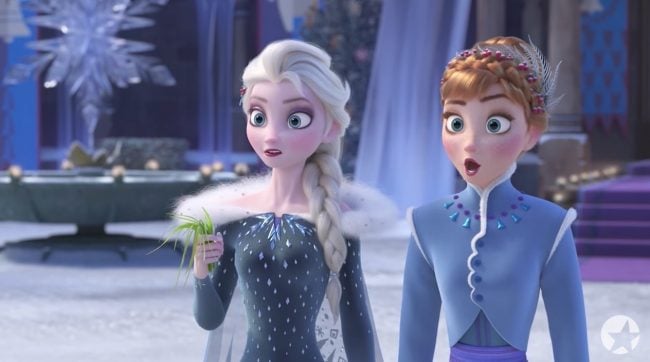 Jordan Peterson, the Canadian professor who rose to fame by framing they/them pronouns as a “freedom of speech” issue, and who has been called “the stupid man’s smart person,” was recently interviewed by TIME about his opinions on the movie Frozen, which he calls “deeply propagandistic.” I honestly can’t make this shit up, so you’ll just have to read his … “arguments.”

“It attempted to write a modern fable,” Peterson said, “that was a counter-narrative to a classic story like, let’s say, Sleeping Beauty — but with no understanding whatsoever of the underlying archetypal dynamics. You could say that Sleeping Beauty was raised out of her unconsciousness via a delivering male. Another way of reading the story is that unconsciousness requires active consciousness as an antidote. And the unconsciousness is symbolized in that particular story by femininity and active consciousness by masculinity. I could hardly sit through Frozen. There was an attempt to craft a moral message and to build the story around that, instead of building the story and letting the moral message emerge. It was the subjugation of art to propaganda, in my estimation.”

Luscombe, to her eternal credit, followed up on this claim.

You regard it as more propagandistic than say, The Little Mermaid? Those other movies are based on folktales that are maybe — some of those folktales have been traced back 13,000 years.

Aren’t we allowed to make up new stories? Not for political reasons.

So just to be clear: Hans Christian Anderson published “The Little Mermaid” in 1837. Disney radically rewrote his ending to the tale so that Ariel survives and marries Prince Eric rather than collapsing into sea foam. Not propaganda.

Hans Christian Anderson published “The Snow Queen” in 1844. Disney radically rewrote the ending to the tale so that two sisters save each other with their love, rather than two childhood friends. Propaganda.

Luscombe then asks Peterson “who gets to choose what’s propaganda.” Peterson argues that “a properly balanced story provides an equal representation of the negative and positive attributes of I could say the world, but it’s actually a being. Harry Potter’s a good example. So Harry’s the hero, right. But he’s tainted with evil. There’s a dark and a light in every bit of that narrative. It’s well balanced. And in the propagandistic story, you don’t see that. You see the darkness all being in one place and the light all being in one place.”

Luscombe again follows up on that bland and nonsensical statement, and finally, Peterson tips his hand and reveals that he seems to be angry because Frozen has a plot twist.

Isn’t the darkness and the light in Elsa, who has the power to freeze things, for good or ill? The most propagandistic element of Frozen was the transformation of the prince at the beginning of the story who was a perfectly good guy, into a villain with no character development whatsoever about three-quarters of the way to the ending.

He was a villain the whole time! He was a wolf in sheep’s clothing! That’s how it turned out in the end, but there was no indication of that at the beginning.

That’s good story craft — not tipping your hand. Like The Crying Game. It’s certainly possible that I’m wrong about Frozen, although I don’t think so.

I’m sorry. This is just the funniest thing I’ve ever seen. First off, he totally dodged Luscombe’s question about Elsa, because she is rather obviously correct that Frozen looks at both the light and darkness of having power—especially female power in a world that is afraid of it.

But then we get this gem about Prince Hans: “There was no indication of that in the beginning.” First of all, did we watch the same movie? Sure, the hints were subtle—but like, by children’s movie standards. Did Jordan Peterson really watch the “We finish each other’s … sandwiches!” sequence and interpret it as an earnest, deadly serious indication of true love?

By this logic, all murder mysteries ever written are vile propaganda. The Sixth Sense is a PSA. Macbeth is a Maoist poster. M. Night Shymalan is the one true propagandist of our age.

Now, all that said, I would certainly agree that Frozen, like pretty much all works of art, does have an artistic and a moral point of view. (As George Orwell famously said, all art is in some sense propaganda.) But I will never stop giggling at the idea that it is uniquely propagandistic among all of Disney’s animated films, just because Prince Hans turns out to be evil and the story wasn’t around when the last woolly mammoth died. Come on, now.

Bless Belinda Luscombe for this interview.