Sure, John Kelly Criticizes Trump With No Power Left to Lose | The Mary Sue

My, How Bravely John Kelly Criticizes Donald Trump With No Power Left to Lose 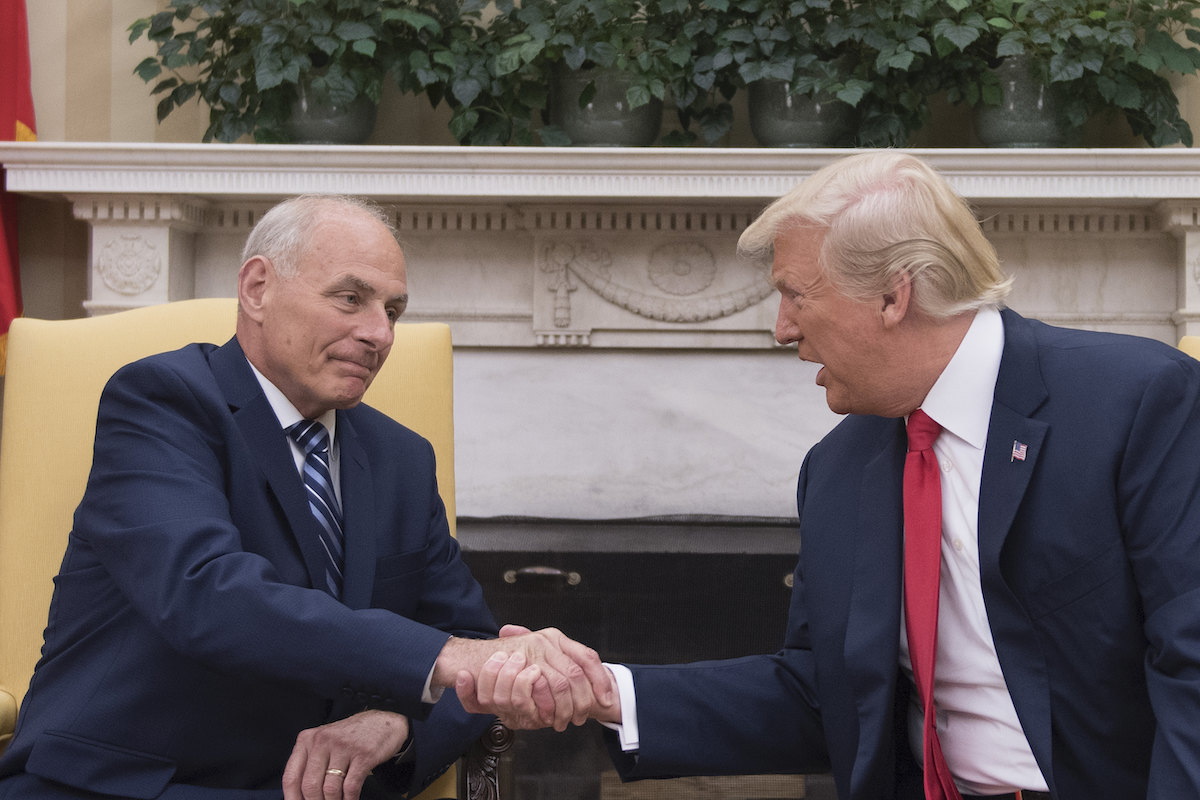 In a 75-minute speech and Q&A session Wednesday night, former Chief of Staff John Kelly told students at Drew University all the ways in which he disagrees with the actions of his former boss, Donald Trump.

Kelly defended Lt. Col. Alexander Vindman’s decision to comply with a Congressional subpoena and testify in the impeachment inquiry, saying, “He did exactly what we teach them to do from cradle to grave. He went and told his boss what he just heard.”

He also contradicted Trump’s claims that his phone call with Ukraine’s president was “perfect.” He said that Trump’s decision to make military aid conditional on investigating the Bidens (which is exactly what happened, according to Kelly … and anyone else who read even the edited “transcript” of the call) was a major shift in foreign policy, so absolutely something Vindman should have reported.

Congratulations to John Kelly for having the courage to defend Vindman and speak out against Trump now that the impeachment trial is over and Vindman has been fired and slandered. Way to give the appearance of taking an ethical stand without actually putting anything at all on the line. In terms of doing the least, this is really up there on the same level as John Bolton writing a book instead of testifying before Congress.

In addition to criticizing some of Trump’s diplomatic relationships with dictators, Kelly contradicted some of Trump’s rhetoric on domestic issues, like his constant vilification of the press.

“The media, in my view—and I feel very strongly about this—is not the enemy of the people,” he said. “We need a free media.”

Agreed! Which is why we all had such a negative reaction that time Trump was presented with a sword at a Coast Guard commencement ceremony and John Kelly was caught on a hot mic joking that he should “use it on the press.” What a fun joke to make to an authoritarian who consistently encourages malice and even violence towards the media!

“In fact, they’re overwhelmingly good people. … They’re not all rapists, and they’re not all murderers. And it’s wrong to characterize them that way. I disagreed with the president a number of times,” he said.

This is the same man who wrote the proposal to use National Guard troops for immigration roundups. He also defended the Trump administration’s policy of family separation, saying, “The children will be taken care of—put into foster care or whatever.”

That “whatever,” of course, ended up being unhygienic and inhumane detention camps along the border. Kelly knows that, though, since after he left the White House, he joined the board of one of the contractors running those camps. But sure, show everyone how brave you are by saying Trump’s words are too mean.

Back when John Kelly was actually in a position to do something about the president’s policies, he told NPR that people coming over the border are “not people that would easily assimilate into the United States into our modern society.” https://t.co/5VQlJiU4ec https://t.co/06QgfCpCTI

He also rescinded an Obama memo on immigrant parents without criminal records, making them vulnerable to deportation that would rip their families apart.
In this new intvu he says he was “just doing his job.” That phrase.

John Kelly, the man who once said the “lack of an ability to compromise” is what led to the Civil War, is very clearly starting his post-Trump image rehabilitation tour. He’s not the first person to attempt to reframe his own narrative, turning complicity in Trump’s actions into a story of “I just wanted to make him less evil” and “I was just doing my job.” It’s a sham. Every single one of these people—Kelly, Bolton, Sean Spicer, Sarah Huckabee Sanders—stuck around until Trump fired them, usually via tweet, doing his bidding and staying quiet about any misgivings until they were so far removed from power that they had nothing left to lose. They don’t get to rewrite that history now.