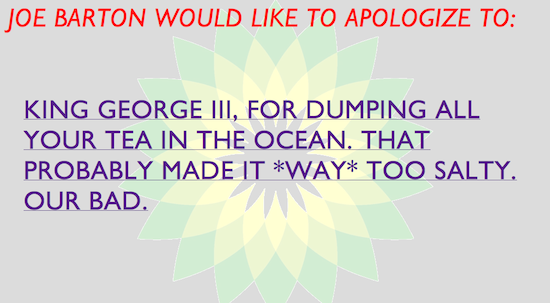 Earlier today, Republican Congressman Joe Barton apologized to BP CEO Tony Hayward for what he called a “$20 billion shakedown” on the government’s part with respect to BP in the wake of the oil disaster in the Gulf Coast; thereafter, Barton ‘apologized’ for his apology, saying his words had been subject to “misconstruction.”

Tech journalist and Internet provocateur Mathew Honan has put together a handy site in which you can read Barton’s ‘apologies’ to such misunderstood figures as King George III, the Confederacy, tobacco companies (“for the off-putting warning labels”), Kim Jong-Il, and (low blow?) AT&T.