What Was Up With Jimmy Kimmel Making Fun of Mahershala Ali’s Name at the Oscars? 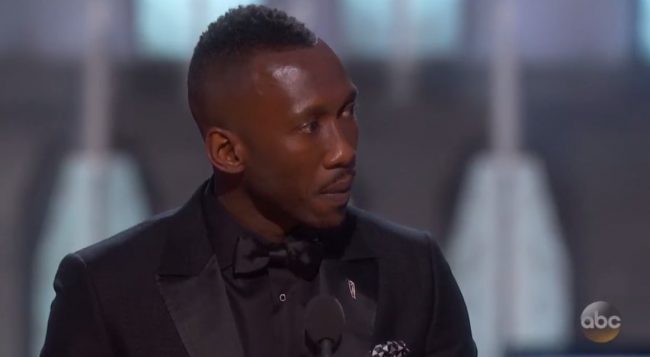 There were many well-deserved awards at the Academy Awards last night, and with such a politically charged atmosphere there were also a number of moving and extremely relevant speeches from people of color, from Viola Davis’ acceptance speech for Fences, to Asghar Farhadi’s boycott, to Gael García Bernal speaking against walls during his presentation. These were wonderful reminders of how films can foster community, acceptance, and tell the stories of people who are forgotten or ignored.

Impossible to ignore, however, were moments that seemed to come from a completely opposite side, from what looked like Hollywood’s forgiveness towards racist Mel Gibson, an Oscar for Casey Affleck, and host Jimmy Kimmel’s complete inability to hold his tongue when confronted with a non-western name.

Kimmel’s jokes about names are a classic example of a racial microaggression, something that many viewers noted during the Oscars. The first instances were his comments towards Mahershala Ali, who took home an Oscar for his amazing performance in Moonlight, which also won Best Picture. Ali, in his speech, thanked his wife Amatus Sami-Karim, who had given birth to their first child four days before. It was a sweet moment followed by Kimmel tastelessly saying, “You can’t name her Amy,” a joke where the punchline is that Mahershala’s name is different from what a lot of us might be used to. The joke is that Amy is a “normal” name while “Mahershala” is not. (His daughter’s name is Bari Najma Ali, by the way.) It’s a joke he recycled from having the Moonlight actor on his show last month, in which he said, “You can’t name your kid Doug.” When Ali says they were going for something simpler, but still unique Kimmel says “I think that’s the merciful thing to do” and later on adds, “We were thinking of naming our next child Pineapple.” Ali gives a polite laugh at Kimmel’s jokes both times, as many people of color in these situations often do.

This is pretty rude for a number of reasons, one of them being that Mahershala has already shortened his name for Hollywood. His full name is Mahershalalhashbaz, the symbolic name of prophet Isaiah’s second son. In one anecdote, he says it was more for the sake of length, so his name would be on movie posters. Here’s another clip of him on Jimmy Kimmel, again, talking about his full name. Ali talks about his name with charming humor, but those kind of jokes come across as questionable at best coming from the mouth Jimmy Kimmel, whose full name is James Christian Kimmel.

At another point in the show, Kimmel asks the audience to say “Mahershala” in place of “Surprise” when they welcome an unsuspecting tour group. When that tour group arrives, Kimmel talks to a few of them including an Asian American woman named Yulree. When he moves on to talk to her husband, whose name is Patrick, he says, perhaps without thinking of the implications, “See, that’s a name.” The joke is, again, that Patrick is a common name that someone like Kimmel has heard many times before, while he’s perhaps met fewer Yulrees. The joke is that her name is less legitimate because it’s “different.” The joke is that it’s “weirder” because you haven’t heard it before. The joke is racist.

It’s racist because individuals with more “ethnic” names have to constantly deal with ridicule in the United States. As much as people complain about whites losing opportunities to the diverse PC police, “black-sounding” names deal with a huge amount of bias from employers. Nearly all my Asian-American friends and family who have more “Asian” names use an alternative name (something like Amy or Patrick) to make it easier for Americans to talk to them because they can’t be bothered to learn three syllables in a tongue they’re not used to. “Ethnic” or “weird” names can be full of meaning–they’re one of the first things our parents give to us and they can represent hopes, culture, and more. They’re history, not punchlines.

People in Hollywood, particularly, change their names all the time. This can be to avoid sharing a name with another famous celebrity, to give yourself a cooler name, or to make yourself more marketable by covering your ethnicity. It’s why Charlie Sheen doesn’t go by Carlos Irwin Estevez, why Ben Kingsley doesn’t go by Krishna Bhanji, and why we know the name Rita Hayworth and not Margarita Carmen Cansino. Would we still love and know Natalie Portman if she was still Neta-Lee Hershlag? I don’t fault any celebrities who have or want to change their name, only the industry that seems to equate whiteness with both marketability and some kind of default.

In words of wisdom, Uzo Aduba (whose name was also mocked at the 2015 Emmys) told The Improper Bostonian her mom once said, “If they can learn to say Tchaikovsky and Michelangelo and Dostoyevsky, they can learn to say Uzoamaka.” Making fun of names like Mahershala and Yulree contribute to this culture, in which it’s seen as acceptable to poke fun at names that have real meaning simply because they’re not “conventional” in your world. It leads to kids feeling embarrassed about their names, their culture, and assimilating to avoid that situation altogether. They have no place in an industry that wants to celebrate diversity and cross-cultural exchange. Mahershala succeeded with his name and became the first Muslim actor to win an Oscar–he deserves your respect.