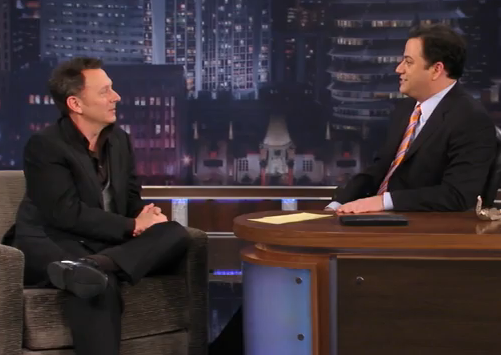 Last night, LOST fans had an embarrassment of riches to deal with: first, a new episode, “The Substitute,” and later, a great Jimmy Kimmel Live! interview with Michael Emerson, a.k.a. LOST‘s charming, conflicted sociopath Ben Linus.

Jimmy Kimmel seems like a bit of a LOST superfan himself: you may recall that two weeks ago, he cleverly spoofed the Season 6 premiere. (Though it’s worth noting that both Jimmy Kimmel Live! and LOST fall under ABC’s umbrella.) And his interview with Emerson/Linus bespoke more than the obligatory level of interviewer interest and preparation: Kimmel had plenty of questions about the show’s increasingly arcane chronology and what to expect by the end of the series — and, as any fan would do, he tried his darnedest to find out if and when Ben Linus was going to die this season.

Just as real Ben Linus would be, Michael Emerson was elusive, but dropped the hint that whatever happened, he had shot some great, as-yet unaired scenes with Terry O’Quinn, a.k.a. John Locke.

The exchange that will induce the most simultaneous love and pain in LOST fans takes place at the 3:15 mark in the first video below:

KIMMEL: Do you feel like … that a lot of [the loose strands] have come together, or are they still…

EMERSON: Yeah. I mean the audience will have the pleasure of knowing that pretty much every episode this season, a big chunk of puzzle falls into place. But at the same time, new mysteries arise.

KIMMEL (echoing the frustrated sentiments of every LOST fan): See, I don’t like that! I don’t want a new puzzle. I want the old puzzle to be finished, and we hang it on the wall. That’s what I would like.

EMERSON: I think I can assure you that you’re going to have a satisfying conclusion to the series.

Emerson cautioned that he didn’t know what the ending was yet — but was that a Ben Linus mind game?

Here’s part 1 of the Kimmel interview: