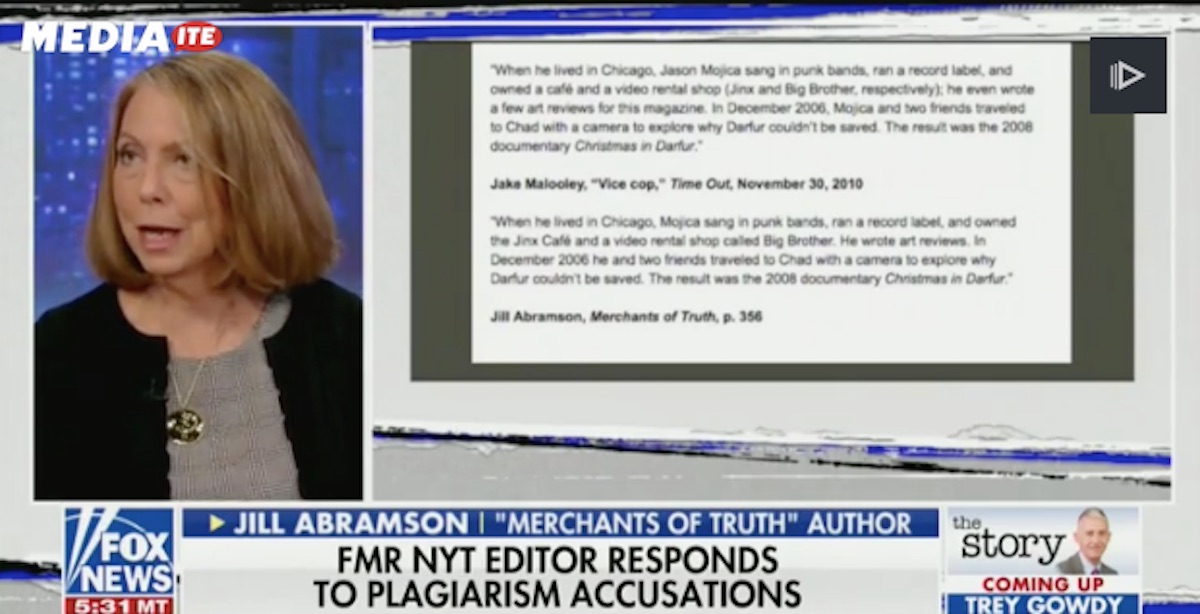 If you follow anyone who’s active on “media Twitter,” you’ve no doubt seen the news that former New York Times executive editor Jill Abramson—the first woman to hold that vaunted position—has been accused of multiple incidents of plagiarism in her new book, the now-ironically-titled Merchants of Truth: The Business of News and the Fight for Facts.

Earlier in the week, Abramson was on a press blitz for the book when she caused a kerfluffle of another sort. The first head-scratching moment to emerge followed an interview with The Cut, in which Abramson revealed that she never recorded interviews as a reporter because she has “an almost photographic memory.”

Needless to say, media Twitter had a field day with this Abramson anecdote, which writer Anthony Breznican described as “breathtakingly bad journalistic advice.”

No. Never do this. This is not a gray area. If anything, use TWO recorders. pic.twitter.com/DHFUekBWPG

The real tell is her claim that she has “almost photographic memory” and so never records her interviews. As someone who interviews faculty and transcribes those interviews for a living I can safely say: She’s lying or delusional. /1

This turned out to be only the tip of the iceberg that was to emerge in full a few days later. Here’s a bit of background on the book: Abramson’s Merchants of Truth, in its official summary, promises to be “the groundbreaking and gripping story of the precarious state of the news business told by one of our most eminent journalists.”

Abramson looks at The New York Times, The Washington Post, BuzzFeed, and VICE in the digital age (the latter two are in possession of “a ballooning and fickle audience of millennials,” who are no doubt killing Real Journalism alongside consuming copious amounts of avocado toast).

Many in the media—especially those whose companies and work may have been given unflattering profiles by Abramson—were intensely interested in what Merchants of Truth had to say. Then on Wednesday, VICE News Tonight correspondent Michael C. Moynihan laid out plagiarism accusations in a damning Twitter thread.

Even more damning, Moynihan’s finds are from only a single chapter (about VICE); judging by the pattern here it’s likely there are many more instances of this sort of flat-out copy/pasting and lazy, half-hearted rewrites of existing material throughout the book.

So…Jill Abramson’s book has finally hit bookstore shelves. A few weeks ago, reading a galley copy, I noticed an egregious error about my colleague @adrs. She tweeted it out, a shit storm followed, Abramson corrected the mistake.

When the book hit shelves, Moynihan uncovered multiple instances of what he describes as plagiarism.

*All three* chapters on Vice were clotted with mistakes. Lots of them. The truth promised in Merchants of Truth was often not true. While trying to corroborate certain claims, I noticed that it also contained…plagiarized passages.

The following examples from the final book—not the galley—are only from the Vice chapters (I didn’t check the others). So let’s begin…Here is Abramson on Gavin McInnes (whom she interviewed) and the Ryerson Review of Journalism https://t.co/hx0XcyZ89k pic.twitter.com/qroN59gyVk

This passage, on former Vice News editor Jason Mojica, is lifted from a 2010 Time Out magazine piece, with small modifications: https://t.co/csNoONZQhX pic.twitter.com/aiQzwKEStl

This paragraph can be sourced to two places: a *masters thesis* and a 2013 New Yorker piece by Lizzie Widdicombe https://t.co/ZWX5RgKxlahttps://t.co/Ux6gdDO9Qg pic.twitter.com/tSIKyRoKDP

This example is from one source–the New Yorker again–though the two sentences are separated by a page.https://t.co/Ux6gdDO9Qg pic.twitter.com/m3dnsQaOmv

There’s lesser stuff too; still problematic. At various points in Merchants of Truth, rather than toil in the archives, reading old issues of the magazine or watching old Vice videos, Abramson liberally borrows from those who have: https://t.co/Ux6gdDO9Qg pic.twitter.com/mEvufhFJ3J

There’s plenty more–enormous factual errors, other cribbed passages, single or unsourced claims–but this should give a sense.

The book ends with a final wag of the finger, reminding me that my colleagues apparently don’t possess “the expertise to compete on the biggest news stories.” If Abramson is the arbiter of ethics & expertise, I think we’re doing just fine.

Not only is there little doubt, if you read these excerpts, that the original passages were reworked and often outright copied in Merchants of Truth, but as anticipated, more examples have since been claimed.

THREAD: Jill Abramson plagiarized me at least seven times in her new book, Merchants of Truth.

What’s astonishing about this isn’t simply plagiarism, which unfortunately happens more than we’d like to think (especially in books, which are generally not fact-checked with the rigor of print media or at all). It’s that someone with the name recognition and high profile that Jill Abramson commands would be so sloppy and derivative in a book about her industry. Abramson now teaches at Harvard; her Twitter bio lists her as a “Creative writing professor.” The syllabus for her “Journalism in the Age of Trump” class assigns Merchants of Truth as required reading.

per the syllabus for jill abramson’s spring 2019 course on journalism in the age of trump, she has assigned her own book as reading for the first two weeks. the second week is on journalistic standards. pic.twitter.com/O1Bimgdvvd

glad that a journalist facing accusations of plagiarism and who engaged in pretty obviously unethical practices is teaching a class on how to report in the trump era https://t.co/w3P14HH6DH https://t.co/B4Bxe3uB7v

Abramson hasn’t handled the recent accusations with much coherence, at first denying them entirely and also lashing out at VICE journalists for being upset about her depictions of the outlet and its employees.

Jill Abramson is on Fox right now dismissing the plagiarism accusations against her book: “I don’t think it’s an issue at all…Many people from Vice have been taking issue with the book.”

As you might imagine, this didn’t sit too well with some of the VICE journalists.

as one of the ethnics with cool hair at Vice News Tonight who was totally dismissed by Jill Abramson as ‘not a real journalist,’ let me issue the following statement. pic.twitter.com/huNavETHPT

Abramson has pointed to more than 70 pages of footnotes in the book as proof that sources were cited. From what we’ve seen here, however, it’s evident that there are many passages where she does not make it clear that quotes are taken from other reporters’ profiles and interviews (rather than the implication that the subject spoke to her directly). Many sentences created by other people are dropped in without attribution, often without even an attempt to rephrase them.

The Washington Post reviewed end notes in the back of Abramson’s book, which refer to pages where she used material that was not her own. There is no indication in the main text of the book showing which passages require attribution.

After the heat intensified, Abramson could no longer brush off the accusations and tweeted a lackluster response:

My friend has a theory about how and why that Tweet arrived looking the way it did: 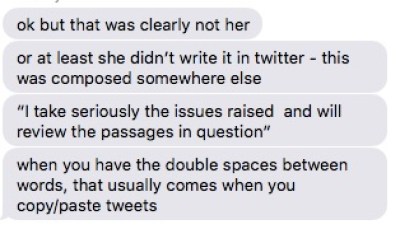 How could Abramson have believed that no one would notice all of the cribbing in Merchants of Truth? She ran the paper of record for years and was the first woman to hold the job of executive editor in the Times‘ 160-year existence. Any high schooler knows to show your sources—if you want to reproduce someone’s turn of phrase, quote them directly, give them credit in-text, and footnote every idea that came directly from someone else’s work.

It’s jaw-dropping that the most basic, essential rules appear to have been ignored here, in a highly publicized book by a big name journalist who teaches at Harvard about writing and journalism.

“We are facing a crisis in trust that threatens the free press,” blares the copy on Merchants of Truth‘s description, a sentence now so deeply ironic that it reads like something from The Onion. “Abramson’s book points us to the future.”

It’s vital in an era where the media is under constant attack by the Trump administration not to give its opponents any fodder. That this scandal is happening in regards to a book about anxieties in our current-day media, by a well-known media figure, is as puzzling as it is infuriating.

Maybe the publisher should reconsider their current pitch?

With these strong allegations of misconduct by @JillAbramson , you’d think the publisher @simonschuster would hold off on advertising it. Regrettably, this is the new norm for book publishers. pic.twitter.com/Skf7kjkbNF

[UPDATE, 6:15 PM EST]: Abramson spoke with NPR’s Michel Martin about the plagiarism allegations. She acknowledged that some of the language in her book is “too close for comfort” to the sources and that her footnotes should have had better citations. You think?

Abramson appears to be dodging any major responsibilities, however, promising that changes will be made in order to make her book “flawless.” But she laments that perhaps she did not spend “enough” money on fact-checking and the assistants who helped with research and “in some cases, the drafting of parts of the book.”

Per NPR, in their piece ‘I Fell Short’: Jill Abramson Responds To Charges Of Plagiarism, Inaccuracies:

In an interview Thursday with NPR’s Michel Martin, Abramson admits she “fell short” in attributing her sources for some passages of the book. She also argues that much of the criticism now surrounding her has come from Vice, whose reporters have not taken kindly to her portrayal of the media organization in the book. Abramson also says had ample time to review the sections of the book about it before publication.

“In several of these cases, the language is too close for comfort, and should have been specifically cited in the footnotes correctly,” Abramson tells NPR. “Or put in quotations in the book.”

“The problem here is that though I did cite these publications and try to credit everybody perfectly, I fell short,” she admits.

“In the cases that Michael Moynihan cited, there isn’t the correct page number for the credited citation. I’m going to fix those pronto and am determined to make my book flawless and will fix these things as absolutely soon as I can.”

“The issue here is it’s a 500-page book, and these are a few problems in it,” Abramson says. “These complaints by Vice are a minor part of the book.”