If the Strike Witches had a pet turtle, it would be this guy. 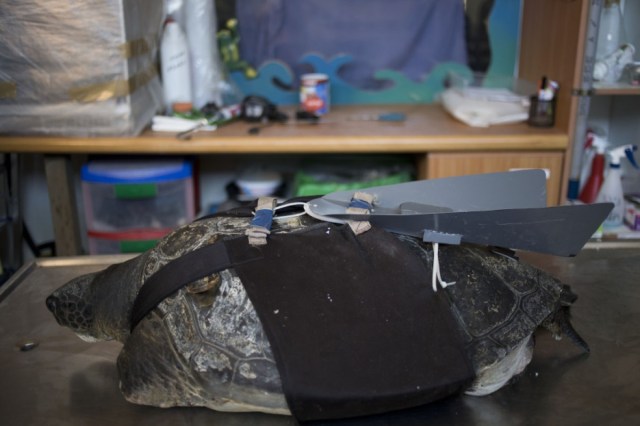 Usually if you’re a turtle and you lose a vitally-important flipper, it’s all downhill from there. Lucky for Hofesh, a sea turtle amputee, the kind folks at Isreal’s Sea Turtle Rescue Center have developed a solution for special-needs turtles – one they developed from a fighter jet.

Hofesh was tragically caught in a fishing net back in 2009, and needed his left fins amputated after he was rescued. Since our poor turtle friend would panic every time he was put into water (like you probably would if you didn’t have your left leg or arm), the folks at the Turtle Rescue Center knew they were going to have to come up with a prosthetic for him.

After attaching a diver’s fin proved unsuccessful, they designed a dorsal fin based on the design of an F-22 Raptor fighter jet. This new fin stops Hofesh from panicking and allows him to paddle around, problem-free. While he can’t be released back into the wild, he’s currently sharing a tank with a blind lady-turtle called Tsurit. They’re special-needs turtle friends, and the Rescue Center hopes they’ll make lots of tiny turtle babies.

This is the happy turtle story we all needed today.