Jessica Williams Does Science With Emoji and Tacos | The Mary Sue

Queen Jessica Williams Studies Chemistry, Emoji, and Tacos in the Name of Science

What is the chemical composition of Feminized Atmosphere? 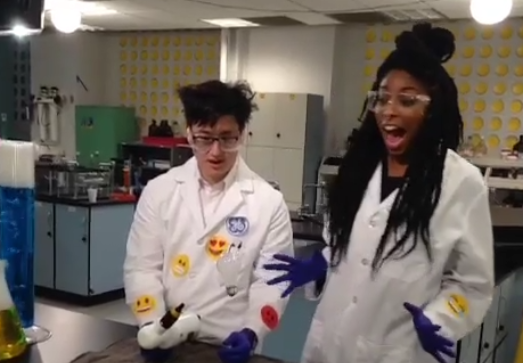 Over the weekend, The Daily Show‘s Jessica Williams donned a lab coat and headed over to NYU’s chemistry department as part of Emoji Science, an event coordinated by General Electric and Snapchat. (Bill Nye even tagged along!)

Williams told the The Daily Dot that experimenting in the lab helped her overcome a sense of unworthiness when it comes to STEM: “Science, I always found very intimidating. It felt very inaccessible […] As soon as it got to numbers and codes I was like ‘Oh, that’s enough for me.’ But what’s fun about today is that emoji are very accessible to me so that’s probably the easiest way for me to break into the science community.”

Williams and the team spent a day conducting VERY IMPORTANT EXPERIMENTS (you did not die in vain, tacos), an aspect of science that Williams says she relates to more easily: “I love having my mind blown […] I like science in the same way that I like magic tricks … I like an oh-em-gee reaction. The cool thing that’s different than an illusionist show is that science is perfectly explainable.”

In addition to overcoming some of her fear of science, Williams also pointed out that emoji are still in dire need of more diversity: “I would definitely love some black lady emojis.”