Review: Jessica Jones Is Brilliant and Brutal, so View at Your Own Discretion

Jessica Jones is here! Everybody ... SMILE! 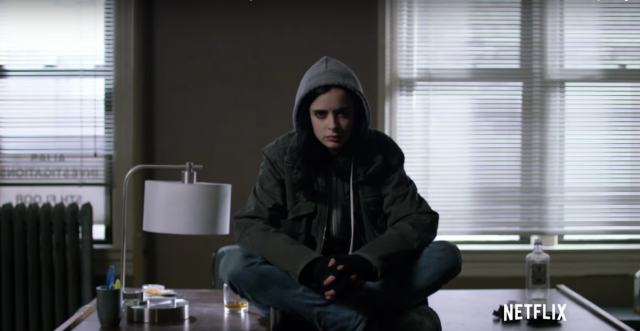 You know, I try not to get my hopes up too much these days. After the anticlimactic build up to Agents of S.H.I.E.L.D and Avengers: Age of Ultron, I make a point of not getting carried away with hype. So, it’s a good thing shows like Jessica Jones exist to remind me that sometimes the final product really can be as good as the marketing made it seem, because Jessica Jones is amazing … if it’s the sort of thing you’re looking for.

I add that caveat because Jessica Jones isn’t everyone’s cup of tea. The friend I marathoned it with, whom I shall refer to as Binge Buddy, ruled less favorably on it than I did, largely because of the show’s emphasis on trauma. Indeed, our heroine suffers from PTSD. On several occasions, she struggles to function through her panic attacks, triggers, and nightmares, and she’s certainly more afraid of Kilgrave than Thor or Tony Stark ever are of their adversaries. Binge Buddy felt this reduced the MCU’s first female lead to a damsel in distress who just happened to also be the hero. While I disagree (I really like that the show takes such an unflinching look at what PTSD is like without stripping the sufferer of agency or requiring rescue from a third party), it certainly makes Jessica Jones a different kind of superhero story, one that is at times difficult to watch. If that’s not your thing, fair enough, but for me, I loved it.

Krysten Ritter is excellent as our titular heroine. She carries the show with dark, dry humor and a core sense of morality that seeps through her otherwise calloused persona. She’s also less made-up than other MCU heroines. She lacks the perpetually styled hair of S.H.I.E.L.D’s female agents or Natasha Romanoff’s slick fashion sense. She genuinely looks and acts like someone who simply does not give a damn, which, for someone sick of female characters always looking like they just left a salon, is much appreciated. 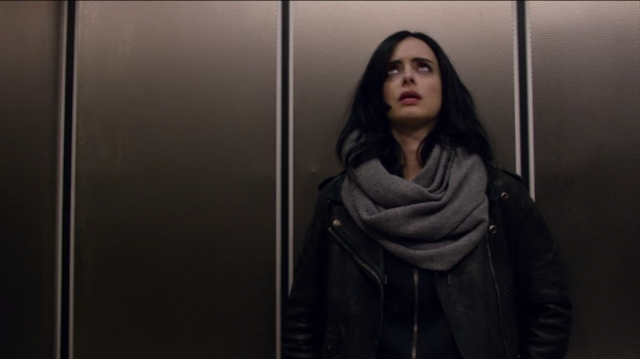 The show also benefits from a strong ensemble cast. While the actors aren’t always saddled with the best material (I’ll get to that in a second), they all deliver with what they’re given. Eka Darville in particular deserves praise for his unexpectedly dynamic performance as Malcolm, Jessica’s druggie neighbor.

And then there’s David Tennant as Kilgrave, who has now usurped Loki’s place in my heart as the best MCU villain. Seriously, where do I even start? I have never before encountered a villain who evokes such a range of emotions from his audience. The show spends so long establishing the severity of Jessica’s PTSD and the trail of broken lives Kilgrave has left in his wake (there’s a scene in which a man requests a mercy killing in episode 2 that might stay with you for a while) that by the time we meet him properly, all Kilgrave has to do to be scary is … be in the shot.

That alone would have distinguished Kilgrave as an MCU baddie, but Jessica Jones takes it one step further. It waits until we’re thoroughly disgusted and terrified of him and then dares us to like him—to pity him, even. 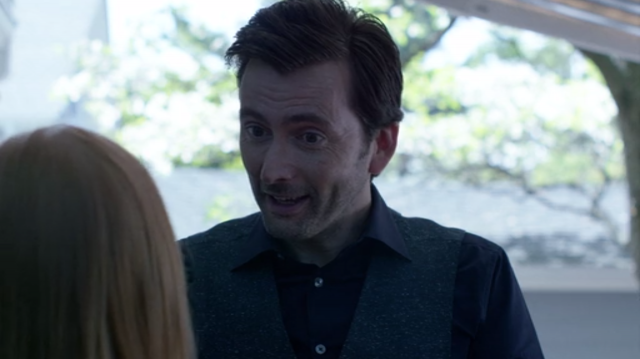 This … is not what I was expecting.

Tennant opens his mouth, and all this sharp wit and charisma comes tumbling out. He cowers in the fetal position, trying to block out audio from some seriously disturbing home footage, and it’s difficult to know how to feel. The more we learn about his perception of his relationship to Jessica, the more apparent it becomes that he’s not sadistic but selfish and pathetic. It’s jarring and a little disturbing to have conflicted emotions about such a despicable character, but that’s what makes him a compelling villain. Writing multifaceted antagonists without making excuses for their behavior or exempting them of responsibility is difficult, and Jessica Jones accomplishes it masterfully.

The plot is a bit of a mixed bag. Jessica Jones feels more like a crime drama than a superhero show, and so the stakes are lower than in other MCU plots. Kilgrave never tries to take over the world or even gentrify Hell’s Kitchen. There’s some nebulous, “We have to stop him from continuing to ruin peoples’ lives” talk towards the end, but for the majority of the season, the plot revolves around one woman who’s facing a life sentence for a crime that Kilgrave forced her to commit. Normally, this would be commendable. I generally prefer small-scale, interpersonal storylines. However, here it seems the writers couldn’t figure out how to stretch this conflict to span thirteen episodes. So, they pumped the show with filler subplots like Jessica’s semi-incestuous twin neighbors and Jeri Hogarth’s deeply uninteresting divorce. And good freaking Lord are episodes 10 and 11 a frustrating slog (never, ever, ever is “military drugs are bad” a better set up for a villain than a carefully constructed backstory). Don’t worry, episodes 12 and 13 end the season on a high note, but … boy, it’s tough for a while.

Yet, the strength of the characters’ writing more than makes up for the plot’s shortcomings. I will take a show about interesting, complex characters driving forward a meh-plot over a tightly written story featuring bland mannequins any day. Jessica’s believable, poignant friendship with Trish Walker alone makes the show a success.

Marvel Studios took a gamble when they decided to base their first superheroine show on such obscure material, and it paid off. Jessica Jones is dark, compelling and brutally honest. After waiting so long for Marvel to produce another female-led property, I am very, very thankful it turned out this well.