That sound you hear is Sam Maggs gleefully shrieking. 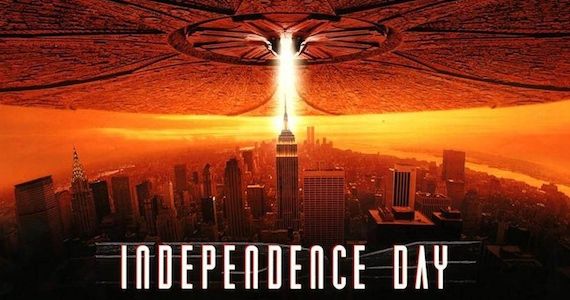 Start placing bets on what Roland Emmerich gonna blow up this time. Personally, my money’s on the Great Wall of China. Has he done that one yet? It’s so hard to keep track.

Goldblum will also be joined in giving viruses to aliens by The Hunger Games‘s Liam Hemsworth and newcomer Jessie Usher as Will Smith’s character’s stepson. Usher, in addition to not being Jaden Smith (thank God), recently starred in the LeBron James-produced Survivor’s Remorse on Starz.

But what will this new film be about? Let’s refresh your memory:

Explained Emmerich to EW.com, the films will take place about 20-25 years (in human time) after ID4—but that’s only a few weeks for the aliens, who received a distress call from their defeated brethren and high-tailed it through a worm hole (thus the time discrepancy) to get to us and wreak some havoc.

In the intervening years, says Emmerich, humans “have harnessed all this alien technology. We don’t know how to duplicate it because it’s organically-grown technology, but we know how to take an antigravity device and put it in a human airplane.” But while humanity has leveled up, so have the aliens, who “also do different things.”

The film is set for a June 24, 2016, almost 20 years after the first one was released on July 3rd, 1996. No word on whether Bill Pullman is on board yet, but Emmerich is on record as saying that Smith will not return because he’s too big a name and too expensive to cast. Aww.

Anyway, last we heard it already had a title, Independence Day Forever (obviously we’re all going to shorten that To ID4ever, right?), but we came up with our own just in case they want to switch gears:

Independence Day 2: We Just Have a BBQ, We Beat the Aliens, Remember?

ID4 2 – The Answer to the Ultimate Question of Life, the Universe, and Everything

Independence Day 2: Literally Who Cares About The Plot Now It Doesn’t Matter Because Goldblum Is In It