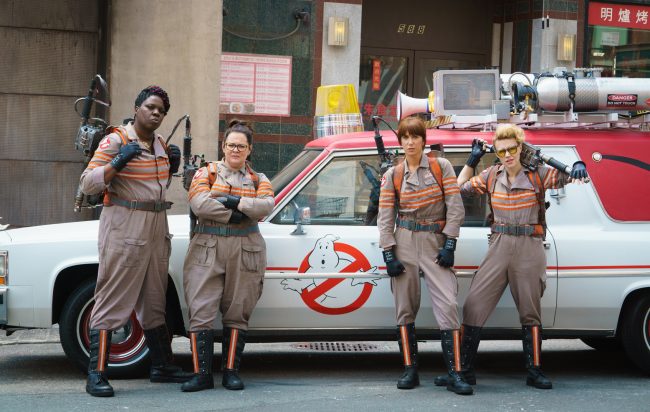 As someone who grew up watching the Ghostbusters movies, I would say very confidently that I am a fan of Egon, Peter, Ray, and Winston. So, to hear that Jason Reitman, who is directing the new film, plans to give it “back to the fans,” I honestly have to laugh. If someone like myself and my older brother (who was the one to show me the original Ghostbusters) can enjoy the Paul Feig version, what right does Jason Reitman have to say that he’s giving the new film back to fans?

I’m sorry, but maybe I’m confused. Does it make me less of a fan that I liked Ghostbusters: Answer the Call? Or am I less of a fan because I’m a woman? Which one is it there, Jason Reitman? As Pajiba reports, Reitman is supposedly letting the “original” fans have their time again, meaning they cried enough on Twitter about the female Ghostbusters that now the crybabies will have their male-centric comedy right back where it started!

On an episode of Bill Burr’s Monday Morning Podcast, Reitman said, “We are, in every way, trying to go back to the original technique and hand the movie back to the fans.” In case you had any doubts as to what he means by that, he also said, “I’m not making the Juno of Ghostbusters movies.”

Another important question I have is what this means for Bill Murray and Ernie Hudson, two men who put their stamp of approval on Ghostbusters: Answer the Call. Remember when they were in the film? Because it gave fans an ode to the original and was creative and funny?

Look, I remember that time in geekdom. My young pseudo-niece was terrified of ghosts, so to help calm her down, my brother showed her the original film. She loved it, and he looked at her and told her that girls can be Ghostbusters, too. That was the important message of that film—not that we were trying to “ruin” a childhood classic, rather that we just wanted to see ourselves as the Ghostbusters too.

So, dear Mr. Reitman, I know your father directed the original film. I get it; you have a claim to it, but we do, too. We have a claim to how these movies make us feel, and some of us enjoyed Answer the Call. So validating the most toxic, misogynist opposition to that film as the true fandom is a slap in the face to all of us who felt empowered by the female Ghostbusters.

Was your intention to alienate part of your fanbase? I don’t know, but it’s what you did. Recognizing that there is a whole generation of women who look up to Erin, Jillian, Abby, and Patty just as we did Peter, Ray, Egon, and Winston is important. So give the series “back to the fans” of both the reboot and the original franchise, or just let the Ghostbusters live as we know them.

I’m tired of this discourse, and I just want to watch all the Ghostbusters movies in peace!