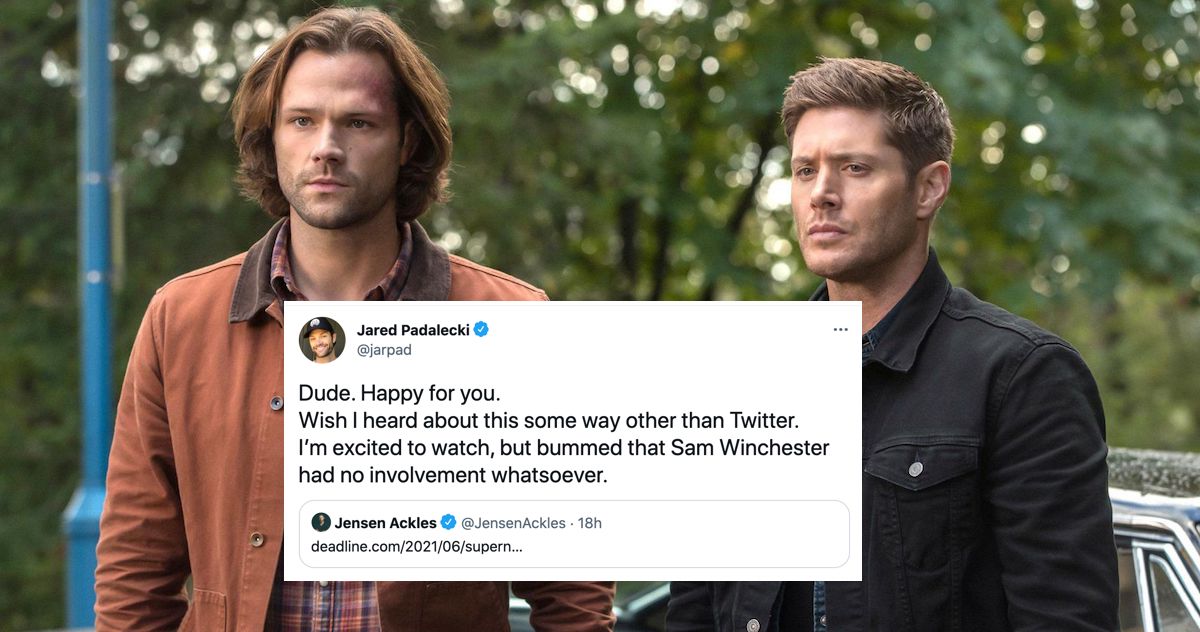 There’s trouble in Winchester heaven. Twitter exploded last night after actor Jared Padalecki retweeted the news of his onscreen brother Jensen Ackles’ new CW Supernatural prequel—with the commentary that this was the first he was hearing about it. Now Padalecki’s Tweets have prompted wall-to-wall media coverage and much speculation, not to mention some schadenfreude and many memes from people watching on the social media sidelines.

Per Deadline, Jensen and wife Danneel Ackles will executive produce a Supernatural prequel series about John and Mary Winchester, Dean and Sam’s parents, with Ackles returning to narrate the show as Dean. The show will be titled, wait for it, The Winchesters. Nowhere present, however, is Sam Winchester—and Padalecki, who portrayed that character for 15 seasons, apparently had no idea this project was even happening.

Dude. Happy for you.
Wish I heard about this some way other than Twitter.
I’m excited to watch, but bummed that Sam Winchester had no involvement whatsoever. https://t.co/bAcEvFKM7p

It’s rare to see such inside baseball made public, but this was also the kind of thing Twitter was built for. Let’s unpack what’s going on, because it’s a lot. First of all, we have no idea what the reality of the Ackles/Padalecki relationship is like, though they’ve made a lot of noise for years about being “brothers” IRL as well as onscreen. That’s a big reason why this hit many fans and nonfans alike as an astonishing development.

While Ackles is under no requirements to include Padalecki in a deal of his own making, you’d think that at least a heads-up text might be in order before he tweeted the news himself. So keeping Padalecki in the dark seemed like a PR nightmare waiting to happen, unless that was the intent behind this roll-out (a lot of free publicity!), or unless Padalecki’s knowledge of the project would have been so troublesome that it was necessary to cut him out of it entirely.

Second of all, however, Padalecki’s very public Twitter response is strange form for someone who is currently executive producing his own TV show for the same network, Walker. One would also think that Padalecki’s first instinct would be to, well, send Ackles a text or call him, not blast out the response he did to his 2.9 million followers.

In a now-deleted Tweet, Padalecki also called out Robbie Thompson, a Supernatural writer and producer who is set to write Ackles’ prequel series. The tone of the tweet to Thompson should quash any theories that all of this was some sort of planned publicity stunt from the once and former brothers.

“Et tu, brute?” Padalecki wrote in the deleted Tweet, tagging Thompson and underlying just how betrayed and backstabbed he was feeling when he saw the news. “Wow. What a truly awful thing you’ve done. #Bravo you coward.”

With reactions like these, it’s suddenly not as surprising that Ackles and his team left Padalecki out of this project. The animosity on display also suggests that there’s a more longstanding tension here.

Since the news made headlines and generated endless Tweets, Padalecki has struck a more conciliatory note, thanking fans “for the love” and asking them not to send hate to the others involved.

Hey world.
Thank you for the love.
Please PLEASE don’t send any hate or threats.
I care deeply about everybody involved and would be in true misery if any of them were harmed or threatened.

This is nice, I guess, but it also came a full fifteen hours after his initial Tweets. Padalecki is well aware that Supernatural still maintains a massive fanbase that is extremely online. What did he think was going to happen here?

Meanwhile, those who are not invested in the show, the prequel, or the stars’ fall-out are still intrigued by the drama that has been unfolding. The series has been such a staple for so long that it’s hard not to feel drawn in by the chaos of it all.

It’s worth mentioning that many Supernatural fans aren’t thrilled with the prequel idea, Ackles/Padalecki notwithstanding. John Winchester is not a terribly popular character, with fans debating for over a decade just how awful of a father he was to his kids.

Screenrant has an article called “10 Times John Winchester Was the Worst Father on TV,”  while “John Winchester’s A+ Parenting” is a sarcastic tag that’s been around on social media for years. There are entire John Winchester hate blogs on Tumblr.

jensen is so close to the character of dean that he still somehow believes john winchester is a compelling and sympathetic character. this is character bleed at its most disappointing

Thinking about #Supernatural‘s prequel #TheWinchesters and how you know Mary is going to be sidelined to show John’s journey to becoming a hunter when the former has the family legacy of being hunters that span generations and should be the focus of the show… pic.twitter.com/IUaMfHKpJE

Needless to say, fans are questioning why of all potential Supernatural spin-off stories John Winchester should be highlighted, especially after other attempts to spin-off the show, including the female-led Wayward Sisters, were not picked up by the CW to series. Many fans of the show were also disappointed by the lackluster finale (where Dean dies and Sam ages badly) and its failure to include Misha Collins’ angel Castiel or further address his relationship with Ackles’ Dean. And some are merely exhausted by the idea of any more Supernatural. So quite a few of the people online who are raising their eyebrows at the current drama and sipping tea are formerly invested fans.

the supernatural prequel im so sorry jensen but i cannot take anymore of it pic.twitter.com/LJ5fki4PeI

jensen i say this with peace and love but i just do not care about mary and john pic.twitter.com/CJcBJOkEmQ

In the time since I began writing this article, Padalecki has provided a further update, suggesting that after a talk with Ackles he’s satisfied the show is in its early stages and … he might eventually be involved after all. Maybe he should have had that phone call first?

@JensenAckles and I had a great talk, as we do often, and things are good.
The show is early in the process with miles to go.
We’ve travelled a lot of roads together, and sometimes those damn roads have bumps.
Bumps don’t stop us.
Once brothers, always brothers. #spnfamily

At least we’re getting some truly amazing memes and reactions from this. Welcome to the Internet, folks.

none of you follow me because you want spn updates but I am truly living rn, this is the future chuck wanted, happy s16 finale pic.twitter.com/oh4UtYunM9

No dog in this fight, but “I forgot how much face time we always used to get”? There is no way these two ever spoke off-set except for the cons. pic.twitter.com/ccWNFuOKlz

do rich people not have group chats

as someone who has never watched an episode of supernatural and knows nothing about their relationship as costars i currently am doubled over with tears in my eyes https://t.co/QCRVFQ8ckB

live footage of jared’s reaction to finding out about the supernatural prequel on twitter dot edupic.twitter.com/ppKm4vsZVL

#BREAKING: Supernatural star Jared Padalecki ARRESTED after punching co-star Jensen Ackles in the face amid news of Supernatural prequel he wasn’t made aware of pic.twitter.com/esgcFfybae

castiel will not be watching the new supernatural prequel.

me to supernatural cast pic.twitter.com/DCHl1jV7as