Japanese Trailer for Brave Shows a Ton of New Footage 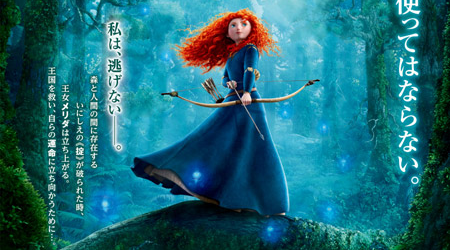 A lavishly designed and animated fantasy-action family film featuring a combat-ready female protagonist is something of a rarity in American animation, but decidedly not in anime. After all, Hayao Miyazaki‘s Studio Ghibli has been producing fantasy heroines for years, from Nausicaä to Kiki, Princess Mononoke to Spirited Away, Howl’s Moving Castle to The Secret World of Arrietty. So it should come as no surprise that the Japanese trailer for Brave is pretty much like somebody went into the future and the only thing they could bring back was a fanmade trailer for Brave that recut the movie as if Miyazaki himself was in charge.

Also the movie is called Merida and the Frightening Forest.

Or at least it is according to fan-translated subtitles. I, for one, am going to be taking the plot details revealed here with a few grains of salt: it’s a trailer, after all, that’s recut the film to be appealing to a cultural demographic outside it’s intended release audience and translated it into another language, and on top of that it’s been translated back into English. Doubtless some of the stuff in it is absolutely true, but it wouldn’t surprise me if this trailer over or under-emphasizes the importance of some of the plot elements that it describes.

But that doesn’t make the clips of new footage any less new.