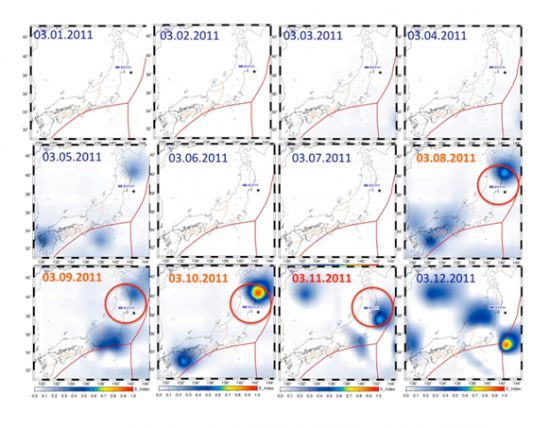 According to the preliminary results of a study undertaken by American and Russian scientists, the atmosphere directly above the fault zone from which Japan’s devastating 9.0 magnitude earthquake emanated in March heated up substantially in the days leading up to the quake, and saw a “rapid increase of emitted infrared radiation” on March 8, three days before the earthquake struck.

These kinds of observations are consistent with an idea called the Lithosphere-Atmosphere-Ionosphere Coupling mechanism. The thinking is that in the days before an earthquake, the great stresses in a fault as it is about to give cause the releases large amounts of radon.

The radioactivity from this gas ionises the air on a large scale and this has a number of knock on effects. Since water molecules are attracted to ions in the air, ionisation triggers the large scale condensation of water. But the process of condensation also releases heat and it is this that causes infrared emissions.

Even if the research team’s preliminary numbers holds up, a big question remains: Will similar data be useful in predicting future earthquakes before they happen, potentially minimizing the loss of human life? The difficulty here is the risk of false positives: There are obvious costs associated with sounding the earthquake alarms and causing people to evacuate an area only to find that there is no quake at all. On this, the answer remains murky: While no major earthquake has ever been successfully predicted using ionospheric activity, at least one proponent of the Lithosphere-Atmosphere-Ionosphere Coupling model, Professor Sergey Pulinets, believes that such prediction is theoretically possible, and could eventually be practical.