“PYNK” is a glorious, pink-hued celebration of female sexuality and empowerment. And while the video is laden with vaginal imagery, Janelle Monáe and Tessa Thompson went out of their way to acknowledge that there are women without that anatomy.

The Janelle Monáe song, featuring Grimes and guest starring Thor: Ragnarok‘s Tessa Thompson, look the Internet by storm when it was released on April 10th. The sexy and stylish video has already been viewed more than 3 million times; I started seeing gifsets of it pop up mere moments after the video appeared. The “vagina pants” worn by Monáe and her dancers became instantly iconic, and there’s now a host of articles as to how they were made.

We’re not used to seeing female anatomy and desire celebrated in such bold terms and colors, and “PYNK” is a refreshing departure from that unfortunate norm. Past body parts, the video also provides commentary on sexuality. As Vanity Fair observes:

Emma Westenberg directed the video, and it has a lot going on, but the pants show up early and steal the show promptly, thanks in part to Tessa Thompson, who co-stars (as she did for Monáe’s other recent videos). Her head appears squarely in Monáe’s vagina pants, which is not subtle, nor is the part where the two make sultry faces at each other across a sea of undulating butts. The messaging is very clear and very queer.

The themes at play in “PYNK” were immediately the topic of conversation on social media, with people buzzing about Monáe and Thompson and, gloriously, about vaginas.

But Monáe and Thompson were both thoughtfully careful in their language around “PYNK” to point out that not all women have that anatomy. On Tumblr, user bluearrow126 compiled and highlighted the instances they found: 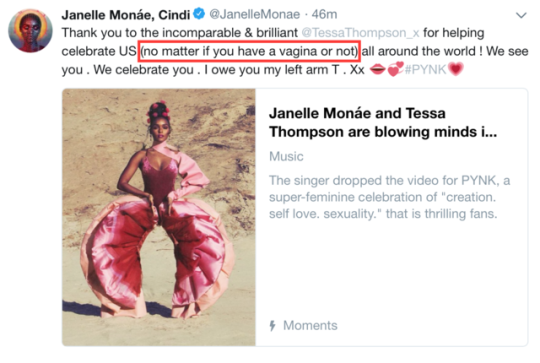 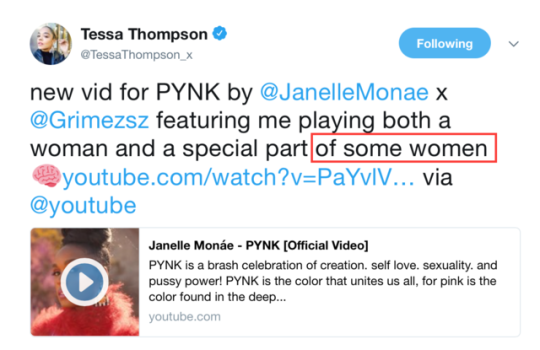 Thompson is an old hand at being sensitive about the topic—for which her fans are grateful.

The Tumblr post further emphasizes that it’s not just the language used on social media that gets this point across. “Hints of that in the music video,” they point out. 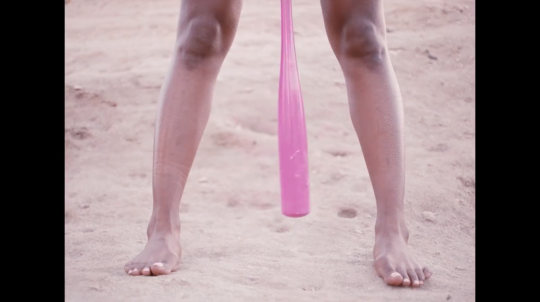 And it’s telling that in the now-iconic vagina pants dance scenes, while Monáe and four of her dancers wear the pants, two of her dancers do not. This seems to be a visual acknowledgement and purposeful inclusion of women who do not have vaginas. 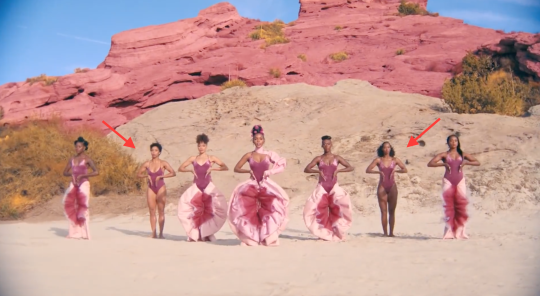 Just when we thought we couldn’t love this video more, it ups the ante.