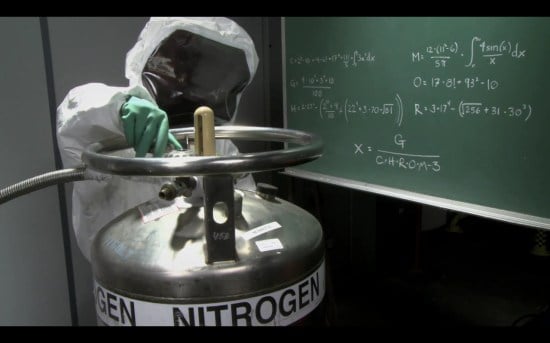 This Thursday, Google released a video detailing some of the features of its new Chrome OS, and about two minutes and twenty seconds into it there is a shot, literally two seconds long, with a blackboard in the background.

The blackboard has an equation on it. You should know what this means. Well, actually you shouldn’t.  But some smart people should.  And they did.

The geeks behind Jamendo, a community site for musicians wishing to share their work through creative commons licenses, were the first to lay claim to a shiny Cr-48 Chrome Netbook.

They began by running the equations through Wolfram Alpha.  “Any nerd could have done that!” you say.

The first path we explored was in Physics, 1.66*10^-27 being the atomic mass constant u. Having X=2.83u didn’t make much sense: too far from 2.0x or 3.0x where the closest elements I knew are. Then my friend Joachim Rambeau tipped me off with an idea on “Chrome UX” being the name of the team that released the video. There was an X in there! With the equation X=(U/Chrome), U being the mass of Uranium (~238u depending on isotopes) and “Chrome” the mass of Cr-48 or related isotopes, we found ourselves very close to the 4.7 ballpark. I posted this as a comment in the video, without much hope of it being the definite answer…

Eventually, through some ciphering, they got a full URL, goo.gl/speedanddestroy, that led them to this page (in screenshot, because it no longer displays a notification of success): 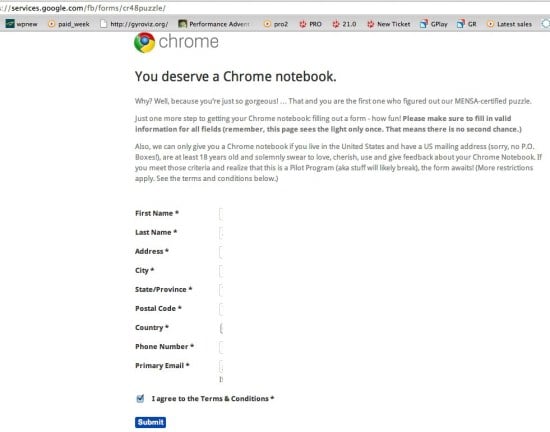 Congratulations on your mighty accomplishment, Jamendo!

Man, freakin’ math, how does it work?