The lady has Mikes to Magic. 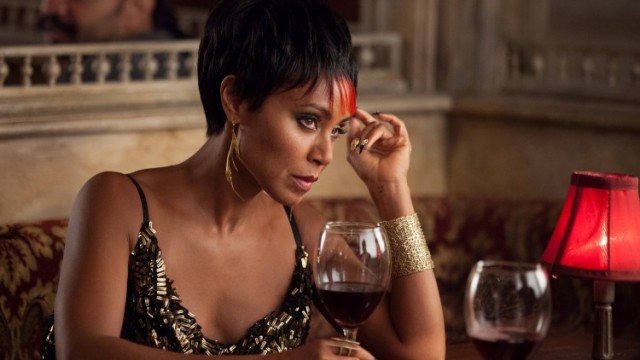 Hopefully she’ll leave the way she came: walking a shirtless man on a leash.

After a truly bonkers run as Gotham‘s Fish Mooney, Jada Pinkett Smith announced during this morning’s Live With Kelly and Michael that she won’t be returning for the show’s second season: “I don’t think so, no. I signed for a year and the year is up.”

How do you feel about Pinkett Smith’s imminent departure (and by extension, Mooney’s possible death in an upcoming episode)? Considering Mooney was the only Gotham character that didn’t originate in the comics, I guess eliminating some of her drama with Falcone might free the writers up to explore the arcs of Baby Batman and his friends a little more organically (although “organic” and “subtle” are not words I’ve ever associated with Gotham).

Personally, I’ve always felt like the show was a bit of a hot mess, and without Pinkett Smith driving the train it stands to become a lot less hot and a lot more boring and male-dominated (although I’d rather see Pinkett Smith leave the series than Mooney be put through increasingly degrading story arcs). Thoughts?