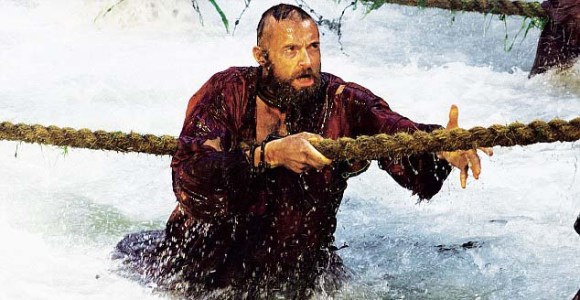 We’ve been following this news for about a month now. Warner Bros. is planning a Batman Begins-style origin film for Peter Pan (called Pan) while a few other Lost Boy projects swirl around Hollywood. This particular project is being written by Jason Fuchs, produced by Greg Berlanti (Arrow) and directed by Joe Wright (Atonement, Hanna).

Then we found out Captain Hook wasn’t going to be the Big Bad in this particular film and that Warner Bros. wanted Javier Bardem to play the pirate Blackbeard instead. Whether that was completely a rumor or they’ve just changed their minds isn’t known but now they’re looking at Hugh Jackman.

The Hollywood Reporter says the X-Men star is in negotiations to take on the role and describes where this new version of the story will lead us. “The script by Jason Fuchs sees Pan and the man who becomes Hook as friends, with Hook a member of the crew on Blackbeard’s pirate ship,” they write, “Blackbeard is the villain of the piece, with the friends teaming up to take him down. However, a rift between the two soon develops, and diverging paths are taken.”

Who do you think would make a better Blackbeard – Bardem or Jackman?