You love to see it. 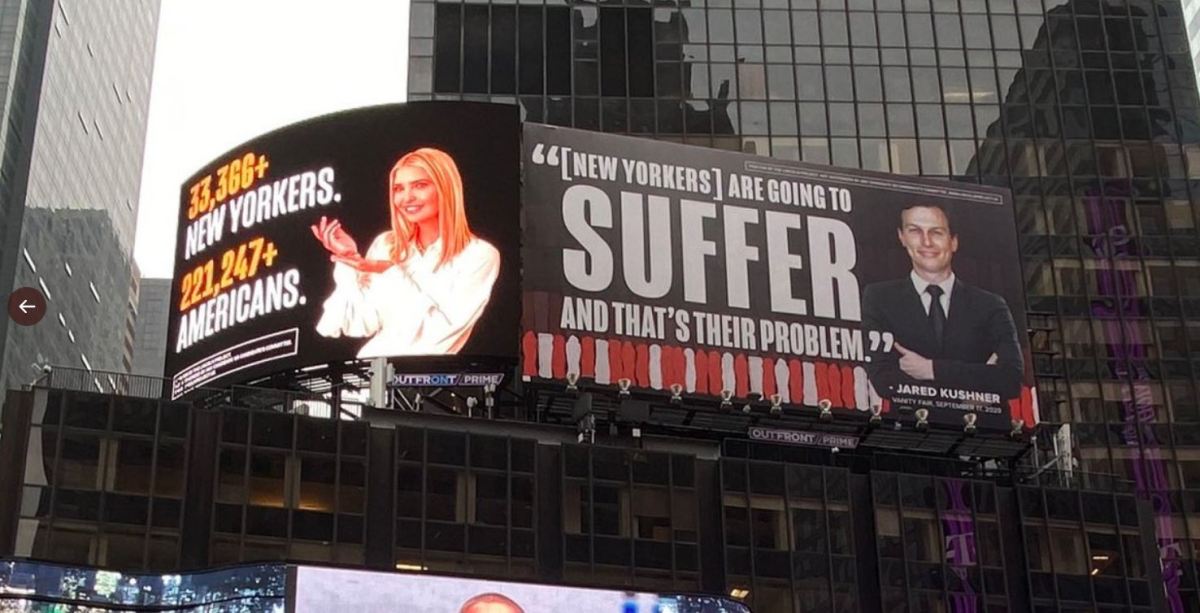 Ivanka Trump and her husband Jared Kushner are threatening to sue the Lincoln Project over a pair of billboards in Times Square which went up this week. One billboard features Ivanka, gesturing like Vanna White, at the New York and national death toll from COVID-19. The second features Jared Kushner’s qoute “[New Yorkers] are going to suffer, and that’s their problem”, as Kushner grins over a line of body bags.

The quote was taken from a Vanity Fair exposé about Kushner and the White House’s failure to respond to the pandemic and their refusal to help blue states obtain adequate PPE:

“The same attendee explained that although he believed in open markets, he feared that the system was breaking. As evidence, he pointed to a CNN report about New York governor Andrew Cuomo and his desperate call for supplies.

According to another attendee, Kushner then began to rail against the governor: “Cuomo didn’t pound the phones hard enough to get PPE for his state…. His people are going to suffer and that’s their problem.”

The Lincoln Project, a group of anti-Trump republicans headed up by George Conway, has delivered some of the best anti-Trump ads of the presidential campaign. They have also bought billboards across the country encouraging republicans to support the Biden Harris campaign, and calling out Trump for his myriad failures and abuses of office.

Marc E. Kasowitz, a lawyer for Ivanka and Jared, sent the Lincoln Project a letter threatening a lawsuit. Kasowitz wrote, “Of course, Mr. Kushner never made any such statement. Ms. Trump never made any such gesture, and the Lincoln Project’s representation that they did are an outrageous and shameful libel. If these billboards are not immediately removed, we will sue you for what will doubtless be enormous compensatory and punitive damages.”

The Lincoln Project responded with a letter of their own in a tweet which read, “Jared and Ivanka have always been entitled, out-of-touch bullies who have never given the slightest indication they have any regard for the American people. We plan on showing them the same level of respect.”

Jared and Ivanka have always been entitled, out-of-touch bullies who have never given the slightest indication they have any regard for the American people.

We plan on showing them the same level of respect.

They added, “The billboards will stay up. We consider it important that in Times Square, the crossroads of the world, people are continuously reminded of the cruelty, audacity, and staggering lack of empathy the Trumps and the Kushners have displayed towards the American people.”

Ivanka threatened to sue The Lincoln Project over this billboard so please don’t share it. #MyVoteIsEssential pic.twitter.com/Otk2Hm9nfb

Ivanka and Jared’s lawsuit will only continue to publicize and promote their horrific behavior. Let’s hope that this public shaming continues long after they leave the White House.