The Force Awakens – “Isolation of Rey” from Kasper Møller Jensen on Vimeo.

Kasper Møller Jensen put together a pretty intriguing video examining the visual elements and framing techniques used to hammer home just how isolated Rey was throughout the events of The Force Awakens. It’s no secret that The Force Awakens was a movie that utilized a lot of clever film techniques to subtly convey what was happening on screen on a much more subconscious level. Things like the blue and red lighting shifting and changing behind Kylo Ren as he stood off against his father on the bridge or the sound design drove the interrogation scene all provided texture and depth to these parts of the movie that would have otherwise fallen quite flat.

Here, Jensen dissects the screen, splitting it into halves and thirds, showing how the shot composition isolates Rey from everything else that’s happening around her. Shots of her on Jakku are pretty obvious when you think of it in the context of the plot–she’s a scavenger, she lives alone, it’s a desert planet. But if you were to take these shots out of context and just lay them out like a photo or a picture, you see that there’s a lot more thought placed into each of them. Each of these shots tell a story all by themselves. That’s how cinematography is supposed to work.

Take, for example, the first dissected shot that Jensen examines. Rey’s finishing her meal, and she’s sitting by the foot of the AT-AT. You can see that the shot can be cleaved into two distinct halves: the vast, open desert on the left, and Rey with the AT-AT foot, pilot helmet, and other items on the right. From watching the movie, we understand that she’s a lone scavenger, but looking at the shot all by itself, we can see that Rey is quite obviously all on her own in the middle of nowhere. 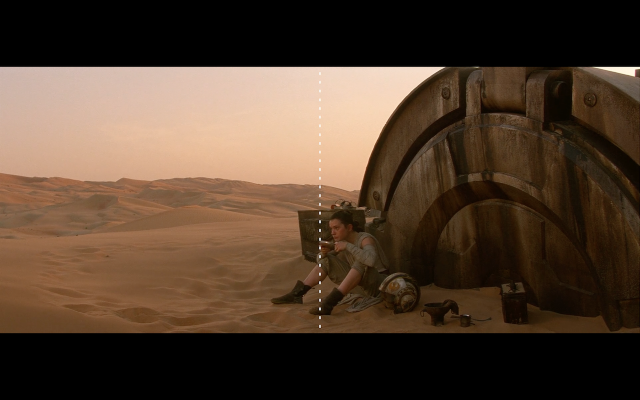 Going further, many of the shots on Jakku introducing Rey make her incredibly small, visually speaking. More than just showing off Jakku’s immense landscape, these shots really drive home the point that, again, Rey is on her own. Stretching further, it’s reflective of what her state of mind must be at that point in time: she’s just a scavenger, she’s just alone, she’s just a small nobody crawling around in the literal carcasses of the past looking for value in order to justify staying on that planet–to justify staying alive, really.

Where the video gets interesting is in its examination of Rey in relation to other people, places, and things. In a lot of ways, both good and bad, Rey stands alone. Her growth as a character who is able to lean on friends when she needs and yet remembers she can stand on her own is well illustrated by both the interactions and dialogue delivered through the plot as well as the thought and imagination that go into each of these shots. Though there are points in this video where it’s a bit unclear what Jensen might be getting at, it still shows how well The Force Awakens was crafted.