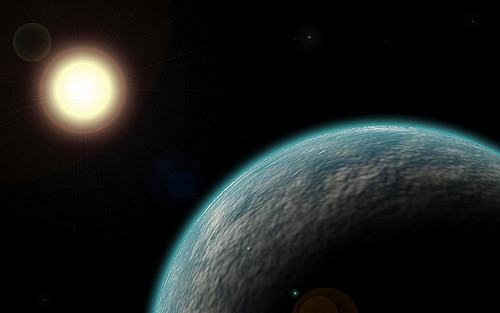 As we cruise on into the future (read: look for ways to get off this hecking planet, or maybe help), the methods we utilize to find life on other planets will continue to change. After the discovery of and subsequent research into “new planet” Proxima b (which orbits the next closest star to Earth’s own sun), scientists believe that the conditions on Proxima b may be sufficient enough to house extraterrestrial life. They can’t confirm the existence of such conditions, though, until well into 2030, when telescope technology can catch up to confirm these hypotheses.

Enter: University of Colorado Hubble fellow Matteo Brogi, who describes a method that may cut that wait time by ten years, allowing us to find out more about Proxima b by 2020. According to Space.com, Brogi’s method combines two already common techniques used to examine stars and exoplanets: “direct imaging” and high-resolution spectroscopy. The former is a technique that astronomers use to locate a planet and the star it orbits. By “dimming” the light of the star, the planet comes into focus—it’s easier to see thanks to reduced glare, basically.

Then, once a planet is located, Brogi and his colleagues propose using the Doppler method to further separate the planet’s light from the star’s light, enough so that high-resolution spectroscopy can help earthbound scientists determine what a planet is composed of without the interference of the light coming from the star, which would otherwise render high-resolution spectroscopy specifically targeting the planet useless.

The combined techniques are still going through fine-tuning and shaping, and of course, this being science, require much more testing and refinement. But if they can zero in on getting the technique just right, it could save us a solid amount of time in the search for life on other planets.

You should definitely check out Space.com’s full writeup of the development of the technique. It’s pretty intriguing, and should make for a solid outer space distraction from our earthly problems.