Iron Fist Gave Toxic Masculinity a Seat at the Table

What will The Defenders do about it? 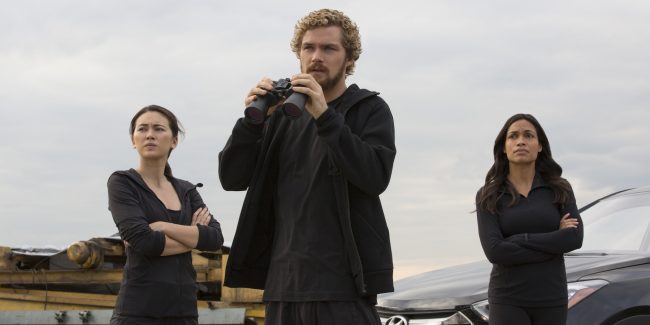 A note on the phrase “A Seat at the Table:” The phrase “a seat at the table” was most recently re-introduced into the popular lexicon by Solange Knowles’ seminal work of the same title. That work was in part a conversation about who gets a seat at the table, when, and why, and that conversation is being carried largely by the ongoing work of Black women. The use of it here is not intended to co-opt the phrase, but to expand the conversation into other ongoing ones being held at present regarding popular culture and representation, with great respect to where that conversation originated and where it continues to be held.

Iron Fist is a mess. The most compelling characters are a villainous family of white multi-billionaires who can kill each other and return from the dead. The whitewashing of the martial arts saga is an enormous problem that the show only exacerbates narratively. But the minute-by-minute issue of sexism and the toxic masculinity of Danny Rand’s main character make the show an unnecessary and relentless slog–one specifically designed to appease a stereotypical comic audience while alienating the more “diverse” audiences that Marvel itself has recently disparaged.

Danny Rand suffers from Toxic White Fragile Masculinity and an explicit White Man’s Burden syndrome, and the combination renders the character painfully unlikeable. It didn’t have to be this way. In addition to making the main character Asian, as many fans called for–which would have addressed some of the cultural appropriation issues, although not all–the writers could simply have given the audience a character to root for with an ounce of self-awareness or an iota of charm. By mid-way through the season, it becomes clear that the writers wanted to give the audience a character they would see themselves reflected in–and that they don’t hold their imaginary audience in particularly high regard.

When Danny first meets Colleen Wing, destined to be his love interest, he’s barefoot in a park asking for her attention, and her reaction is both completely understandable and plain smart: she won’t give him the time of day. Strange men who want to talk to women in parks sometimes follow those women home and later sometimes hurt them; ask Jessica Jones. Any woman with good sense would be polite but distant, and Colleen Wing has good sense. And then Danny follows her to her dojo anyway, and when she suggests he leave and go “down the street” to buy a pair of shoes, he just tells her, “I’m okay.” And then Danny stands there and tells her, a woman who owns a dojo, how she could run her business better, all while still not wearing any shoes, and within a few episodes, we’re meant to believe that this has sparked a love within her that just will not be ignored.

At no point does Danny behave in a way that would earn him anything but rejection from any woman with a sense of self-respect. When she says, “Don’t be here in the morning,” she inevitably wakes up to find that not only is he still there, he’s taken over her entire dojo for his personal use. When she asks him to leave–again–he tells her she isn’t a good enough fighter to protect herself. When he stays, Colleen sets one rule: “Leave the students at my dojo alone.” Danny breaks the one rule and then some, not only interacting with her students against her express wishes, but being flat out rude to them, and actively picking a fight. (Shockingly, the sight of an angry white dude yelling at a bunch of students of color in a dojo does nothing to make the character more appealing.)

The writers continually dictate to the audience that Danny Rand is an acceptable character, rather than creating an acceptable character and telling a story about him. Instead of Colleen kicking Danny’s ass when he won’t listen to her, he constantly gets the better of her. Instead of anyone sitting the kid down and telling him that his outsized sense of entitlement and self-importance are off-putting, characters constantly reassure one another that even if they may not like it, “Danny’s right.” In a much-touted scene, Danny speaks to Colleen in Mandarin immediately upon meeting her; she replies in Mandarin, but tells him she prefers to speak in Japanese or English. With that reply, the writers reinforce the idea that its fine for white boys to assume that every Asian person they meet will speak the one Asian dialect they happen to know; if Colleen had replied with, “I don’t speak Chinese,” they could have undermined those assumptions and demonstrated that jumping on stereotypes can cause embarrassment. But this show isn’t about white boys being embarrassed; it’s about why they should never have to be.

It would have been simpler to make Danny Rand’s character tolerable, perhaps by making him respectful of the people around him, and his constant use of their time, energy, and resources. But then Danny wouldn’t be a reflection of what the writers seem to believe is the “average” fan: young white men who feel misunderstood and want to punch things and then have pretty girls comfort them because they’re special and being special is very hard and no one understands.

To create the Danny Rand they want, Iron Fist gives Colleen Wing a dual-personality complex. On the one hand, she’s genuinely tough, tender, and level-headed; on the other, she’s a tittering teenager who likes a boy. In her guise as an actual, well-rounded character, she is polite but firm with an unwashed, shoeless white guy who tries to talk with her in a park. In her guise as Manic Pixie Ninja Girl, she’s eager to get drunk and sleep with a guy she knows is a virgin who says things like, “It drains my chi.” In the end, the show reconciles the two disparate Colleens by making her a victim of a brain-washing cult. That this is the only remotely plausible excuse for her behavior is a serious problem.

The issue with Convenient Colleen is that like all Manic Pixie girls, she’s an imaginary device that still has real consequences for real women. Danny Rand is every lonely white boy’s wish fulfillment fantasy, but it comes at the direct cost of real women’s security. “You’re just misunderstood. They’ll see that you’re special,” Danny Rand says to lonely white boys, who become enraged when they discover that in real life, their ability to fool around with nunchucks is not impressive to a woman who owns her own nunchucks. “You bought dinner, so she’ll definitely eat with you and listen to what you have to say,” Danny Rand says to lonely white boys, who become enraged when young women tell them firmly that they don’t want that dinner at all and don’t care how they feel about it. “Even though you’re a 25 year old virgin and you feel self-conscious about it, a beautiful Japanese woman who is tough and cool is going to want to sleep with you, and she’ll definitely think you’re good at sex,” Danny Rand says to lonely white boys.

Every woman suffering through these scenes knows it’s a lie – and every boy watching can’t see a single reason why it shouldn’t be as true for him as it is for his new hero Danny Rand. This is a particularly shameful burden to put on an Asian female character, exacerbating an issue of Asian fetishization among white men that is well-documented and snakes throughout the history of comics and comic fandom (that Colleen is specifically Japanese rather than generically “Asian” is a distinction only hinted at, and only twice; The Hand is not only generically “Asian,” but is staffed by non-Asian minorities throughout the series).

It’s through Claire Temple, played with a dry, sparkling wit and a refreshingly grounded realism by Rosario Dawson, that the show finally voices any sort of reason in regards to Danny’s character. From the start, it’s clear that Claire can’t see why Colleen would give him the time of day; by the end, she’s made it clear that Danny can’t be “special” enough to continue to behave like a child and get away with it. Colleen Wing can only tolerate Danny because the character is molded by the writers into something vastly convenient; Claire barely tolerates him at all. It’s impossible to imagine Jessica Jones not despising him.

Will the writers of The Defenders give Jessica Jones the Colleen Wing treatment, undermining the series only powered superheroine–and a character that speaks directly to trauma and survival–in the interest of promoting Danny Rand’s unearned but oft-declared “special” status? Or will she, Claire, and Luke Cage help shift the character into a more realistic one: tolerated for his abilities, but generally unlikeable for his outsized sense of entitlement and privilege? Iron Fist goes to great lengths to deliberately reinforce the very same normative masculinity and masculine assumptions, particularly regarding possession over women’s bodies and their time and resources, that Jessica Jones actively combats. Many of Danny Rand’s personality traits are Jessica Jones’ literal evil nemesis.

Iron Fist gave toxic masculinity a seat at The Defenders’ table. Are they going to expect Jessica Jones – and the rest of us – to choke it down?

Kaitlyn Soligan is a writer and editor from Boston living in Louisville, KY. She writes about that at www.ivehadworseideas.com and rants about politics and pop culture on Twitter. She likes you, and she thinks you’re doing a really good job.