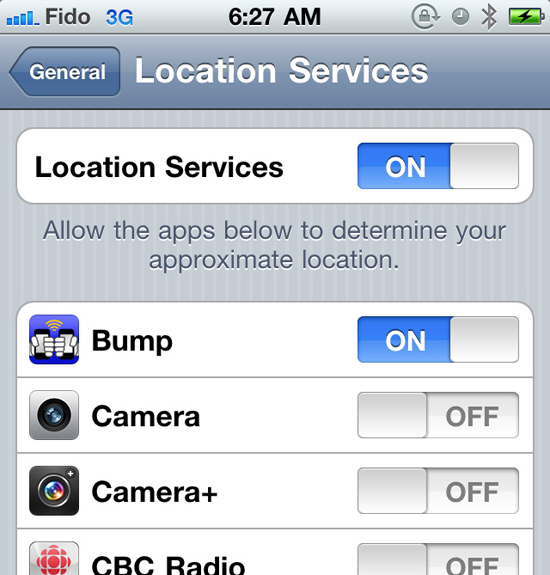 On the heels of the furor over the iPhone’s unsecured location log, the Wall Street Journal is reporting that the iPhone continues to store location data in the consolidated.db file even when location services are disabled on the phone. This is in direct opposition with previous statements from Apple, unrelated to this recent revelation, which claimed that users could opt out of all location gathering operations.

In their follow-up research to last week’s revelation about the consolidated.db location information, the WSJ found that deactivating location services from the iOS settings panel did not stop data from being logged. From their report:

The Journal disabled location services (which are on by default) and immediately recorded the data that had initially been gathered by the phone. The Journal then carried the phone to new locations and observed the data. Over the span of several hours as the phone was moved, it continued to collect location data from new places.

The WSJ says that these findings have been confirmed by independent researcher Ashkan Soltani and various online postings. Their report also bolsters the original claim made by the U.K. researchers which publicized the location log to the effect that the devices are using call-tower triangulation and not GPS to determine position, meaning only an approximate location is logged. The U.K. researchers also asserted that the location log was not being transmitted off the user’s computer or mobile device. This, coupled with the WSJ’s tests, seem to indicate that the location log is completely separate from the location data that is transmitted to Apple which users can control.

This story has a bit of a twist, however, as an email allegedly from Steve Jobs has surfaced on the location tracking issue.

Though the validity of the email cannot be verified, Jobs has been known to glibly respond to user emails. From MacRumors:

Could you please explain the necessity of the passive location-tracking tool embedded in my iPhone? It’s kind of unnerving knowing that my exact location is being recorded at all times. Maybe you could shed some light on this for me before I switch to a Droid. They don’t track me.

A: Oh yes they do. We don’t track anyone. The info circulating around is false.

Sent from my iPhone

If legitimate, this lends credence to the belief that Apple is not itself doing anything with the location data. It may even support the rumor that the consolidated.db is actually a case of flawed coding, and is simply failing to delete old location information. The Next Web notes in their coverage that Google’s Android devices do store location and transmit location information, but far less than the data being stored on iOS devices.

Without a direct comment from Apple about the consolidated.db issue — and Apple hates giving direct comment about anything bad unless it’s absolutely pushed to the brink — all of this is little more than speculation. This discovery that users can do nothing to stop the storing of information will only add to the mounting privacy concerns. Hopefully, Apple will come forward with an explanation or, better yet, a fix.