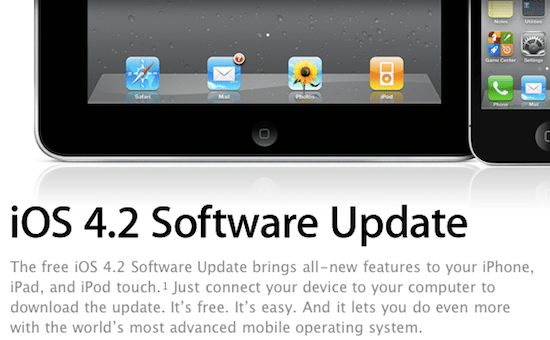 iOS 4.2, the long-awaited mobile operating system upgrade from Apple, has been the subject of crazy amounts of speculation this past month — Apple had merely announced that iOS 4.2 would be available for download sometime in November, but that didn’t stop iPad and iPhone users from breathlessly counting down and speculating as to why it had been delayed from dates that weren’t official.

The important thing is, iOS 4.2 is here, Update, 1:00pm EST: iOS 4.2 is now ready for download. Just connect your iPhone, iPad, or iPod Touch to your computer, load iTunes if it doesn’t load automatically, and follow the instructions provided.

Apple has, however, put up a new iOS page heralding the features of 4.2, as well as a press release, reproduced below.

The big new features: Multitasking for the iPad (finally!), AirPlay, which allows Apple TV owners to wirelessly stream music and videos from their portable iDevices, and AirPrint, the driver-free wireless printing feature. Apple has also made Find My iPhone, which used to require a MobileMe subscription (and which works for the iPod Touch and iPad as well), free to all.

CUPERTINO, California—November 22, 2010—Apple® today announced that iOS 4.2, the latest version of the world’s most advanced mobile operating system, is available today for download for iPad™, iPhone® and iPod touch®. iOS 4.2 brings over 100 new features from iOS 4.0, 4.1 and 4.2 to iPad including Multitasking, Folders, Unified Inbox, Game Center, AirPlay® and AirPrint.

“iOS 4.2 makes the iPad a completely new product, just in time for the holiday season,” said Steve Jobs, Apple’s CEO. “Once again, the iPad with iOS 4.2 will define the target that other tablets will aspire to, but very few, if any, will ever be able to hit.”

Game Center allows iPad, iPhone and iPod touch users to challenge and play friends or be matched automatically with new opponents, showcase their scores and achievements, and discover new games their friends are playing.

AirPlay is a new feature for streaming music, video and photos wirelessly from iPad, iPhone and iPod touch to Apple TV®, transforming Apple TV into a great accessory for iPad, iPhone and iPod touch. iOS users also will be able to use AirPort Express® and AirPlay to stream wirelessly to any stereo or powered speakers, or directly to AirPlay-enabled speakers coming to market in the months ahead.

AirPrint is a next-generation Wi-Fi print architecture that dramatically simplifies printing by completely eliminating printer drivers. A selection of AirPrint enabled printers including the HP Photosmart, HP LaserJet Pro and HP Officejet will be the first to support printing direct from iOS devices. iPad, iPhone and iPod touch users can simply tap to print their documents or photos wirelessly to any printer that supports AirPrint.

The Find My iPhone (or iPad or iPod touch) feature is now free to use without a MobileMe℠ subscription and helps you locate your missing device.* The Find My iPhone app is a free download on the App Store℠ and lets users easily locate a missing device on a map and have it display a message or play a sound. Users can even remotely lock or wipe data from a lost device to protect privacy.

Other new features that iOS 4.2 brings to the iPad include: the ability to rent TV episodes directly to iPad using the iTunes® App with a 30 day viewing window and a 48 hour session window once playback is started; the ability to easily find and highlight specific words and phrases on web pages in Safari®; enhanced enterprise support so businesses can take advantage of stronger security features, new device management capabilities and improved enterprise integration; industry-leading accessibility enhancements; and support for 25 additional languages, including Korean, Portuguese and Traditional Chinese.

The revolutionary iPad allows users to connect with their apps and content in a more intimate, intuitive and fun way than ever before. You can browse the web, read and send email, enjoy and share photos, watch HD videos, listen to music, play games, read ebooks and much more, using the innovative Multi-Touch™ user interface. iPad weighs just 1.5 pounds, making it easy to carry and use anywhere.

Today, customers have downloaded more than seven billion apps from the groundbreaking App Store and more than 300,000 apps are available to consumers in 90 countries, with more than 40,000 native iPad apps. Over 125 million iOS users around the world can choose from an incredible range of apps in 20 categories, including games, business, news, sports, health, reference and travel.