Interview: Wil Wheaton On Why International Tabletop Day Isn’t All Fun and Games (Only Mostly) 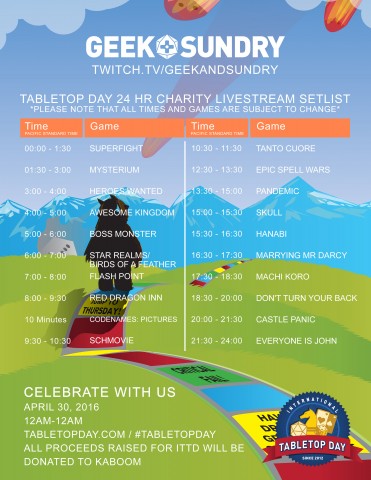 Today is the fourth annual International Tabletop Day! Whether you’re a hardcore game nerd, or a more casual player, today is a great day to either get some friends together, or attend one of the community events happening all over the world. Right now, there’s a livestream happening over at the official website thanks to the good people over at Geek and Sundry, and all of this is happening for a very good cause!

As you all know, Wil Wheaton is a tabletop gamer extraordinaire. He’s also the creator/host of Geek and Sundry’s hit digital series, Tabletop, where he and celebrity guests play all manner of awesome tabletop games for our amusement and edification. I had the chance to chat with Wheaton about this year’s Tabletop Day, the awesome children’s charity their 24-hour livestream is benefiting. and the occasional pitfalls that appear when the hobby you’re passionate about becomes your job.

Teresa Jusino (TMS): Tell us about KaBOOM! and why you’re partnering with them.

Wil Wheaton: Last year, or maybe it was the year before, Felicia had an idea to take advantage of the opportunity we have of having a lot of people paying attention to the same thing at the same time to do something good for the world. We wanted to find an organization that facilitated play and joy for kids, and we just could not make the logistics work out for a whole bunch of frustratingly boring reasons. So we weren’t able to do it.

We made it a priority this year so that we were able to do that. We went searching for organizations that we felt would fill the criteria that we were looking for, and Felicia found KaBOOM! We both thought that it was really cool that they facilitate joy and playing for children, and that they primarily address the needs of children that could very easily fall off the radar of the rest of the world, because they are in areas that are typically underserved by, just, the universe.

And I really liked that they do a lot to build playgrounds. I know that tabletop gaming is what we’re primarily about, and it’s great, and I love it, but we kind of just sit inside and play games. But something that facilitates outdoor playing and imaginative playing for children is really something that I care about. It’s really important to me, and KaBOOM! is just a great organization that’s really good at facilitating all of those things.

TMS: Outdoor play is great. And also, a great segue to LARP-ing…

Wheaton: For sure! It’s funny, right? When I was a kid, my local playground had a rocket ship. Probably a thirty-foot rocket ship with four stories. I would get in that rocket ship, and we would play Star Trek in that rocket ship. And then there was a big dome that had a bunch of hexagons, and you could climb around it…and that would be the Batcave and stuff. We’d use our imaginations.

For the little kid version of me to grow up into the middle-school version of me who absolutely loved role-playing games and bringing all that stuff to life, a playground is a spectacular place to start using your imagination, as well as getting the exercise that all kids need.

TMS: You’ve kind of become this spokesperson for gaming. So, though it was already a hobby of yours, now it’s sort of become work, too. Are there any drawbacks to that? Any advantages? Basically, does it suck the fun out of it for you? 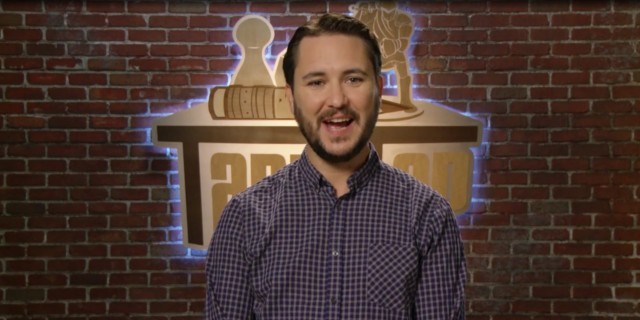 Wheaton: Oh, it absolutely can. Max Temkin and I were talking about how we have this incredible talent for turning something we love into work.

And I’m not complaining about that! This is a fantastic problem to have. Oh no. I love my job so much, it’s something I would also do for fun! Oh, no! Someone help me! And it’s very easy to lose that perspective and focus on the parts of it that are maybe what you associate with work.

In fact, last season [of Tabletop] by the time we were finished with the season, I was so burned out by the end that I didn’t want to do the show anymore, because I felt like this thing that I loved, that’s been a hobby of mine my entire life…it wasn’t about being my fun hobby anymore. It was totally about being my job. Even when you said I’ve sort of become a “spokesperson” for tabletop gaming, I flinched. Because I don’t want to be that.

I love so much that I have helped bring this hobby to more people than I think would have been brought to it had I not done this. I’m thrilled, and I’m proud, and I feel great about it. But I started to feel like that was all I was doing, and I couldn’t even play games on my own without thinking automatically “Is this gonna be good for Tabletop?” [laughs] Like, it started affecting my ability to game.

We took a very long hiatus between seasons, and we had to make a significant number of changes so that I could make another season and enjoy it. We had to fundamentally change the production schedule so that I wasn’t burned out and not having fun.

And listen, I know how this sounds. It’s difficult to talk about and not seem like a fucker. I know that for someone who works a real job to hear me go Oh, I’m not having any fun at my job anymore where I play games all day. Feel fucking bad for me. I know how that sounds! But as a creative person, and as a creator, I had to find a way to keep authentic joy in the creation in a way that didn’t take away from the same thing in my regular life.

TMS: Tabletop Day has become a worldwide thing! Have you had the chance to go to any of the other events anywhere else in the world? What’s the response been like?

Wheaton: I never get to go to events on Tabletop Day, because we’re doing our own thing at Geek and Sundry. The first year, it was a live thing at a studio. The second year, we had an actual event at a place in L.A, and that was really, really cool. But even then, I couldn’t play, because it was one of those places where if I sat down to play, people would be like “Hey! It’s the Tabletop guy!” and I just couldn’t…it was unreasonable for me to expect that I could just hang out. And it was also not cool for me to go down and be like Hey, I just wanna hang out. That would be like a baseball player going to the baseball game, sitting in the stands, and being pissed that he doesn’t just get to watch the game, you know?

Last year, we had another event at Geek and Sundry, and I intended to go and spend most of the day there, but woke up with this fantastic case of anxiety/depression/terribleness, and it was everything I could do to get to the livestream just for the hour that I was supposed to be there. The super-fun times of living with mental illness.

So, I don’t really get to do that, but I do get to go to game conventions. I still have the pleasure of getting to sit down and play new games with new people and remember what it was that made me fall in love with this hobby in the first place.

I think it’s really neat that we have this day where, because of the schedule we have, you’re playing Pandemic at the same time as thousands of other people. And even though you’re doing your own thing, you’re part of something that people you will probably never meet are all doing at the same time, because you all love the same thing. I think that’s really cool.

TMS: It kind of gives them the same experience as people who play World of Warcraft or something. Like the online gamers who have that sense of community and simultaneous play all the time, it gives tabletoppers that opportunity.

TMS: Will there be another season of Tabletop? What can you share about that?

Wheaton: We are in production right now, yes! I posted the full list of games on my website, and I have been making an effort every day after we wrap to post something about what we played and who we played with, just because it’s something that maybe five people in the world are interested in, and we wanna keep them happy. 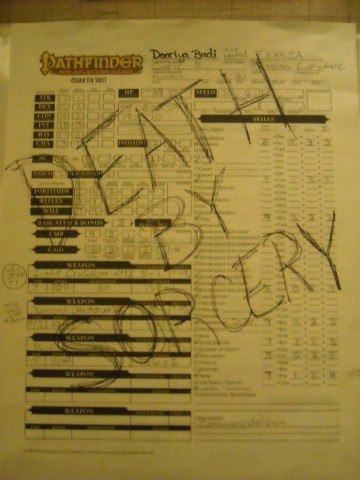 My first RPG character death! It was a total party kill, too. Brutal. RIP, Doorya. You were the best cleric ever.

Something tells me that more than five people might be interested in checking out the games that’ll be up for play on Tabletop next season! I’ve always loved board games, but in the past couple of years, my gameplay has expanded to stuff that involves *gasp* math. (I’m a writer. Words are my jam. I try not to math unless I absolutely have to.) I played my first Pathfinder campaign last year, and I’ve gotten way into Settlers of Catan, Ticket to Ride, and Dominion, which is probably the most addictive game ever. Seriously, I’m the queen of Just one more round! in that game.

I’ve also noticed that significantly more of my friends have gotten into playing some form of tabletop game as a pastime, and I’m sure that stuff like Tabletop and International Tabletop Day are in no small way responsible for that.

If you check out the Geek and Sundry Tabletop Day 24-hour livestream right now, they should just be getting started on a game of Flash Point! The schedule at the top of this post tells you what games they’ll be playing throughout the day, and they’ll have tons of fun guests and other great surprises throughout as well. And while you’re watching, make sure you remember that this is all in support of KaBOOM! Look into them, too, and see if you can find a couple of bucks to throw their way so they can help kids everywhere have safe places to play.

International Tabletop Day is a great day that reminds us how important it is to get together with friends and have fun! What games are you looking forward to playing today?