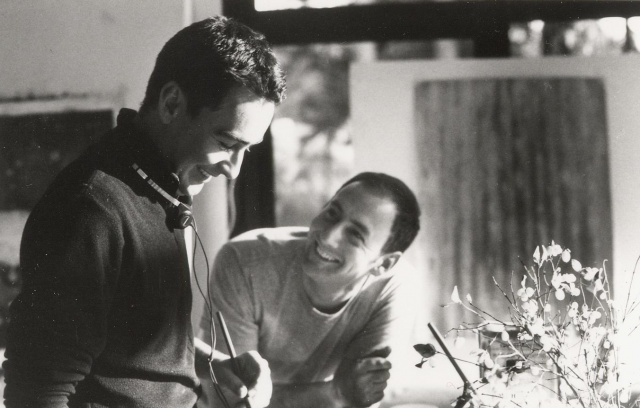 This Tuesday, Wolfe Films will re-release a remastered (from a 35mm print) and bonus filled Blu-ray and HD VOD of the 2000 debut film from filmmaker Thomas Bezuchaon (The Family Stone). The much loved dramedy was praised in its time not only for its depiction of fully dimensional gay characters (none of whom “had to die”) but also for showing an idealistic community fully accepting of gay residence. Set in a small town in Montana, the film starred Ayre Gross, George Coe, Tim DeKay, Eric Schweig, and Louise Fletcher and received 7 best film awards at festivals before its theatrical release. Thomas Bezuchaon, an openly gay filmmaker who says he came out at a young age, was available to discuss the film’s legacy 15 years later.

Lesley Coffin (TMS): Re-watching the restored version, is there anything in this cut that has been changed or which in retrospect you would have changed?

Thomas Bezuchaon: It’s funny that you ask that. The cut is the same, it’s just been remastered. But if I were to change anything about the movie, I probably would have taken about 5 minutes out of the cut, and specifically, I would have cut down the kiss. At the time, I felt like the kiss was this big statement, and there was a lot of debate about how long it should be. And at the time, I wanted it to be an almost uncomfortably long kiss, a little in your face, because the rest of the movie is so innocuous. But I think I over played my hand.

TMS: When you decided to make the movie, and essentially start your career as a filmmaker, were there things that you weren’t seeing in LGBT films at the time motivating you?

Bezuchaon: Absolutely. I wanted to go see a gay film where someone fell in love, and no one had to die in the end. That was truly the impetuous behind wanting to make this movie.

TMS: Were there any Hollywood film you were inspired by?

Bezuchaon: Definitely. I knew I wanted it to be a romantic comedy, and writer-directors like Preston Sturges and Frank Capra were huge influences on me. They were the movies that I really loved, because they were peopled by great character actors. People on the edge of the frame doing funny things that can add texture and extend the sense of family. And that was probably the other thing which I thought was missing from gay films at the time. There weren’t a lot of films about gay people with families, or extended families, unless they were all getting together for a funeral or because someone was in a hospital bed. So that was definitely a part of it.

TMS: I noticed that you included several scenes in a church, which in other films at the time was a source of the tension or rejection gay people feared about coming out. And yet Henry seems very comfortable there and so does everyone else. Why was showing that side of his life important to the character?

Bezuchaon: Henry going to church was definitely important. I wanted a gay character who was part of community, which happened to be a church going community, and fully embraced by members of that community. It is also the reason that he works for the school, the elementary school, without there being any issue about him being a gay man working with young children. I wanted him to be someone that was completely integrated into every part of this community, pretty much without comment. Because there is this question, which we get at when he and his grandfather are talking about the notion of shame in Henry’s life. If you take away all the outside resistance and hostility from people, would that make it easier? And I don’t think it necessarily always does. Sometimes shame is something we create on our own. It was just an interesting question for me to ask?

TMS: Almost immediately after the release, the film found a very loyal following. After the release in 2000, what kind of reactions did you get from audiences that either found it in theaters or years later on DVD?

Bezuchaon: The reactions and stories I’ve been privileged to hear are always moving to me. Anecdotally, people who live in small towns have told me, that is what it was like for them and that it is not that unrealistic a portrayal of coming out in a small town. But I’ve also had young people tell me, this is the movie I showed my parents before coming out. The most moving correspondence I ever received was from a woman in Hawaii, who had a brother that she described as effeminate, and they lived on a small island where everyone made fun of him. So he moved as far away as he possibly could. And his family never saw him again, because he ultimately died of AIDS. And she wrote, if she had seen this film back then, she would have changed the way she dealt with the situation and the way her brother had been treated.

TMS: The most common criticism I’ve read about the film is that it is simply too positive and optimistic, or simply an unrealistic point-of-view. How did you react to those criticisms?

Bezuchaon: I decided pretty early that people would bring to it what they wanted. And some people would embrace the film as a fantasy and appreciate the idealism on display. But it was always interesting to observe some of the resistance. It was a litmus test in a way. Some people get upset that there isn’t more conflict for Henry’s character, and that in itself is interesting. I didn’t want any of those old coots to homophobic. And if you are sitting in the audience, and thinking “that’s not the way it would go” you are limited to the way you see things are, rather than how they could be.

TMS: Showing the film in small towns similar to the one depicted in the film, how was the film received?

Bezuchaon: At the time, I don’t recall going to screenings in the Midwest with this film, so I don’t have first had experience. But what I believe, is that in a small town, there is a sense of accountability. You are more aware of the cause and affects, because the community is knit together so closely. And it can be harder to separate someone out, because you probably know their mother or work with their brother or something. And I’ve heard many stories of people who grew up in small towns and say, even if people didn’t agree, they felt accepted. Look at Johnny Cummings, the Mayor of Vicco, Kentucky. How likely did that seem 15 years ago?

TMS: You’ve spoken about and literally made a film about your parents, being very liberal-minded hippies, so I’m assuming you didn’t feel the need to leave home to find yourself?

Bezuchaon: No, not at all. But, I know a lot of people who did. And a lot of people who didn’t talk to their families, because they feared they wouldn’t be accepted. And part of the reason for the film, was to encourage or set an example with the character of Henry. Because it seems like the most important thing is to allow yourself to be known. How is anyone going to love you if you don’t let them know who you are? That’s essentially what Henry’s grandfather tells him. And Henry misses that opportunity, and I hoped that if anyone was on the fence, this would push them into the yard.

TMS: In this film and The Family Stone, the romantic interest of both gay characters sons are people of color. Did you write them with their ethnicity in mind or was that decided later in the casting?

Bezuchaon: In Big Eden, I wrote Pike as a person who happens to be half Native American. But that isn’t one of the defining aspects of his character, and I think Eric really responded to playing a character which could have been played by anyone, not just a Native American. In The Family Stone, Patrick, the character played Brian J. White, was written for a black actor. And it’s a little schematic. I wanted Patrick to be with the deaf son, to kind of stack the deck against Sarah Jessica Parker’s character. I wanted to throw her to the wolves of diversity.

TMS: Tim DeKay’s character is interesting, because there were very few characters in films 15 years ago who were written as genuinely questioning their sexuality and where they might fall on the spectrum in terms of sexuality, which didn’t label them as simply being in denial. How would you describe Dean?

Bezuchaon: I don’t think I ever talked to Tim about it, but he had such a strong grasp of that character anyway. And that scene in the truck, when he’s crying after seeing Pike and Henry, it isn’t about jealousy, it’s about morning this friendship and the genuine love he has for Henry. What’s been interesting is that 15 years ago, everyone seemed to want to know, is Dean straight or is he gay. And people are much less ridged now, and don’t care about having Dean identify one way or another anymore. That’s been really interesting to see over the past 15 years.

TMS: I’m a big fan of Louise Fletcher, and I’ve never heard anything but how sweet a person she is. It was a different kind of role for her. What made you cast her?

Bezuchaon: I had written the part for her actually. She had done a movie called Brainstorm years ago, and she plays a scientist in it. And usually she plays tough or mean characters, she was Nurse Ratched, and I loved her in this movie, because there is a moment when she smiles. And I said, I’m going to write a movie for Louise Fletcher where she gets to smile a lot. So I wrote that part, and years later when we were casting, I knew someone who knew someone who knew Louise. And a week later she called me at home and said “it’s a beautiful script and I’d love to be a part of this movie.” And my only regret is not asking her to do more, because she was so delighted about finally getting to be the nice one.