The cofounder and Executive Director of Smart Girls speaks to TMS! 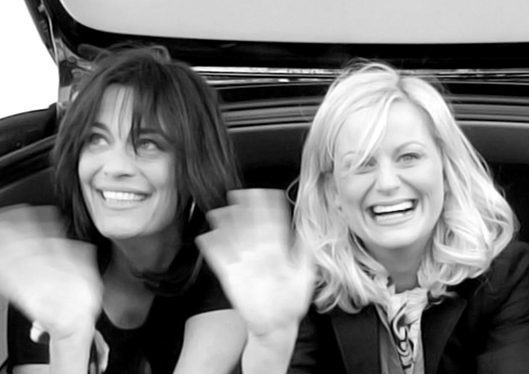 Smart Girls (in partnership with Geek & Sundry) will be live streaming music, dancing, magic shows, and improv comedy (along with the promise of cameos from some puppies and kittens) to raise funds for the Muscular Dystrophy Association (which helps those affected by Muscular Dystrophy, ALS, and related illnesses). The 24 hour live stream starts at 7pm PST today.

In 2008, friends and colleagues Amy Poehler and Meredith Walker launched a site for teenage girls and young women, which they appropriately titled Smart Girls. The site built an online community for both young women and the founders themselves to reach out and support each other during those crazy transitional years. While famous funny lady Amy Poehler became the public face of the site (and contributed plenty of hilarious and warmhearted material), Walker has been just as active as their executive director, and has become a highly respected spokesperson for the site and its mission. At SXSW this year, Walker was onsite not only to discuss the site (which just recently joined Legendary Digital Network), but to spread the word about combating online bullying. We spoke the day after the panel to discuss Smart Girls, her partnership with Poehler, and why embracing your weird is vital to self-esteem.

Meredith Walk: We’ve grown organically very quickly, and we really monitor and protect people on our online community, especially the younger people. We enforce our policy that you cannot be insulting. We encourage you to get into the conversation, but you cannot insult or bully, and you cannot tell lies. And because of that, we’re considered part of the solution to online bullying, because we’re teaching girls how to have a civil discourse. And then they go out in the world and engage in civil discourse in real life.

TMS: Do you know what the age range for the site tends to be?

Walker: We’re can’t give specific numbers, because most of the time, it’s a parent logged into Facebook on behalf of their kid. So we know they’re either on their parent’s account or online with a parent when they find us. But for the most part, we can report that our highest demographics are 18 to 24, but we know even anecdotally that girls that are younger are finding the site. Because we all know kids read things which are aimed just a little older, so I think most of our readership’s in the high school to college range.

TMS: The site has so much video content, how did you go about establishing the journalistic standards for a site that skews that young?

Walker: I was lucky enough to start my career under the tutelage of the great Linda Ellerbee when she was at Nickelodeon. And she committed to making Nick News a real news magazine show. And she won an Emmy and Peabody for her work on that show. So that’s where I learned where to find the story, and more importantly, how to find the people with the stories to tell. And then I brought what I learned there with me to Smart Girls. It’s all about finding the right people with the right stories that would matter to our audience. So for the most part, our job at Smart Girls is just to find those real girls with their own stories to tell.

TMS: How did you and Amy initially set the site up? What were your original plans for starting it?

Walker: We were just best friends talking, didn’t have a business plan or anything, saying “wouldn’t it be great if we could just help girls in some way?” And that talk organically led to what we have today.

TMS: Do you recall what brought up that kind of mission statement?

Walker: Have you read Reviving Ophelia?

TMS: Of course, in high school.

Walker: Well, I highly recommend rereading. I’ve read it a few times. And I really believe that none of us get out of adolescence unscathed. We just don’t know better, and that book reminds everyone: parents don’t know that much either. They’re dealing with an alien, their kids’ prefrontal cortex hasn’t even closed, adolescents just aren’t done yet. And knowing when those residual feelings hit us in adulthood, it hits you really hard. So we thought, what if you could take those moments from adolescence that worked, those moments when you felt really great about yourself, and looked at the causes of those moments. And a lot of them happen when you have someone older, not in your family, show an interest. Not about teaching or getting you into the good college or something. But taking you out into the real world and letting you be you. Letting you be your goofy self. Because there’s something so pure about that relationship. It’s not that intense love for the creature you created. It’s about showing a global concern for the next generation, because everyone deserves a relatively happy life.

TMS: Have you ever thought about why you narrowed it, so to speak, to focusing on girls at that time in their life?

Walker: Well, Amy and I have many years of experience being girls. So we could speak of that experience with some expertise. And Amy didn’t have her sons when we started. So we weren’t being exclusionary, we were just finding something we could talk about. But even though girls happen to be in the title, it’s open to everyone. We get messages from boys, parents of boys, teachers from all male schools, everyone.

TMS: Is the site non-profit?

Walker: Well, it’s funded by Legendary Digital Networks and this year we have branded content. But for the most part, we like keeping it as pure as possible. It’s more about how we can keep things going and having the content people come to the site for and keeping the social aspects alive. We’re starting to develop pilot programs, in the Austin area, to have branded content in schools and after school programs.

TMS: Have you worked with any teachers on developing this content?

Walker: Actually we didn’t. A friend of mine used to be a teacher and she’s the one who helped with the curriculum. But I’ve actually been the one to write most of our academic content.

TMS: Where does the humor side of the content come into play with the educational aspects?

Walker: Humor’s interesting because you can’t just shove it in anywhere. The integrity of Smart Girls is, it’s our voices you can hear. And I would say we’re both funny people, along with being bossy, smart, fun, and difficult to be around. So the humor has to naturally fall into place, because there are things where you just have to present the information in a straightforward manner. But we try to add humor where you can, because the difference of whether someone hears something or not depends on how they hear the information. When you say something strident and super serious, the people that need to hear it don’t. But if you say it with some humor, sometimes it can change their perspectives.

TMS: Since it launched, have you gotten used to being a public figure?

Walker: I have, and I will say, going out and interacting at events happens to be my favorite part of my job. Because nothing beats spending real, face-to-face time with the girls. It’s great to have the cyber club house when it comes to reaching a lot of people who are far away. But any chance I get to talk to the girls in the same room, I love. And it’s great for me, because Amy deals with an adoring public anywhere she goes.  But if I’m at a conference or panel, the people that flock are like minded and my work. I meet a lot of social justice people, and girls who want to be active. Those are the people seeking me out. I get a very pure version of Smart Girls when it’s just me.

TMS: What are some of your memorable moments with readers you’ve met?

Walker:  I had a girl come up to me last year after I did a panel who told me, “After I found Smart Girls, I didn’t feel like a misfit or like my weirdness is something to be ashamed of.” And she was crying. And I met another girl who told me how important it was to her that we’re not telling them what’s cool or how to be cool, we’re putting the focus back on who they are and telling them to focus on themselves. Our Q&As are always the longest because people have very personal experiences to share about how it’s impacted their lives.

TMS: Recently I’ve been hearing a lot about the idea that we need to teach young people, don’t just teach acceptance of someone’s differences, but kind of embrace your own weird. Are you seeing a lot of that on the boards?

Walker: It’s coming up a lot and I think we do encourage them not to hide their weirdness. I think Amy wrote something on the website when we were first putting it up, “your weird and wonderful self.” Because guess what, truth is, everybody’s weird. Some people stifle their weirdness and have a cubicle life, like the Matrix, but we say you don’t have to do that. Amy and I were totally weird kids, but people weren’t telling us that’s okay. So now we tell each other that all the time.

TMS: What was your relationship with Amy like at SNL?

Walker: We were immediately inseparable. She was like that first kid you meet at camp and the electric sparks start flying. We had a chemical connection, drawing each other together. And at SNL, we both benefited from one another’s friendship. She’s like chosen family, and we chose to be with each other for the big and small stuff.

TMS: What are some of your upcoming plans for Smart Girls?

Walker: We are trying to do a lot more live events. And we’re doing a road show with Title One schools, the less funded schools, primarily along the Gulf Coast. We are primarily concerned with getting Smart Girls into the real world, with live events and working with local chapters. We also just started a collaboration with the Peace Corps, which offers us a global reach.