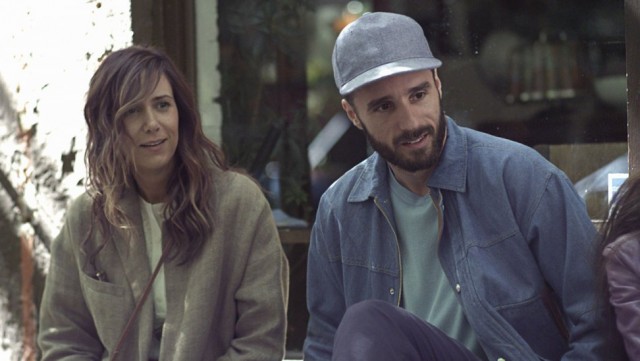 Chilean born filmmaker Sebastián Silva has been a filmmaker to watch since his 2009, when he released the award-winning The Maid. He has since written and directed the short series for HBO, The Boring Life of Jacqueline, and 2013’s psychological thriller Magic Magic and dramedy Crystal Fairy. His new film, the amoral hipster story Nasty Baby, also marks his first starring role, as multimedia artist Freddy. In the film, Freddy wants to have a child with his best friend Polly (Kristen Wiig) and boyfriend Mo (Tunde Adebimpe), while trying to launch his art exhibit (Nasty Baby) and dealing with a difficult neighbor. I spoke with Silva about the film, his personal connection to his character and story, and making diverse movies without commenting on diversity.

Lesley Coffin (TMS): Was this your first time playing a role in one of your films?

Sebastián Silva: I’ve only been in Crystal Fairy, in a scene where I’m doing blow with my brothers and Michael Cera. But I wanted the challenge this time. I’ve already written and directed, or co-written and directed.. And I saw myself in the story, because the story of Bishop (Reg E. Cathey) comes from growing up in Santiago, when I had the biggest asshole as a neighbor. It felt like it had to be me, because I saw myself in the role when writing it, but it could have been played by someone else. And had I cast a proper actor, I might have been better off and been able to sell the film for more money if I had a name. But I really appreciate the fact that my producers were comfortable having me in the film. And it wasn’t an egotistical thing, I don’t have a need to be on camera. But I want to be scared when I make a movie. I haven’t felt that kind of adrenaline making a movie since making my first film.

TMS: And this isn’t a film where you look out of place on camera or amateurish. Do you have a performing background?

Silva: I have performed live music and did that often in Chile. I had a band, and we would perform every two weeks. So I’ve been in front of audiences performing. But I think a lot of it comes from making movies. Unless you are a very awkward guy, every director has lost fear of cameras, because we deal with them so often. You’ve given so much direction about how to be in front of the camera or not to pay attention to the camera, that most directors probably can play a version of themselves. Because I’m not really playing someone that different from myself. I don’t think I could play a character and be directed by someone else, because I don’t think I have the actors’ skills.

TMS: Playing someone inspired by yourself, is there any concern that you don’t have a protective barrier between the audience and yourself, or people will confuse you for the character?

Silva: No, because this is a movie which isn’t primarily about the characters, but about what happens to them under specific circumstances. It isn’t like Nell, this isn’t about Freddy. It’s about what he and his friends are going through. I don’t think audiences will remember the characters, because they aren’t that remarkable. And it isn’t that I intentionally wanted to make a movie with unremarkable characters, but it’s the difference between this movie and another movie I made called The Maid. That film really was just about that characters. This film is about subjects, gentrification and parenthood, more than it is about the character.

TMS: How did you decide on the neighborhood the film was set in?

Silva: I actually live there, the house we filmed in is my actual apartment. And that is my cat. I’ve filmed in my own places before. With The Maid, we filmed in my parents’ house. So it isn’t like I wanted to show my place off, but it was just easier. We wanted to film in Fort Greene anyway, and thinking about the type of house Freddy would live in, I just thought, it would be like my house. So it helped the production, but the neighbor has those characters everywhere. Every character fit perfectly. Fort Greene is a good example of what gentrified neighborhoods are like, almost a beyond race gentrification. There are a lot of blacks and Latinos and whites in this upper-middle class neighborhood, so it’s almost like a multicultural gentrified area. It’s more about the difference of class than race.

TMS: How did Kristen and Tunde get involved?

Silva: It’s so boring. I’m good friends with Ali (Shawkat), who’s also in the movie, and she’s close with Kristin and Tunde, and just recommended I meet them when I was casting the movie. I’d gone through other people, who didn’t work out or got cold feet. So casting was definitely a process, and they weren’t the first people we thought of, but when Ali recommended Kristen and I met her, I just fell in love with this woman. I felt the dynamics would be perfect, and the same with Tunde. We met for a burger in Williamsburg, and he was happy to do it.

TMS: Regarding Polly’s desire to get pregnant and become a mother, we don’t see or hear anything about her romantic life. Why exclude that part of her life and not mention why she is choosing artificial insemination?

Silva: I felt like we were already dealing with so many subjects, that it seemed that brining in that part of her life was unnecessary and I think we would have gotten rid of that in the editing if we had included it. I’ve learned that lesson on other films, that sometimes when you bring in side stories, to give those characters background, it is distracting you from what the movie is really about. So there was a practical reason. But I also felt that Polly isn’t someone who has given up on love or isn’t interested in finding a relationship, but now she’s caring about herself as a woman. She’s like, “I want to have a baby and I’m not going to wait for a lover or relationship.” And I assumed that she isn’t unopened to a relationship, she just isn’t waiting for a man to move on with her family life. Which I find to be a modern statement.

It isn’t really even all that modern, but there are a lot of women whose dream it is to have a baby. And when they reach their 30s, they start saying “I want a baby, but I don’t have a husband or boyfriend.” And I’m just like, “so have a baby, you have the body for it, get some sperm and have a baby. Who cares about the dude?” And we’re very clear, that the way they make a baby isn’t a sex scene, it’s a baby making scene, like you would make a muffin. There are two ingredients, mixed in a special pot. Why is romantic love so attached? It feels like an old fashioned way of thinking, that she needs the man first. An idea the church has made about what a family is. And we talk about it briefly. A family isn’t a mom and a dad, a family is a new piece of and caring.

TMS: I liked the fact that Freddy is so hyper and Mo feels like such a calm, chill person, because we get a sense of what their relationship is like and why they are together. We don’t get much backstory, but did you consider their history when working with Tunde?

Silva: They’ve reached the point where they want to have child, so I assume that they’ve been together for a while. And sex isn’t even that big of a deal for them anymore. We don’t see them kissing or being flirtatious, they aren’t that kind of couple. Or maybe they were that kind of couple but aren’t anymore. They enjoy each other, even when going through harsh times, they find moments to laugh about things. There’s a lot of understanding between them. It is just a relationship that feels very settled and comfortable. I’ve been told, mostly by gay men, “they don’t seem to like each other enough.” And I’m like, well, they like each other enough to live together and go for runs and make a baby. Mo makes a big poster of a cake and puts it on the wall for Freddy’s birthday, so they certainly care about each other. That’s what I want from a relationship. I don’t expect my boyfriend to be kissing me on the forehead all the time or dry humping me while I do the dishes. That would be fun, but not all the time. Relationships settle and find their normality. And I think that’s where they’re at.

TMS: There has been so much discussion recently regarding diversity on film, and this film is very diverse, but you also don’t point it out to the audiences. And with the exception of the scene with Mo’s family, discussing what a family is, there is very little discussion about race or gender or sexuality in the film whatsoever. Do you think about those issues when making a film or how it would be received?

Silva: I couldn’t avoid thinking about it, because I’m writing it. But for me, it is just more how it is. This isn’t a gay movie, there just happen to be gay characters in it. It isn’t a black movie, there just happen to be black characters in it. It’s a diverse movie, but there is a mix of characters and actors. I live in Brooklyn, and that is how things are. That is what that area looks like. Straight and gay people, Latino and black and white people all living together. So I didn’t want to make a point to call it out in my movie, because it would be sort of infantile to feel like I have to keep making commentary about it. This movie isn’t opening a dialogue about gay parenting, because I don’t give a fuck if someone doesn’t like gay parents. This isn’t open to discussion.

I will never engage in an argument with someone who doesn’t think it’s natural. I just don’t have the time for it. And I feel the same way I think a lot of black people felt when there were separate bathrooms. How can you engage in a discussion which feels so outdated? And I think that gay people should really let go and not feel the necessity to feel like they need to keep fighting. Because to keep on fighting means you give a fuck what someone else thinks. And I truly don’t. I don’t go around all the time thinking I’m gay, and I forget my gay characters are gay too. Because when I make a movie about heterosexual characters, I forget they’re heterosexual. They are just characters who happen to be this or that.

Lesley Coffin is a New York transplant from the midwest. She is the New York-based writer/podcast editor for Filmoria and film contributor at The Interrobang. When not doing that, she’s writing books on classic Hollywood, including Lew Ayres: Hollywood’s Conscientious Objector and her new book, Hitchcock’s Stars: Alfred Hitchcock and the Hollywood Studio System.