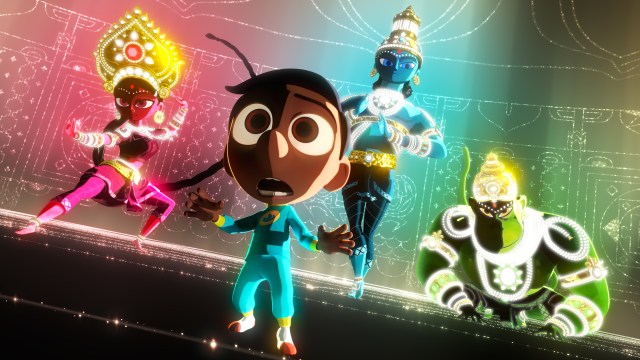 With every new Pixar movie not only comes the excitement of new family movie, but the appetizer of a new short. With the release this week of The Good Dinosaur comes one of the best shorts in recent years: Sanjay’s Super Team.

A little boy races to the TV for cartoons only to be called over by his father for Hindu meditation. Yes, it’s a big deal that the movie is Pixar’s move to showing more diversity in their storytelling, but it also happens to be a visually interesting, exciting, and heartwarming films that will likely win audiences over from the minute Sanjay bounces on-screen with his action figure. Longtime Pixar artist Sanjay Patel is making his directorial debut with this “semi” autobiographical film and was partnered with Pixar producer Nicole Paradis Grindle. Their team spoke with me about bringing this story to life.

Lesley Coffin (The Mary Sue): You put in right at the beginning that the movie is “based” on a true story, so I’m just curious what part of the story was inspired by your real life?

Sanjay Patel: The initial pitch was actually something completely different, and didn’t really have anything to do with family. It was just about a kid who wasn’t appreciating his culture and absorbed in comic books.

Patel: Yeah, and the premise was just about a kid appreciating his culture. And as I was telling the story, I showed this drawing I had, which illustrated the way I grew up with my dad. And I told John Lasseter a little bit about how I grew up, and that every morning, my dad would get up in the morning and worship his gods, while I would worship mine on TV. And I had this one drawing that really illustrated that, and straight away, John said he loved the idea about a movie about a kid not appreciating his culture, but he also really loved the idea that through appreciating your culture, you can build a connection with your father. And that was absolutely true of my own story and isn’t something we had to manufacture for this film. It took be 30 years to get here, but it is definitely based on a true story.

TMS: I know you’ve both worked at Pixar for a while, but this being your first time directing, how did you partner up and create the team for this film?

Grindle: They just kind of put us together because I was available. Perhaps it was kind of by design but no one told us that or gave us a reason why. But it has turned into a great partnership. We really get along well and I was very passionate about the story and bringing his vision to the screen. It’s a great story and I am personally someone who gets excited about seeing new and fresh voices on screen, and that includes having more ethnicity and women in leadership roles. So this project certainly resonated and we had a good relationship right away.

TMS: Had you ever worked on a film together?

Grindle: We have both worked on the same films, but in the past, Sanjay has always worked on animation or was part of the story team, and I was always in a different department. So this was our first time really working together.

Patel: But I’ve seen all of Nicole’s work growing up. I was obsessed with the shows she worked on at Liquid Television, like Æon Flux. And of course Roger Rabbit, which is one of the seminal movies of my childhood.

TMS: Father and son are so instantly endearing and sweet, because they aren’t hyper-realistic human characters, but they also have some very realistic features, like the design of their eyes. How did you decide on the character’s design and style?

Patel: There was a lot going on when we were thinking about and designing those characters. One of the big things were concerned about was how to link the designs of essentially the two worlds together, and show a connection between father and son with their features. But we also wanted to create a design aesthetic which felt universal for all the characters. Initially we designed father and son in isolation from the deities, but then John Lasseter came in and suggested finding something to unify all the characters. So our art director looked at classical Indian sculptures and saw that many have these beautiful eyebrows and noses which give the eyes an almond shape. So we used that to unify the characters.

TMS: Whenever doing a film that deals with religion, you have to consider how respectful you are compared to how much freedom you have, but with this film you also had to make the film both playful and informative for kids. How did you determine the approach you would take on this film?

Patel: Personally, I’ve done a lot of research and study of Hindu culture and find the myths to be very inspiring and appreciate how sacred they are to my dad and his friends. So going in, I knew exactly what we had on our hands. So each deity was carefully constructed and we paid close attention to the details, to make sure they were respectful. But it was also fun to think that we were introducing some people to them and showing why they are significant and how they are different. Why Vishnu is blue but Hanuman is green? And we made and thought about all those specific choices, because we knew right away that if we didn’t, we would upset some people. We just wanted to be faithful to the mythology. But from there, we wanted to form some connections which might have gone overlooked. In India, these classical myths are performed all the time, often in theater or dance. So we drew upon those traditions. We brought in an expert who had studied traditional dance in India, and taught our animators how to be specific in the deities’ movement, because we don’t use language in the film. So each deity was assigned a specific dance tradition. So we tried to give each layer an interesting way of introducing this culture to people who may have no knowledge going into the theater.

Grindle: But in a respectful way. We were so aware of those concerns, and didn’t want to do anything which might make those deities look too cartoonish or too much like the superheroes on Sanjay’s TV. That was parallel we drew, but we don’t want anyone to say they are just like superheroes. These are deities and we want to honor them.

TMS: The deities’ have that stream of light which makes the action sequences feel so unique and graceful in a way we haven’t seen before. Was that part of the reason you chose to look at dance traditions?

Grindle: We were talking about incorporating something which made things feel almost cosmic and infinite. And Sanjay is a big fan of Anime so he drew from those influences, but we also talked about everything from the Arora Borealis to an image from 2001: A Space Odyssey. And with all that brainstorming with our team, we found a way to turn that old, gray temple into something where the walls seem to melt away and turns into this cosmic space. We wanted to experience the transformation from something feeling enclosed and dark to something feeling light and beautiful. Really create a sense of the celestial realm on screen.

TMS: How familiar were you with Hindu culture?

Grindle: Not very much at all. I think I came at this from a very typical white, European background. I knew something of it, but very little. I’ve learned so much doing this film and found that part of it to be really enjoyable. I found there is so much depth that I never knew about before, and just hope other people from a similar background are inspired by this film to learn more. I’m sure a lot of people will go in saying “I don’t know about these deities” but want to learn about them. And they are just the tip of the iceberg.

TMS: You use the superhero connection in the movie as the little boy’s entry point into understanding what his dad is talking about. But when you were growing up, did you have any kid friendly things to teach you and get you excited about the Hindu religion?

Patel: I was born in the UK but raised in LA, so I kind of had three level of removed. And the community in LA was still pretty new. There wasn’t even temple nearby. But in the 70s, there were some comic books published called Amar Chitra Katha which means Immortal Stories or Golden Stories. But they were kind of frozen relics from the early 70s, but just kept in circulation because there wasn’t anything else out there. I mean, they aren’t X-Men comics, so I was sort of like “boring.” But it was crazy when I finally got a job at Pixar, the church of modern day storytelling, and felt moved enough by these myths to want to tell them in a way so a kind like me in a culture like this could appreciate them. That was a huge motivator for me, because those comic books I had as a kid were terrible and did not get me interested. I can appreciate them now as an adult, but certainly not a kid.

Grindle: But most religions have those entry points for kids or kid friendly version of the stories, but it doesn’t sound like that exists in Hinduism.

Patel: Nothing I was exposed to growing up.