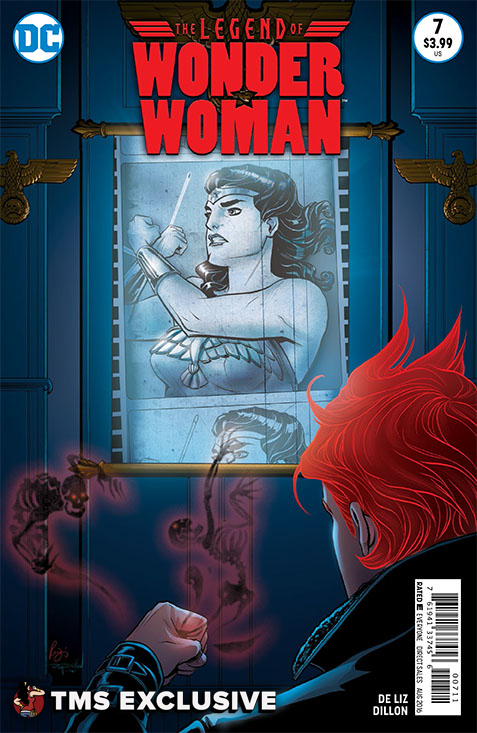 This being Wonder Woman’s 75th anniversary year, it seems to be all Wonder Woman all the time with new comics and a new live-action movie! One of the comics that came out this year is a lovely, digital-first, limited series called The Legend of Wonder Woman, which is now being released in print issues.

The Legend of Wonder Woman is a well-written and gorgeously-drawn retelling of Wonder Woman’s origin written and pencilled by Renae de Liz, creator of Womanthology, artist on The Last Unicorn, and writer/artist on a bunch of other awesome books. I had the chance to talk with her about her take on Diana of Themiscyra and why she thought she was the perfect person to bring new readers into Wonder Woman. We’ve also gotten some exclusive images from print issue #7, which is coming out tomorrow! 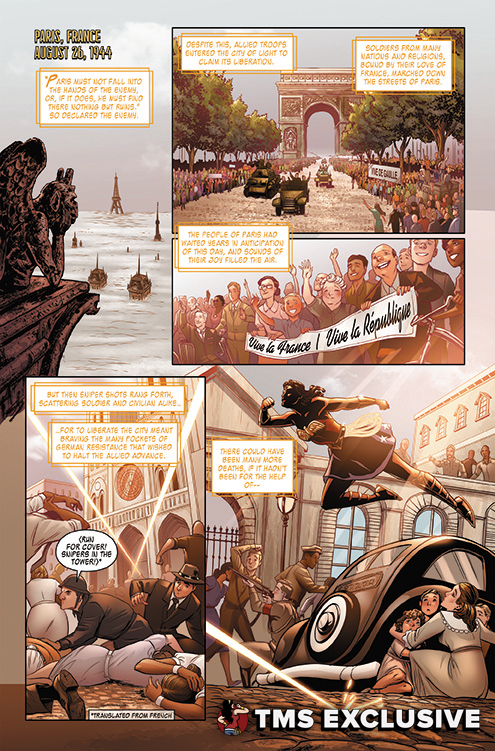 Teresa Jusino (TMS): Wonder Woman seems to be all origin story at this point, as it seems that she – more than either of the other two members of the “DC Trinity” – has had it told and retold in different ways. How did you approach telling her origin? How did you decide what to keep from her various incarnations and what to create anew or give a different spin to?

Renae de Liz: I work pretty intuitively, so I just “felt” which elements were a right fit for Wonder Woman. I paid a lot of attention to which things felt forced, and if something needed just a bit more focus. I grew up loving Wonder Woman, but never really read her comics. I strove to write a Wonder Woman story that would appeal to me as a reader.

In LOWW, I wanted to focus on the many aspects of Wonder Woman’s history that make her an amazing character and produce a story that balanced everything important in just the right way. I tried to focus on the essence of who Wonder Woman is, not just story elements. Part of that was to embrace her history, and many of its fun ideas. I love the Kangas, I love the Holliday Girls and Etta Candy. I love Steve Trevor and all Diana’s zany villains in her Rogues Gallery. I didn’t want to revamp any of them so much as draw out what I felt was the essence of these elements in a modern, yet classic way. 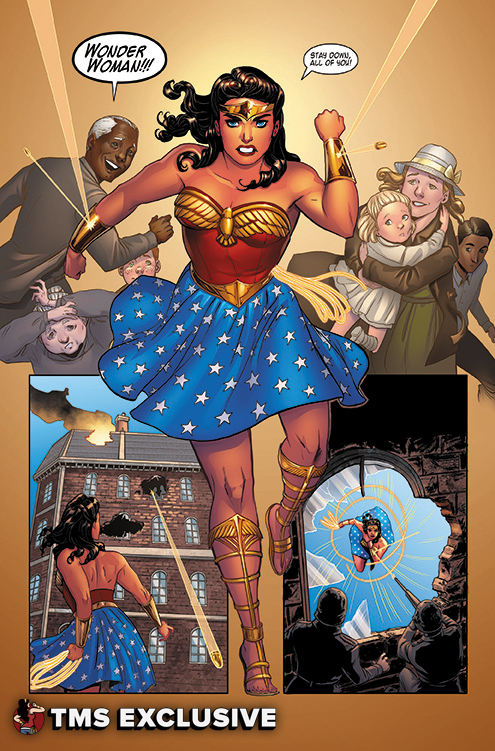 TMS: I’m always amazed by people who write AND draw their comics, as I’m exclusively a writer, so I can’t imagine doing both! Is there a world in which you would’ve done one or the other on this title, or did you have to do both? Why? What is it about this story that made you want to craft it entirely.

De Liz: I had to do both because I wanted both story and art to feel different than previous incarnations of the character, and I felt like I was the right person for this task. As a writer/artist, I’ve found many attempts to bring in new comic readers don’t stray away from what is known or comfortable in your average comics. They might get the right story to appeal to new readers, but the wrong art style, or vice versa; the art may be appealing, but the story doesn’t grip them.

I knew that if I wanted to reach new readers with Legend of Wonder Woman, it would have to be done with a different approach entirely, with aesthetics found in other genres and focusing on new nuances and sensitivities that have yet to be explored in Wonder Woman’s story. In this way, Wonder Woman is simple, but complex. But balancing a huge array of complexities, I feel, is a strength of mine. 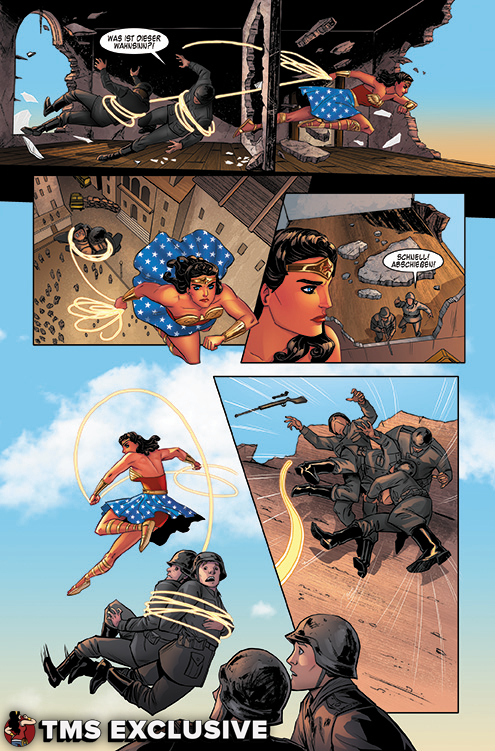 TMS: This is one of the most human versions of Wonder Woman I’ve ever read, and I think a lot of that has to do with the prominence of Etta Candy in this story, whom I love! What made you decide to include her and the other Holliday Girls as basically her Amazons on Earth? What do you hope readers get out of their involvement?

De Liz: There was no question in my mind that Etta and her pals would be in the series. She is such an important element to the early WW stories. In a way, Etta is to Wonder Woman what Robin is to Batman, but clearly special in her own way. Diana is strong in so many ways, and Etta is strong in others. Together they make a really classic, dynamic team.

I wanted to write Etta in a way that didn’t focus on her weight, but on all her amazing, fun-loving characteristics. I have personally always struggled with my weight, and when I was a young girl loving comics, I wanted so badly to see a character that reflected how I looked, but was as beautiful and accepted as other female heroes. A character like Etta is perfect for this, but she needs to be allowed to be funny, attractive, brave, strong, and loyal first…and just so happen to be a curvy woman.

As for the Holliday Girls, I didn’t get too much into their background due to space constraints, but I wanted each one to reflect different backgrounds, different ethnicities.  Together they’re pretty darn unstoppable.

I want readers to find themselves somewhere in my stories, and get the sense that no matter who you are, what you look like, whatever your life circumstances, you are strong, wonderful and accepted. It may take time for me to fully live this dream, but I will always have promoting diversity as a top goal.

TMS: I would love to hear your thoughts about writing Steve Trevor. He seems like a complicated character to write for, because one would want him to want to protect Diana because he cares about her, but also…she’s freaking Wonder Woman and can take care of herself. How did you strike a balance between his respect for Wonder Woman, and his very 1940s desire to “protect his woman.” How enlightened is he, both at the time in which this is set and through our modern lens? What’s the “key” to Steve Trevor?

De Liz: The key for me was to drop all preconceived notions of masculinity and to allow a different type of power to shine.

Steve’s strength isn’t in his muscles, being the best of the best at what he does, or making manly quips.  Steve rises above the machismo to true strength that resides in the heart and will always do what is right and help others. He is relentless to be there for Diana in whatever capacity she needs him, even if it means sacrificing his wishes.  He doesn’t care about being shorter than her, less powerful than her. His selfless love for her and perseverance to do good makes him strong in a different way. Steve is Diana’s light of strength when even Wonder Woman is in the darkness.

Beyond that, I wanted to portray Steve Trevor as the opposite of the traditional “strong male.” I have three sons, and see what they face in terms of expectations of their gender. Sometimes I feel anything I tell them as a mom is futile against the onslaught of what the media tells them. So I try my best to help them at home, but I also want to help create a Steve Trevor who reflects what I would want my boys to see as true strength, and help change the landscape of gender expectation on both sides. 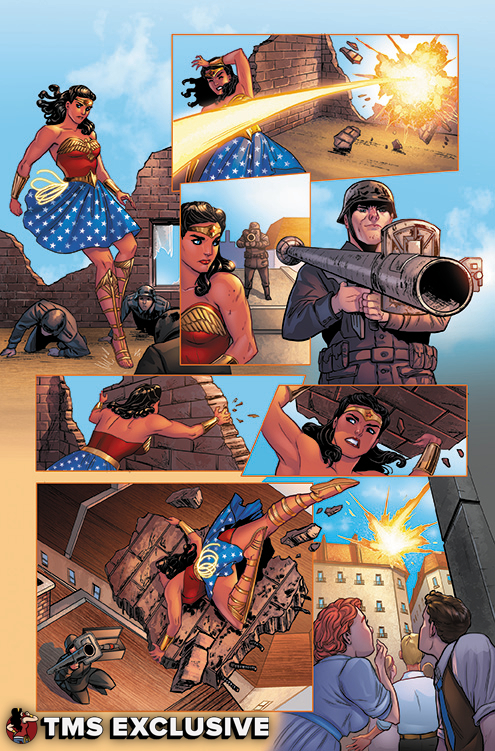 TMS: Can we expect any more Wonder Woman from you after this series is over? Will there be more of this Diana (and Etta!) in the future?

De Liz: Volume 2 is green-lit and I’m currently hard at work on it. I can assure there will be more Diana and Etta Candy fun, along with more classic Wonder Woman elements brought back.  As for more, that’s entirely up to the readers. If you want more, out-of-continuity series like this need support. Every time you spread the word or buy a book, you are voting for more series like this.

TMS: Any other upcoming projects you’d like to tell us about?

De Liz: Aside from LoWW Vol. 2, I’ll be working on my creator owned superhero book called Lady Powerpunch, a fun title focusing on unlikely heroes, where the main protagonist is a young woman who is “curvier” than other female heroes (which is not the focus, of course). I also recently completed a true-to-the-original Peter Pan graphic vovel which tells the first 1/3 of the book: “Peter and Wendy”. So I’ll be working on the second part to that. I’ve also got a Random House project coming out next year. Busy, busy, busy!