Interview: Randy Milholland on Depicting Sexual Assault and Depression in Something Positive 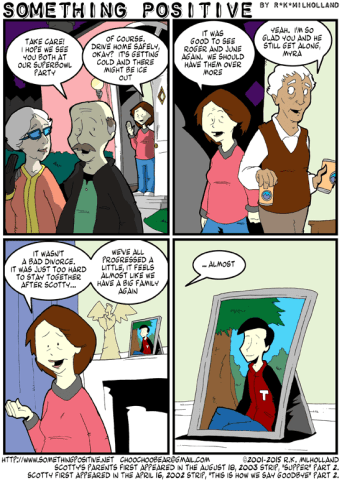 Something Positive is an interesting comic. It can have bizarre elements while also showing the highs and lows of life with thoughtful honesty. It can make easy jokes against simple villains or show nuanced stories where even the protagonist is the one who deserves comeuppance. It’s also a comic that has often, for better or worse, dealt with sexual assault and depression. Recently I spoke with its creator, Randy Milholland, about how his comic and its tone has evolved over the years.

Milholland started doing comics as a child, but the seeds for Something Positive weren’t planted until 1999 when he moved from Texas to Boston. In Boston he did a lot of work in local theater groups.

Unfortunately, he found it hard to get work that supported him financially, which led to a long period of depression. Things only began to get better in late 2001 when his friend, Clarine Harp (the original inspiration for Aubrey), suggested he do “something positive” with his life.

I had already been thinking about these two characters, Davan and Aubrey, who were based loosely on us. So I decided that’s what I was going to do. I launched the comic on December 19th. It was meant to be this sort of light-hearted, mean-spirited dark comedy…

[Dark humor] is the kind of humor I grew up with. I grew up in Texas. My parents are very southern and they’re very sweet but they also have this dark humor that’s very dry. That’s how I am with my friends too, to the point where, if someone were watching us from the outside, they might not realize we’re friends.

Since then, Something Positive has drawn a large audience of fans of dark humor and light elements of silly fantasy. It’s also one of the few webcomics out there where the characters age in real time. Over the last fifteen years the cast of SP has gone from being hedonistic twenty-somethings to more settled adults with careers, marriages, and children (and still a bit of hedonism).

Something Positive has had a wide variety of storylines. Some have been deliberately absurd, such as when an army of cat-girls went on a killing spree at a convention, or when Davan discovered that his pudding cat was slinking through plumbing to steal a woman’s underwear. Other storylines have been memorable for just how serious and realistic they’ve been.

From the beginning of the comic Davan has mentioned, remembered, and visited the graves of friends who committed suicide. In recent years Something Positive has also addressed the grim realities of having a parent die and of having a parent slowly lose their identity to Alzheimer’s.

For Milholland, these subjects were ones that came up for very personal reasons.

Scotty and Rose [Davan’s friends who committed suicide] were based on various people I’ve known…I didn’t always see the signs that they were suicidal. A lot of people fall when they’re in their twenties and that’s not something I usually see addressed. I wanted to talk about that and the long-term pain in people’s lives when someone kills themselves…It’s not something that people are sad about for a week and then move on from.

[When Davan’s mom died and his father got Alzheimer’s] I was dealing with fears about my own parents’ mortality. I thought it was important to accept, but I hadn’t seen it talked about in other comics…It helped me a little. I got a lot of messages from readers who appreciated those storylines.

Because of its dark sense of humor, Something Positive has also had a number of more controversial storylines over the years. This tone is set by the very first comic, where Davan sends a now-pregnant ex-girlfriend who cheated on him a wire hanger as a baby-shower gift.

I’m still really proud of that first strip. It really sets the tone for the rest of the comic. It shows how much of a jerk Davan is. Years later I had two follow-ups to it. One where Davan got punched and another where [the baby grown into a child] guilts him into buying her girl scout cookies…More people got angry about the follow-up than the original strip.

There are also a number of storylines that have included rape as a punchline. In one case Mike, an unpopular and rude gamer, was ruining a D&D session. As a result, his DM sets up an in-game scenario in which Mike’s character gets raped by a demonic tree hillbilly. This is a joke that has been referenced several times since. There were also issues with the character Pepito, a little person who was used as a (presumably consensual) sexual slave for years. After his abuser dies, Pepito starts to live a better life, but he still isn’t kind to those around him. As a result, when Pepito dies, he is shown going to hell — and it is implied that he will be raped for eternity by his abuser.

These are storylines that Milholland now feels regretful about.

[Those storylines] were handled clumsily. I wouldn’t do them now. Back then, I went for the easy punchlines and I didn’t realize it was wrong…I don’t want to remove those strips now because then it would be like saying they never happened. Now if I were ever to tell jokes about rape it would only be to make fun of the rapist. I’ve met more victims now and understand that situation better.

On the other hand, humor about rape was also sometimes a means of analyzing a difficult situation. In 2003 there was a storyline where Davan took medicine that was strong enough to leave him completely delirious and unable to comprehend the world around him. Some friends put him to bed, where his friend Kim found him and then decided to have sex with him. This scenario was a personal one for Milholland because it was heavily based on a situation he went through himself.

I got a lot of hate mail when I did that storyline. People didn’t believe that a woman could rape a man…The truth is it was based on a real situation. At the time my basic reaction was ‘That was rude!’ I got called a bad victim. I still really know how I feel about it…I admit I’d be angrier if it had happened to someone else. I know some male victims found it validating.

In the end I dropped the story because I couldn’t take the hate messages I was getting. I consider it a failed storyline now. Kim moved away and the others made jokes at her expense…If I’d kept going I would have discussed the situation more.

Overall, Milholland said he was still proud of most of the work he’s done. He once thought that Something Positive would end after ten years, then fifteen. Now he isn’t sure when it will end.

I might end it in year twenty, but I don’t know. I have a wrap-up in mind…I’ll do the strip for as long as I enjoy it.

[…] I’m proud of the work I’ve done. I think over the years [Something Positive] has gotten smarter. I’ve listened to a lot more voices and the characters have become more self-aware…I think it’s important to re-evaluate your work as your values change. It’s about growth.

Something Positive can be found here.