Interview: Nina Freeman On Developing Game how do you Do it? | The Mary Sue

The Mary Sue Interview: Nina Freeman On Developing Her New Game, how do you Do it?

I could almost envision myself when I was in middle school, packed in a room full of sweaty adolescents, some are aware and others not so much of their bodies gradually going through physiological and cognitive changes. I call this phase the “body limbo” because we are technically stuck in a transitory biological state as our sexual organs mature, drastically causing our bodies to change from the inside and out.

Even before adolescence or puberty strikes, children are naturally curious about sex, and they may even ask questions like, “How did the baby get inside the tummy?” or “Does kissing make babies?” Some parents may avoid these questions and the whole ordeal becomes a taboo because the nature of discussing sex to children may be inappropriate.

But if there is one thing I am sure of, it is that kids are really smart and often times we underestimate their ability to understand complex ideas. Nina Freeman, a game designer for Fulbright Company, also asks a similar question in the title of her game, how do you Do it? The emphasis is on the “Do” because it is a verb announcing a mode of action, and in this case, it is the act of having sex.

The game starts off with a little flair of jazzy background music by Decky Coss, and the pixel art by Joni Kittaka eases the eyes towards the mom and girl somewhat blankly staring at each other. The scene then gradually slides to the girl watching her mom drive away from the house. Ever so casually, the girl giddy with excitement takes out her Barbie and Ken doll stripped off of their miniature clothing, exposing their bare plastic bodies. how do you Do it? is a game that gives its audience a window to discover the act of  sex from the perception of a little girl. 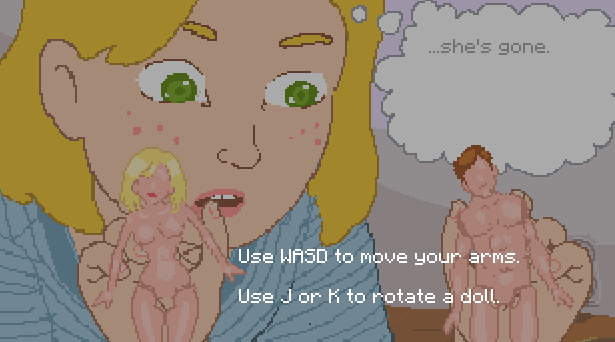 The screen pauses and shows a set of instructions telling the player what to do. I nodded my head and went along with it, and all of the sudden I am now the girl, rotating the dolls and banging them against each other, and I was hoping that if I bang them hard enough, I would make something happen like rubbing flint against steel to ignite an ember. What I really appreciate about this game is its clunky mechanic.

Nina along with Emmett Butler have executed in those few minutes of gameplay a reflection of what most sex is like for the first time: an awkward meeting of naked bodies, and I don’t think that feeling of self-conscious inconvenience never does go away completely. The sequence ends and you are taken back again as a spectator right when the mom enters the living room. The expression on the little girl’s face is priceless as she is both embarrassed and apprehensive at what she has just done. The screen fades into a black background contrasted with bold white text stating how many times you had sex. I think I did it about 85 times. What do I do now? Well I can “Do” it again. 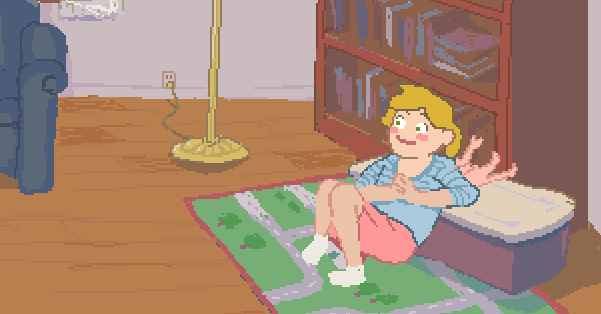 I could keep speculating about what the game means, but I think it is best to check with lead developer and designer Nina Freeman on what motivated her to craft how do you Do it?

Kaira Zenine Villanueva (TMS): How did you arrive with the game design for how do you Do it? Was it always something you had in mind for a game?

Nina Freeman: The night before Global Game Jam in 2014, my partner Emmett Butler and I were at a wine bar. We were drinking and chatting about silly childhood memories. My go-to funny childhood story has always been about when I used to play house with my Barbie dolls, and how I’d bang together their plastic bodies together as if they were having sex. While I was telling Emmett this story, it occurred to me that it was a very visceral memory–a memory grounded in physically mashing these dolls together. The physicality of this memory seemed readily expressive within a game context. In retrospect, my conclusion makes a lot of sense, because playing with dolls is a game, so why not express that kind of play in a digital game context. In short, the idea for “how do you Do It?” had been waiting for discovery for quite some time, because it’s a memory I’ve always found interesting to explore.

TMS: I saw that you also added Titanic references—that was a nice touch. I remember huffing my hot breath on the bathroom mirror when I was a little girl just so I could reenact the infamous hand scene from Titanic. How did that movie scene affect you when you were young?

Freeman: My experience seeing Titanic for the first time, like the doll sex memory, has always been a memory that I reflect on frequently. I was about seven years old when it came out in theaters. Of course, it was a big deal at the time and everyone was talking about it, so I desperately wanted to see it. However, my mom was opposed and refused to take me to see it. Fortunately, my dad was always enthusiastic about keeping me up to date with the latest cool stuff, video games and movies alike, so he subverted my mom’s wishes and took me to see it. I was obviously in awe of the car sex scene, when Rose runs her hand down the foggy window of the car, as you mentioned. That was the one scene that really stuck with me from that movie. I remember going to the playground at school with my friends, and re-enacting that scene. We didn’t actually kiss or touch each other, but we would hide under the huge tires in the playground and slap the sides of them, giggling and repeating lines from the movie. I’m pretty sure I usually played Jack. I can’t quite remember, but I’m sure we made some kind of kissy noises as well, haha. That really was the first time many of us had seen such a sexual scene in a movie, so I think my friends and I were all fascinated by it, to the point that we’d regularly roleplay it.

TMS: If you could go back in time to meet your self as a little girl and she asks you, “What’s sex?” What would you say?

Freeman: This is an incredibly hard question to answer, and I’d probably do a terrible job at explaining sex to anyone, because it means so many different things. It’s probably impossible to pin down one definition. However, if I tried, I’d tell my younger self that when people feel excited or warm towards other people, sometimes they want to express that feeling physically. The physical expression of that affection can sometimes lead to sex, which usually involves lots of touching and kissing.

You can download how do you Do it? for free via STEAM or by visiting Nina Freeman’s website where you can also find the rest of her collection of vignette games.