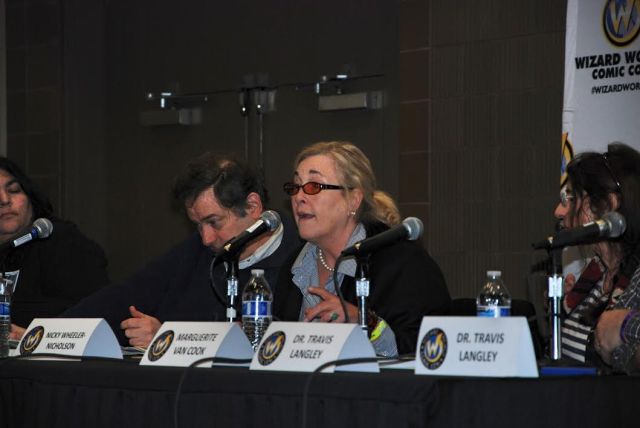 If you’ve ever read a DC comic, you owe a thank you to Major Malcolm Wheeler-Nicholson for founding the iconic company, and paving the way for the comic book as we know it today. If you’re unfamiliar with his name, I have good news for you: His granddaughter, comic historian and writer Nicky Wheeler-Nicholson, is dedicated to preserving the memory of her grandfather and getting his incredible story of comics, publishing, story-telling, and life as an American soldier to the masses.

For her latest project, she’s co-writing her grandfather’s biography with Eisner Award winning author, Gerard Jones (Men of Tomorrow: Geeks, Gangsters, and the Birth of the Comic Book). I had a chance to sit down with Wheeler-Nicholson at last weekend’s Wizard World Comic Con, New Orleans to discuss her upcoming book, and the state of women in comics today:

The Mary Sue: What is the name of your upcoming book, if you have titled it already?

Nicky Wheeler-Nicholson: We have, it’s called: Lost Hero: The Adventurous and Tragic Life of the Man Who Invented Comic Books.

TMS: So, how long have you guys been working on this?

NWN: We decided to work together in 2011 or 2012. We had been dancing around this for awhile. The way I met Gerard is when he wrote Men of Tomorrow (I think it came out in 2004), he followed the prescribed notion about my grandfather; that he was a minor character and that he was eccentric because the stories that came down about him were from the people who had stolen the company, and from younger guys who had worked for my grandfather (and I guess he had appeared eccentric to them) but, he certainly was not. He was a very elegant, intellectual person. So, when Gerard’s book came out he had this whole piece about my grandfather and it was just crazy. My aunt, who was alive at the time and lived in London, saw an article about the book and in the article it talked about my grandfather in this way and she flipped out, called me in the States, was raising hell, you know, just wanting to rip everybody to shreds! [laughing]

And I kept saying, “Ok, ok, just let me get the book first!” So, I got the book, and sure enough, it was bad. So she wrote a letter to the editor of Business Week, it got passed to Gerard, and he was totally apologetic and she told him to get in touch with me. He got in touch with me and we’ve been corresponding back and forth since 2004. In 2008, when my grandfather was inducted into the Eisner Hall of Fame at San Diego Comic-Con, we met for the first time. That was the first time he suggested to me that we might want to work together. I thought about it off and on for awhile, and then finally in 2011 I realized that this was the smartest thing for me to do because as a member of a comic book family people are not going to take me as seriously as they will with someone like him who has the credentials, although I do a lot of research. I don’t spout stuff off the top of my head just because I’m a family member, you know. I don’t do that. I’m very careful about that kind of thing. I’m an early comic book historian, and I have a Masters Degree in classical Greek theatre and mythology, so I’m not some flaky person. [laughing]

NWN: [laughing] No! No, I do my due diligence! Which is why these guys [convention producers] are so good to me, because they know that I know what I’m talking about. So, yeah. So… then in 2012, somewhere in there, [Gerard and I] met specifically to make that decision, and we decided it was the perfect thing to do. And, I LOVE working with him! I love working with him. He’s a really great guy, smart as he can be, a lovely person. I couldn’t ask for anybody better!

TMS: When is the book expiated to come out?

NWN: It’s probably not going to be for at least another year. It takes a long time, you know, with this kind of thing.

TMS: Ok. So, as far as other types of comic book things, you wrote an article about Wonder Woman for Women’s eNews awhile back, have you had a chance to take a look at any of the new Wonder Woman stuff that’s come out with-

NWN: Oh god! Ok, I want to be careful here because I haven’t read the book yet, so I don’t want to say too much until I’ve had a chance to read the book. The problem is, for me, that because I’m a member of a comic book family, there is a camaraderie among comic book families, like I know Jens Robinson, I know Jerry Robinson’s family, I know the Marston family. [laughing] I’ve spent a lot of time with Pete Marston, the son of William and Betty (his wife)…

TMS: So, it’s a much more personal thing?

NWN: Yes! And I know Christie (his granddaughter) really well. She has a big presence in social media with all things Wonder Woman, so it’s a little difficult for me because I know how they feel about it. And, they’re not all that happy. They feel like there was some emphasis that should not have been there, and that there was some scholarship that was wonky. But, that’s their opinion, you know. I mean, I think it’s great that she did this book, and I think it’s really important. And we need a lot more along those lines, for sure!

TMS: Have you had a chance to maybe keep track of the way the character is being written today?

NWN: I’ve looked into it some, but you know, I have to be honest, I wrote an article for The Beat a couple of days ago about the whole Charlie Hebdo thing and… Je suis Jane Austen! You know, true confession, as much as I love comics and I love hanging out with people and hearing all of the minutia of it, I’m one of those women that just… I’m offended. I’m offended by the way women are drawn in comics today. I don’t read them. The minute I see that, I’m totally turned off. I’m not gonna read it. I just can’t get past that. It’s really hard for me because at the same time, as I said in my article, I don’t speak specifically against any artist because I don’t want to be censored, so I’m not going to censor anybody else! So, my attitude is, I don’t like it so I don’t read it! And, other people might really love it, so [to] each to his own!

TMS: That’s fair. So, is there anything that you would like to see more of in modern comics as they come out?

NWN: Well, you know, Ben [Katchor] said something maybe yesterday in one of the panels that he and Danny [Fingeroth] and Dean were doing, Dean Haspiel, and he sees that there’s a whole movement happening of creators owning their own work and doing completely different things from mainstream comics, and many of them succeeding and I think that’s a very positive thing. My grandfather was a really creative person and I think I inherited some of that, you know, just that love of the creation, and that’s what I love about comics. Even people who are working with mainstream comics, Shawn Martinbrough, does some mainstream things and oh my god, I love his work! It’s just fantastic! You know, I’d love to see more women! I’d love to see more women editors, publishers, writers, artists have a chance in the mainstream. That would be nice!

For more from Nicky Wheeler-Nicholson, you can find a teaser selection from Wheeler-Nicholson’s upcoming book, Lost Hero, posted to co-author Gerard Jones’ blog, or y could also check out her latest publication, The Texas-Siberia Trail(a collection of The Major’s pre-comic adventure stories), co-edited by John Locke.

Eris Walsh (@SheGeeksBlog) is obsessed with Batman, Neil Gaiman, chemistry, Doctor Who, and baseball. She also enjoys scouring conventions for fantastic examples of cosplay craftsmanship and discussing role-playing games (both table top and LARP), comics, movies, etc. with other enthusiasts. Eris can also be found on her blog She-Geeks, where she writes about geek stuff; On Comicosity, where she posts comic book reviews; and on the Krewe du Who community webpage, where she posts weekly reviews of current Doctor Who episodes.