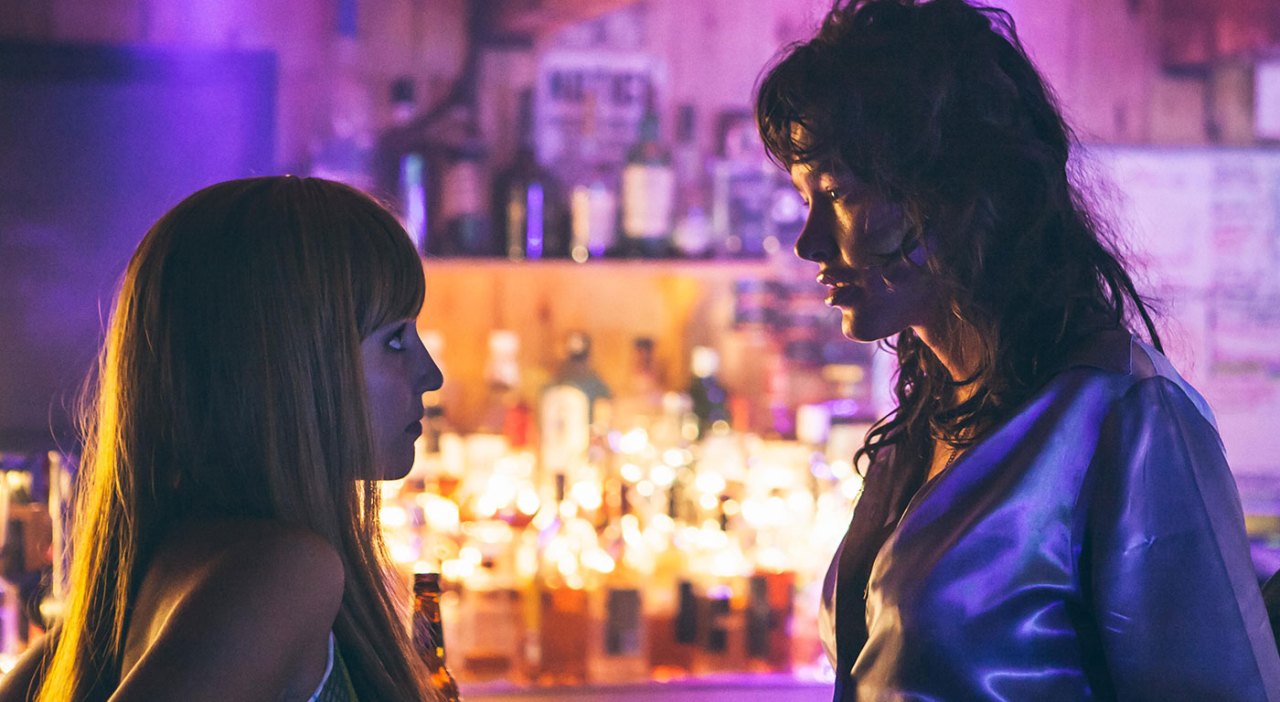 After screening her 10-episode comedy webseries “Be Here Now-ish,” Brazilian-born Natalie Leite is making her feature writing/directing debut at the Tribeca film festival with Bare. Previously making documentary shorts for Vice and several music videos, and the recipient of the Queer Arts Medal, Kodak Grant, and a Sundance Screenwriting finalist, Leite is also a visual artist, with her drawings and photography in galleries. She seems a far cry from the directionless character she’s created in Bare, a film about an aimless 20-something Sarah (Dianna Agron of Glee) who befriends Pepper (Paz de la Huerta), who deals drugs at a strip club, and introduces Sarah to another world within her small town. I spoke with Natalie about making her feature debut at the Tribeca Film Festival.

Lesley Coffin (TMS): What made you think of setting a coming-of-age film in a strip club?

Natalie Leite: Well, I think we showed a very different image of strip clubs than we’re used to in movies, because we made it a very surreal space, which is how we wanted to set it up; we wanted it to be out in the middle of nowhere, in a desert, and little bit psychedelic. So I don’t know if it is at all a representation of what the strip industry looks like, because I wanted it to be representative of [Sarah’s] internal struggles, so everything is told from her point of view.

TMS: The lighting design if very unusual, and creates that dreamy quality which stresses this being told from her point of view.

Leite: I wanted a way to define the two worlds, because they are literally so close together. She lives in the small town the strip club is in. So I wanted to create the world of this small town… her family and friends and jobs, and that is very bright and kind of bleached out and monochromatic. And then Pepper’s world, and the world of the strip club, is far more colorful and exciting, although sometimes, those scenes look extremely dark. So we really wanted to distinguish the two worlds.

TMS: How familiar were you with the kind of small town life you were depicting in the film?

Leite: I’m originally from Brazil, but I’ve been in America for 12 years. And I’ve spend a lot of that time traveling across the country, and living in those small towns. I’ve always been fascinated by small town life, and also part of my family is from a small town in Brazil, and there is a shared mentality to small town life, despite cultural differences.

TMS: When first writing Dianna’s character, what age did you imagine her being?

Leite: I planned it out that she would be in her early 20s, so a few years out of high school. I know that if you grow up in a small town, it is somewhat rare to go away to college, and a lot of people don’t even go to college and start working in the family business or a local job. So I imagined that she didn’t get into college, had a few years of adult life, had worked a few jobs, and was starting to wonder if this was the path she would be on forever.

TMS: Do you think that at the beginning of the film she was seriously considering marrying and starting a life with her boyfriend?

Leite: I do. I think when the film starts, she’s going along with this relationship with a guy who wants to be with her. But there probably isn’t much passion in that relationship, and I think she finds her passion for life, not for another person necessarily, with Pepper. And that relationship is what ignites this change.

TMS: What is it about Pepper that would draw Sarah in so much that she would go into the strip club and start a romantic relationship with Pepper?

Leite: I think Pepper’s character is really magnetic because she seems almost like an alien in that town. I think Sarah finds Pepper fascinating and loves how much freedom she has. And the fact that she doesn’t seem to have a past.

TMS: What made you think of Diane for the role Sarah?

Leite: I think she’s incredibly talented and such a giving actress. I can’t speak for her, but I think she was at a point in her career that she wanted to take a new step in her career. She is so smart and has so much to bring to the character. And she was willing to go to those places that the character had to that other actresses might not have been comfortable doing.

TMS: Did you consider Sarah’s interest in Pepper, and the sexual relationship she had with her, a result of general uncertainty or was she actively questioning her sexuality at that time in her life?

Leite: I don’t think Sarah ever questioned if she was gay, straight, or bisexual. Her journey is about breaking out of the box she is in and she isn’t looking to fit into another box. I think she’s just trying different things out, and is just drawn to Pepper as a human being, and isn’t thinking about anything else. I don’t think she ever thinks about her sexuality, and this might be the only sexual relationship she has with another woman, or just her first, and it doesn’t really even matter.

TMS: One of the most interesting scenes Sarah has is with the older stripper who explains the way things are and how to spot the right kind of man to make some money. Did you talk to any women in the industry to get an understanding of that kind of mentality?

Leite: I did. There was a lot of research involved and a lot of the dancers in the film are real dancers. It was important to me to depict this world authentically and involve the community surrounding the club. Where we filmed is where I did the research, and in that moment when the older woman is giving Sarah the lay of the land and teaching her to find the right man, that speech is taken from the research I did. And while she is telling her about what happens in this world, she is also voicing to Sarah why she is so attracted to Pepper.

TMS: Where did you shoot the scenes of Sarah’s other, public life?

Leite: We shot the entire film in a town called Moriarty, a small town of about 2,000 people we tried to involve a lot of the town. There was a grocery store there that we were allowed to use and that is the story Sarah works at when the film begins.

TMS: Were you concerned about the way you were representing small town life and specifically the people in Moriarty, as petty or small minded people?

Leite: I was concerned because I never wanted to suggest that living in a small town creates petty people. But at the same time, because this is Sarah’s point of view and her story, there are times when we go into a surreal space and see people through her eyes as petty or closed-minded. Her view of her life at that moment didn’t have a lot of meaning in it. That doesn’t mean the town is like that, and no one is a bad person in the town. Sarah just doesn’t want to be in the town.

TMS: Is that the reason you wanted to include moments of fantasy?

Leite: For sure. I wanted it to be clear that the film is from her point of view and that there are moments that are just in her head. Her first dance in the club has that surrealism that is clearly not what is actually going on.

TMS: Why, if the film is from Sarah’s point of view, did you open the film with Pepper, who Sarah doesn’t even know at the time?

Leite: I thought it was important because the story is about two worlds colliding. And even though Sarah is the protagonist, I wanted it to be clear to the audience that this other thing was going to come into Sarah’s life and foreshadow what was to come.

TMS: The characters are constantly talking about animals; where did that idea come from?

Leite: I don’t know. It is definitely something I’ve talked about with my friends. There are a lot of animal references in the film because I think Pepper is a woman guided by instinct, and Sarah wants to be guided by instincts, but at the beginning is guided by society’s forces.

TMS: What was the original inspiration for the film?

Leite: Like everything I do, the film is inspired by my life and people I know. But it isn’t autobiographical. I didn’t work at strip club when I was 22, or even in Nevada. It’s just sort of an allegory for moments in my life.