Interview: Misha Collins Talks About a Bigger Challenge Than the Apocalypse: Getting Kids to Eat Healthy

We have a club for that. 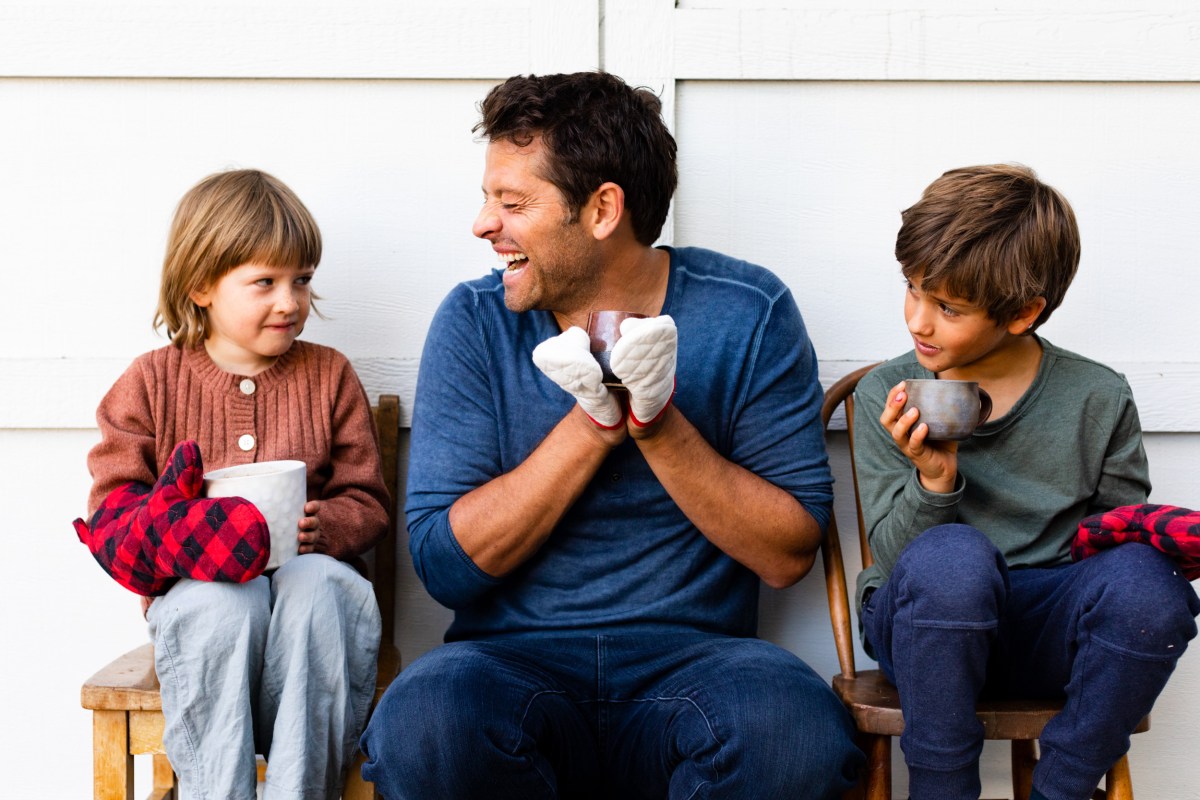 Parenting is hard. Seriously, just the act of keeping a small, opinionated, stubborn person alive every day is one of the most difficult things we humans will do. Kids have no regard for their own safety or health, and it’s up to us to teach them things like “don’t stick that bean up your nose,” or “don’t play with the open bottle of water, it will get all over you,” and the hardest thing: “food is good for you and you should eat it.”

These are all actual conversations I’ve had with my own kid just in the last two weeks, and in none of those instances did she actually listen to me; she had to figure those things out on her own. (Don’t worry, we got the bean out.) But that’s how kids work—they learn better with us than from us, and that’s the whole point of The Adventurous Eaters Club, the new cookbook from Supernatural star Misha Collins.

Collins is a busy guy, what with running Gish, acting in the final season of the longest-running genre series in U.S. history (The CW’s Supernatural, naturally), working with his charity Random Acts, and spending time with his wife and co-author Vicki and his own incredibly cute kids and sous chefs, Maison and West, but he managed to find some time to answer questions about his new book and give me a little bit of hope for my own picky eater. 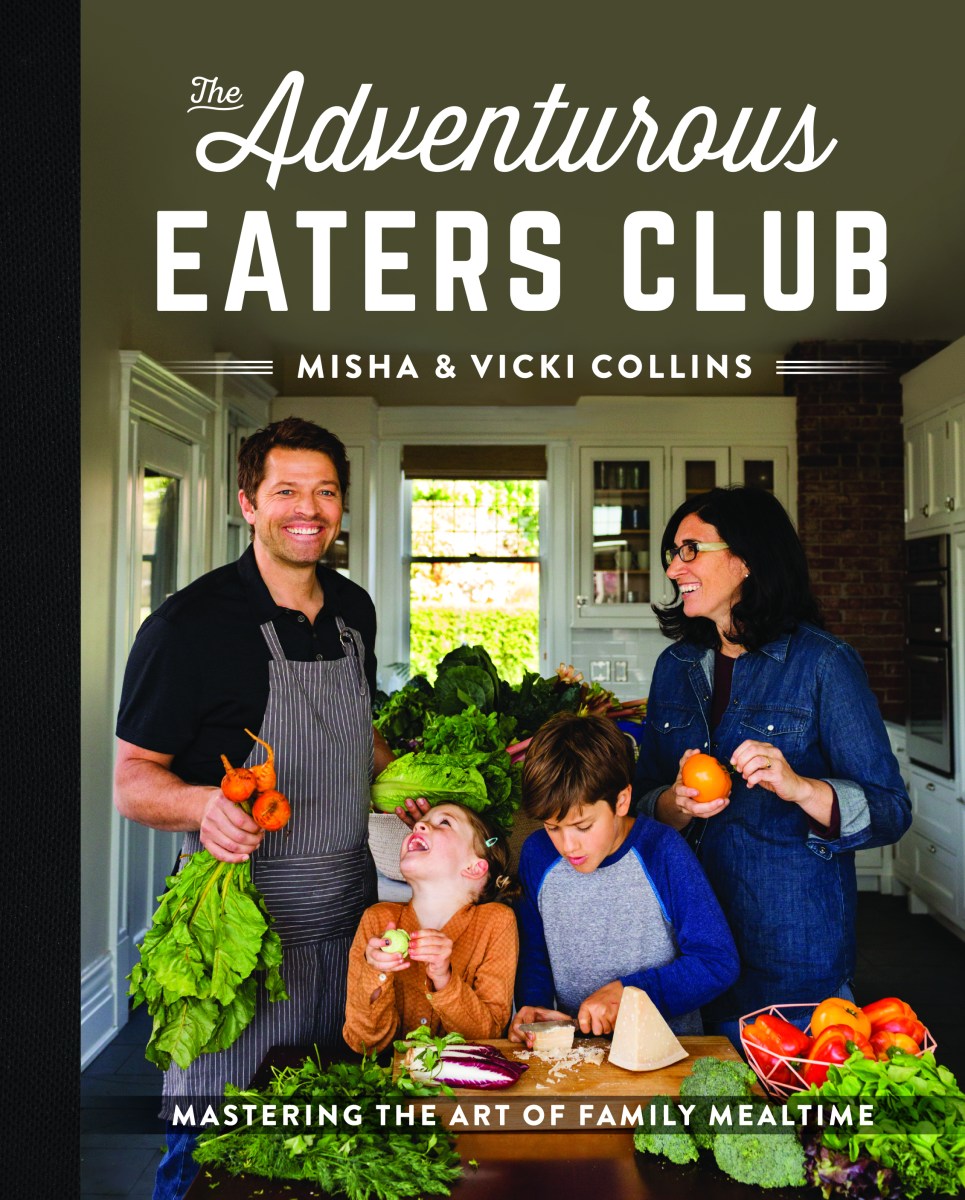 The Mary Sue: I was really interested in the cook book because I, myself, am the parent of the most stubborn, picky toddler in the world. It’s hard enough to get ice cream and cake into her mouth, let alone a vegetable. I really appreciate the idea of making food and cooking fun for kids, but what do we do when the kid has a will of steel and just won’t try things?

Misha Collins: Well, first of all: I feel your pain. We’ve been there! When our firstborn was a toddler, my wife and I went through a nightmare phase where we’d feel lucky if we could squeeze a tube of processed yogurt into his mouth or get a goldfish cracker into his gullet before it was launched back at us at supersonic velocities.

But, one thing we learned from pediatric nutrition experts is that pressuring kids to eat actually decreases their appetites. In other words, the more parents push, coerce, trick, bribe, or cajole, the more resistant kids become to eating what’s presented. The experts taught us that it’s the parents’ job to choose what foods are served at mealtime, and it’s up to children to decide what to eat from what’s on the table. Let them come to it on their own terms. Be patient and remember that taste is learned—just like reading and math. It can take 10-15 exposures to a new food before a kid will taste it and it might take longer before they accept it or enjoy eating it!

Another strategy that completely changed our family’s relationship with food was inviting our kids to cook and play in the kitchen. Ask leading, open-ended questions like,  “What do you think that tastes like? Let’s find out …” to show them you’re on the journey together. Then, steel your own stomach, because sometimes, what they want to make isn’t what we’d call “palatable.” But when it’s made by their own hands, they’ll be proud and more inclined to try it, so put on your game face and be encouraging. 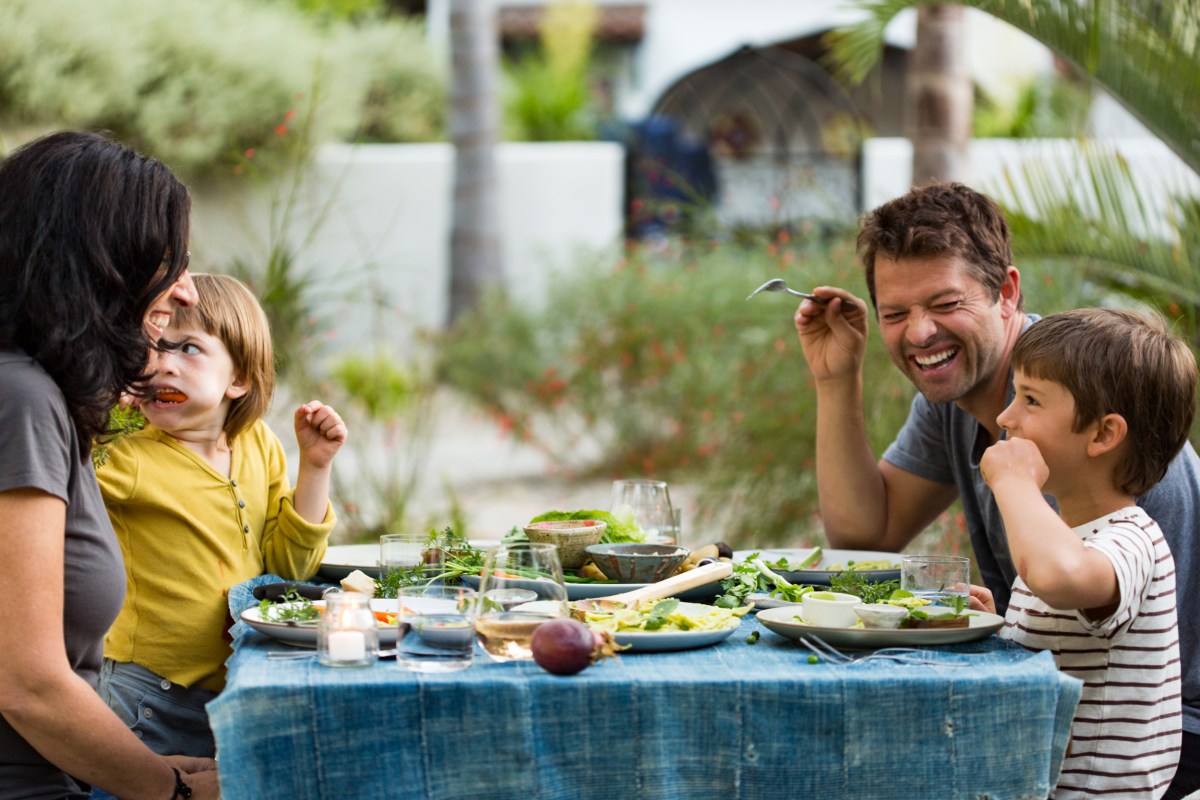 TMS: What was the tipping point for actually getting your kids to eat?

Collins: We were at a loss as parents—just trying to feed our son anything was a challenge. Mealtime felt like a battle. But when our toddler son snuck a jerusalem artichoke home from the grocery store, I said, “I don’t even know how to cook this!” And he said, “I’ll show you.” So we let him.

And while it might not have been a traditional use of jerusalem artichoke, he ate it. That was the a-ha! moment that set our family on a new path and when we really started to welcome our children into the kitchen.

TMS: How can parents cope with feeling like a failure to their children and society when we just can’t get a kid to eat?

Collins: Isn’t feeling like a failure a key part of being a parent? Seriously, I understand feeling like you’re failing your kids. Feeding our kids an endless rotation of kids’ menu items made us feel that way.

Remember that trying to feed your children real, whole foods means bucking an entrenched cultural trend that normalizes processed foods for kids. The kids’ menu is EVERYWHERE in our culture. We’re constantly being told that kids won’t eat anything that isn’t sugary, fried, or beige. That just isn’t true, but it can feel like an uphill battle given all the cultural messages we receive that this is what kids should be eating.

Our advice: Keep presenting kids with a variety of whole foods, don’t keep too many of the easy kids menu items in stock at home, and don’t beat yourself up. Lean into variety when it comes to eating with your kids, rather than worrying about foods to eliminate. Make it a fun adventure you’re on together instead of a battle of wills, and ultimately, they’ll come around.

(Author’s note: Since reading an early copy of the book, we’ve started trying this in my own house, and … it’s slowly starting to work. Yesterday, my daughter ate a bite of asparagus and I almost cried).

TMS: Many parents don’t have the time or the financial resources to cook with kids or provide them with healthy food. How do we combat that?

Collins: I wish there was one, easy answer for this, but things like economic stratification, food deserts, and cultural attitudes with regard to work and food (among other issues) make it a really complex problem, so we’ll need to come at it with a host of solutions to attack each part of the issue head-on. We hope The Adventurous Eaters Club helps reshape some dominant cultural attitudes about food. Many parents are working several jobs and don’t have time to spend hours baking homemade chia-seed muffins. We get it. 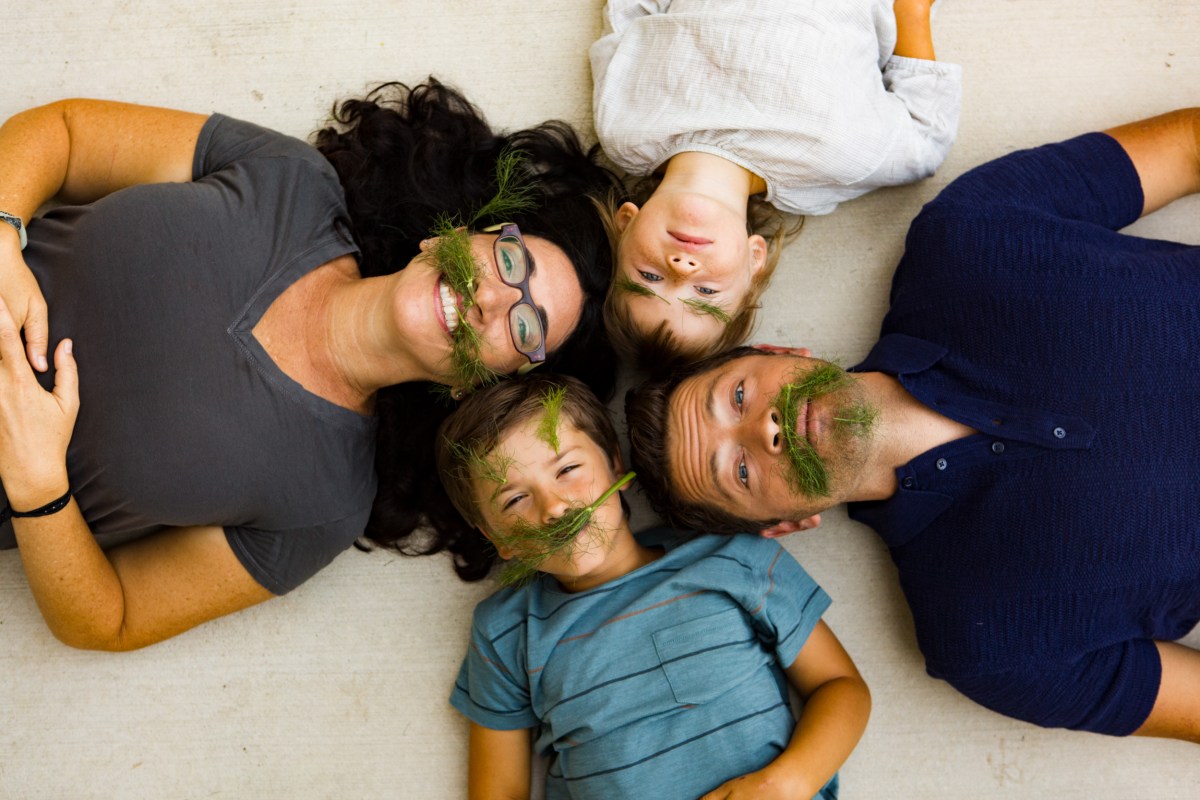 Here’s the dill: play with your food.

However, there are lots of inexpensive ways to include fresh, whole foods in family meals—most of the recipes in our cookbook take less than 30 minutes to prepare, many half that, and none of our ingredients are fancy. Of course, food access and insecurity are real issues facing many families in the U.S. 100% of our profits from the book go to charity, with an emphasis on supporting organizations that bring access to healthy food to kids in underserved communities, so that’s another way we’re trying to help plant seeds to solve this problem.

But there are a lot of other things we’re going to have to do to fix our larger, underlying societal structures that have brought us to this point to begin with.

TMS: Do you have a favorite starter recipe or activity for getting kids interested in cooking and having fun in the kitchen?

Collins: I really like things that are a little bit destructive in fun ways. Smashing open nuts with a mallet, or cracking hard-boiled eggs on your forehead—my son wouldn’t eat a hardboiled egg until I taught him that one. Things that make people of all ages feel like they’re playing together are the best way to open doors to new interests and that includes time in the kitchen. Cooking doesn’t have to feel like a chore, and it shouldn’t be one. Also, can I take a minute to praise the wonders of the mortar and pestle? My kids love grinding up spices for homemade chai and pretty much anything that can be smashed up.

TMS: You said at a recent convention that you’re not actually a fan of breakfast popsicles, one of the recipes in the book. How did those come about, and what recipes ARE you a big fan of?

Collins: Breakfast popsicles are terrible. I don’t recommend them for anyone and fought to have them removed, but was overruled by my wife and family and publisher. So, I apologize for what we’ve done to our society in bringing them into the world. I do like frittatas—breakfast is my jam, and I love eggs. Plus, a good frittata always takes me back to when my mom used to make them with whatever we had on hand, so they evoke good memories for me, and I love making them with my own kids.

TMS: Say you’re dealing with a family: two brothers—one with terrible eating habits, and one who just really likes salads—and their awkward friend who’s from out of town and only really likes PB&Js. What would you cook for them, and how do you think they would do cooking with kids?

Collins: Wow, that family sounds strangely familiar and so relatable! For a family like that, I’d think about where their common interests are. Then, I’d let them all come into the kitchen and figure out what they’d be willing to try together. We’d probably end up with deconstructed kale-and-bacon salad with a peanut-butter-and-jelly dressing, so there’d be something new for everyone, balanced with something familiar to make them all feel comfortable expanding their horizons. (I’m not sure why, but I’d probably suggest they all cut back on the salt as they worked so they’d have it on hand for other uses, too.)

I’m not sure how they’d fare cooking with kids, but as long as they let the kids take the lead, I don’t think it’d be an apocalyptic experience. 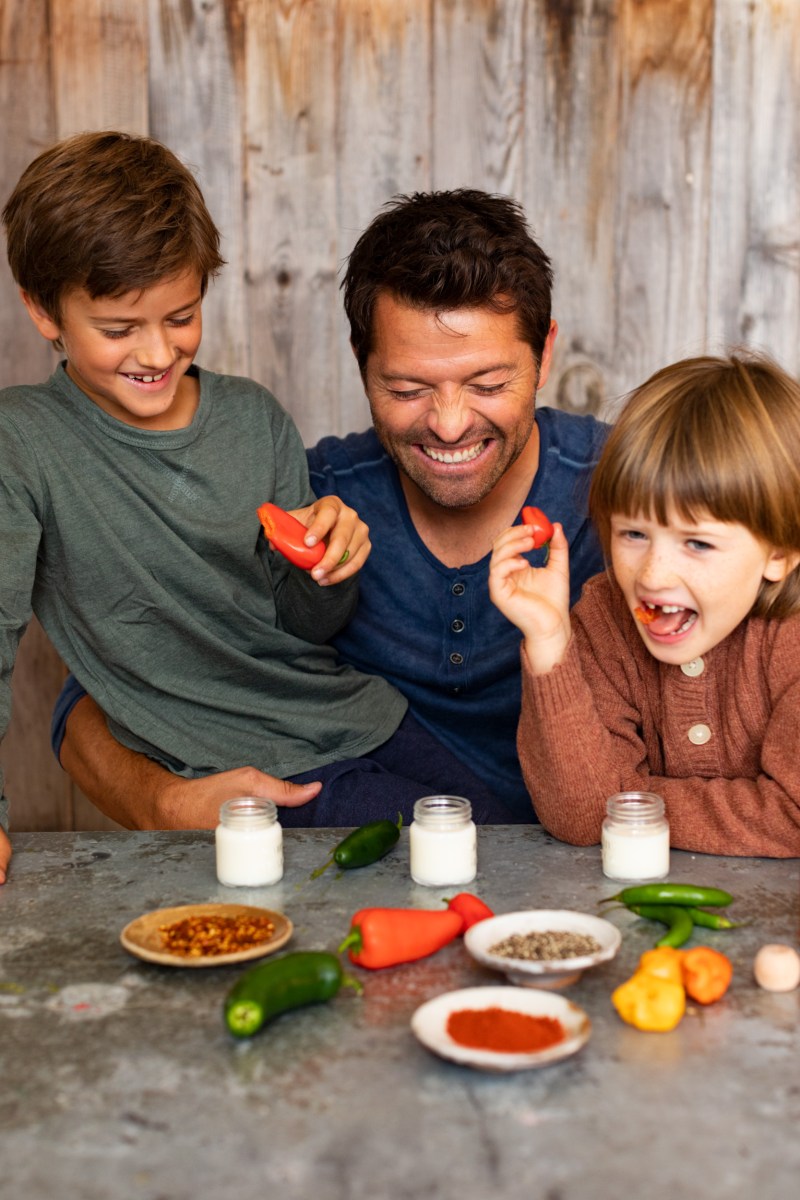 Spice and smiles from West, Misha, and Maison Collins

So, readers, are you ready to get adventurous? Well, check out the recipe below for a hint at what The Adventurous Eaters Club has in store for you, and consider picking up a copy, remembering that all the proceeds go to helping those in need eat better and healthier.

This flashy colorful slaw was the first salad West fell in love with, and it remains one of his favorites. With its tart flavor and satisfying crunch, it turned West into such a die-hard cabbage lover that he’s now determined to invent a cabbage-flavored cotton candy. (Don’t worry: we haven’t gone there . . . yet.) Let your kids do all the grating so they get the chance to work with these colorful veggies.

Kid’s job! Grate, grate, and grate some more! Use the regular large grater holes to grate the carrots, beets, and apple. Use the gigantic slicer hole on the grater to grate the red cabbage.

In a separate bowl, whisk together olive oil and balsamic vinegar. Add salt.

Serve each element separately with a little bowl of dressing on the side so kids can pick and choose which stripe in the rainbow to taste.

West’s Tip: How about sprinkling something crunchy on top? How about salty roasted sunflower seeds? Crushed peanuts? Crushed corn chips?

Excerpted from THE ADVENTUROUS EATERS CLUB by Misha and Vicki Collins, reprinted with permission from HarperOne and imprint of HarperCollins Publishers. Copyright 2019.