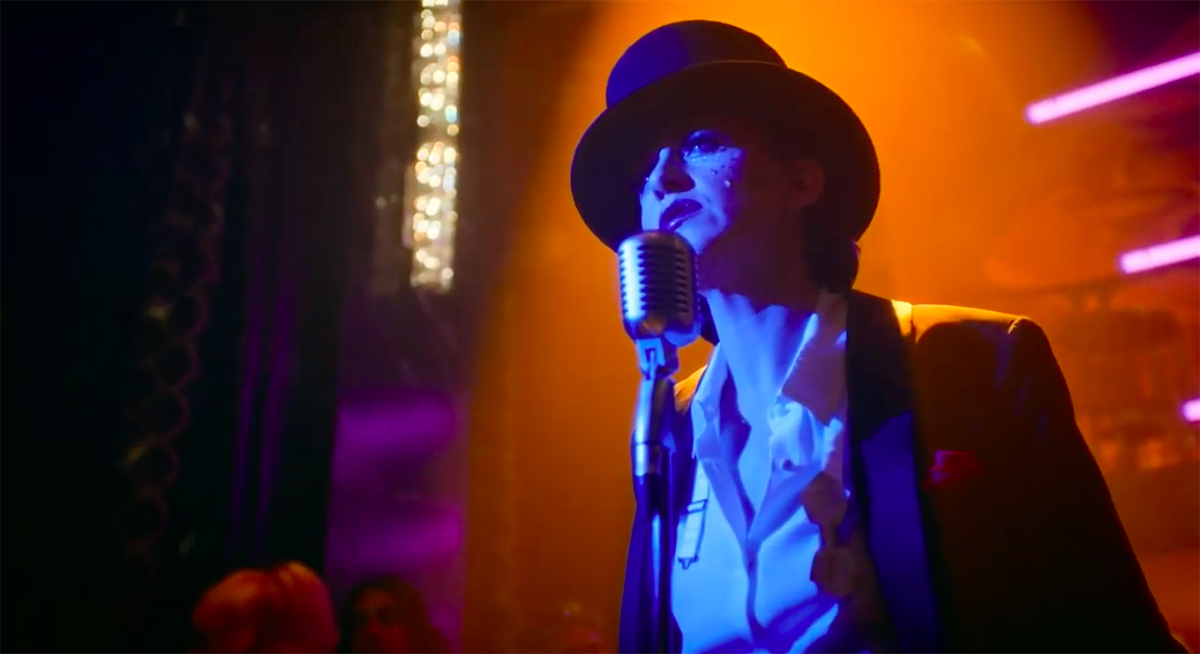 Lena Hall is an incredible performer. Prior to her role as Miss Audrey in TNT’s Snowpiercer series, I saw her on Broadway in Kinky Boots and then in her Tony Award-winning role as Yitzhak in Hedwig and the Angry Inch. But watching her as Miss Audrey in Snowpiercer is a wonderful new turn for the star.

The first we see of Miss Audrey, she’s singing in the Night Car—which, if you know Lena Hall’s career, fits with her aesthetic almost perfectly.

But Miss Audrey is about helping those on the train forget the circumstances they find themselves in (some do not agree with the Night Car, while others do), and her singing “Say It Ain’t So Joe” by Murray Head fits with her situation, as well as the entire vibe of the first few episodes of Snowpiercer.

Talking with Lena Hall, though, it’s clear the amount of love she has for Miss Audrey and this show, and I don’t blame her. It’s a great look at the graphic novel and the famous Bong Joon-Ho film.

The Mary Sue: With Snowpiercer, you guys kind of have a built-in fanbase, so taking on this show, was that frightening for you since it is so different from the movie while still trying to get the same points across?

Lena Hall: Yeah, it’s tough, because everyone who loves the movie really loves the movie. And also the books have a very strong following, as well, and for the lovers of the book, it’s kind of tough to get away from their first love of the books. So, they will have very strong opinions of the show, which is tough. But I always remind myself you can’t please everyone, people will be opinionated and that is okay.

What matters is that I do everything that I can to present a character that is three-dimensional and that I love to play, and I feel like when I’m fully invested and into a character I’m playing, then the audience comes with me on the journey because that feeling is oddly palpable through the character—even if the character is really dark and if you, as an actor, are really loving playing that character then people are more likely to sense that, and they get into it.

So, I hope that the fans of the books and the movie give it a shot, but I know there are a lot of people going in blind, and I always encourage everyone seeing the TV show and being introduced to this world for the first time to also read the books and watch the film, and also watch the TV show, in no particular order. And then they can have kind of an idea of where these stories can go and just how vast this world is. I think it’s super cool.

TMS: I think you kind of have a career of that built-in fanbase from The Search for Elle Woods to Kinky Boots and even Hedwig, but they also have a very you feel to them, and is that something you bring into all these characters to make them your own?

Hall: I try to obviously bring my own flare to every character I play, and whether or not that’s what the director envisioned, they will then guide me, and then we can kind of collaborate on the character together and move it one way or the other that way both views of what the character should be are brought into the one character. And that helps with keeping the character very multi-dimensional, when you have multi inputs on how you think the character should be and are able to kind of meld the two and basically bring both ideas together for one.

Because the way people are, we are multifaceted. We are not just one way, and usually, they will see things that I don’t see, especially in the script, because they’ve written the script or they understand the script a whole lot better than I do because they know where things are going. Because when we get the script, we don’t know where things are going (laughs), we only know one episode at a time, so we have no idea. And not only that, but within the script, while we’re filming, a lot of times they’ll change up the scene before we shoot it because they like it better, and every once in awhile, it’ll be a drastic change.

TMS: What I really enjoyed is the switch … I was late to the Snowpiercer game and watched the movie last year, and when he’s talking about eating the babies, it’s this emotional twist in that movie. And then, in the show, the police officer brings up the rumor about them eating people in the tail, and Daveed Diggs is like, “Nope, not a rumor,” and what I like about the show is that we’re learning so much more in a new and interesting way, and a big part of that comes with the Night Car and how these people need to unpack what has happened to them. Was it more exciting to be part of that world where it’s people actually exploring their traumas and what has happened to them?

Hall: It’s a whole world, so there’s so much detail and so much to talk about and delve into, and we can’t even touch on a lot of things because we have to set it up; it’s a TV show. If you did touch on everything slowly like that, it’d be monotonous after a while. So you’ve got to push through with big storyline and big things happening, because usually, when you want to tell a story, it’s because there’s a large change either in a character or the world.

Something has sparked a thing that will change the way everything exists—kind of like, you know, for us in this current situation it was the Coronavirus. What happened in Wuhan, it sparked a huge change that, I mean, completely changed our world today. And I’m having a hard time remembering what it was like beforehand cause it’s been a while now. This is becoming the new normal now, which is interesting, right?

But if you were going to write a movie, you would start with the world as it was, very briefly, and then that thing sparks the change that changes the entire world or brings a huge change within a character, as well. So that has to be something that’s there for entertainment value, for everyone to tune in every day, and I really like that we have the TV format so we have the episodic format where we can really get into characters and follow different people on their journey, and that, in turn, kind of reveals more of the space of the train and the inner workings of the system of the train.

I think Graham did an amazing job, and the more season we get to do, the more we get to delve into each character. Right now, it’s really very much about the train and Jennifer and Daveed. Like, they are our main storylines we’re arching through and watching, and the rest of us are supporting their storylines. The more time we get to do this show, the more world we get to show. I really hope—cause I love my character so much, I’d love to tell more of her.

TMS: Yeah, she’s very fun. Granted, all we’ve seen so far is her singing one song, but I know that you end up singing more, so what is one song that either you do get to sing or that you want to sing as Miss Audrey that kind of encapsulates how you feel about her or how she is as a character?

Hall: I don’t know … It’s tough. There’s so much that’s revealed later that I don’t want to ruin anything or cheat anyone out of anything. I remember the first song … when we were looking for the first song, and Graham actually picked “Say It Ain’t So Joe.” I had never heard that song before, which is why I’m okay with the production having a hand in picking these songs for me to sing, because a lot of times, they know more of what it needs to say than I do.

And I always go with my tried and true ones that I love to perform, so it kinds of limits me, because I’m like, “Well, I can sing the crap out of this song, why don’t I do this?” So, it becomes really like more about me singing and less about the character, so I do appreciate when they choose the songs for me. Like I had suggested “Five Years,” which is a David Bowie song.

TMS: That’s one of my favorite songs ever.

Hall: And it is about the end of the world! It is a tragic song and it is very heartfelt and it is about the ye ol’ world coming to an end, and I thought it was pretty spot on, but Graham said it was … it wasn’t quite right for the moment, so we didn’t end up using that, but it’s something I covered before. It’s out there on Spotify. It’s on YouTube. It’s literally one of my favorite songs.

You can watch Snowpiercer on TNT on Sunday nights.