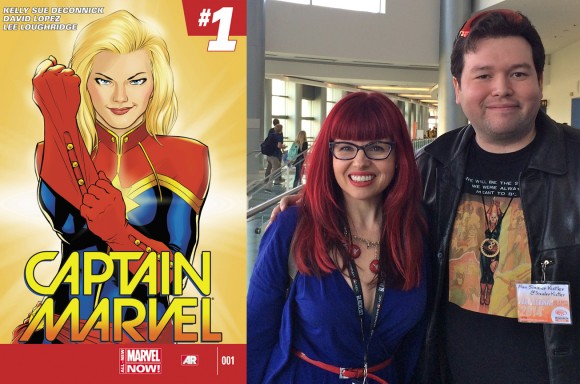 Kelly Sue DeConnick has risen into a fan favorite writer of comics. Her stories featuring Carol Danvers, the original Ms. Marvel, taking up the mantle of Captain Marvel made the series a hit and inspired fans to form the Carol Corps. Her recent western fantasy series Pretty Deadly has completed a successful first story arc. Recently, DeConnick relaunched the Captain Marvel series with a new direction that makes Carol Danvers the Avenger who patrols outer space. At WonderCon 2014, Kelly Sue was kind enough to take the time to chat with us about all her fun projects.

TMS: So you were rocking out with the previous Captain Marvel book so much that the Carol Corps sprung up in response. I can’t think of a fan group quite like this one forming so quickly and so widely. What’s it been like attending the Carol Corps gatherings that are now happening at conventions?

Kelly Sue DeConnick: It is amazing and I am tremendously grateful to have been present for it. I get emotional talking to these girls and women who say how much Captain Marvel means to them and that it’s inspired them. It’s very important to me that the Carol Corps not be identified strongly with me, though. Because as important as Carol Danvers is to me, I don’t own Carol and I will not be writing her forever. I would love it if the Carol Corps continued to exist outside of my personality. The friendships that I see forming from this group remind me so much of the friendships I formed on the Warren Ellis Forum. As much as it was about Ellis, it was also a community separate from him and those are my friends and colleagues today, fifteen years later. I hope that the Carol Corps surpasses my tenure on the book and that the friendships I see forming there surpass my own.

TMS: So with the fan following, why was there a need to relaunch the book? Was it a marketing idea? Was it to mark a new era for Carol and let new readers know they had a jumping on point?

DeConnick: It was an exterior motive at first. We hadn’t been part of the Marvel Now branding until issue #9 of the last Captain Marvel series, and you don’t get the same sales bump with that as you do when you’ve got it starting with #1. So Marvel gave us the opportunity for a bump by relaunching with a new series. And when that was happening, you want a story reason for why this is a new series. You have to justify what makes this a new #1 issue. What makes it a new beginning for Carol?

I was thinking about Mercury 13 by Martha Ackmann, a well-written book about the women of the Mercury 13. There was this scene I kept fixating on, where she’s talking about Jerrie Cobb‘s home in Oklahoma and that it made sense she became a pilot later because everything in that part of the world was trying to take flight. She talks about this sign post on the side of the road that’s shaking with the wind like it wants to leave the Earth. And I thought about how that’s very much Carol. She’s eyes up, chin up, head up. Everything about her wants to leave the Earth. So let’s let her go and see what happens. 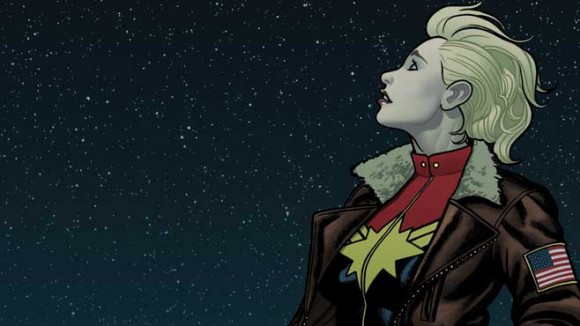 TMS: It also makes sense considering she inherited her powers and legacy from the first Captain Mar-Vell, a space hero and cosmic protector.

DeConnick: Yeah, and Carol’s been a real cosmic character before. So it’s really fun to tap into that idea but it’s scary too. I spent so much time grounding her in New York and giving her a supporting cast that lives there. So taking the chains off to see what happens is exciting and scary. It works because Carol’s trying to figure out her identity, she wants to drive that car and learn how fast it can go, even if that’s dangerous. She says it herself, “I want to find the edge of me.” So it’s okay that it’s scary. Any time I’m uncomfortable, I think, “Okay, this is probably where I should go.”

TMS: In issue #1 of the new series, months have passed since the last series and we find out that Carol and Rhodey are dating. How’d that come about? I never knew how much I wanted Captain Marvel and War Machine to be a couple until I saw that.

DeConnick: [laughs] Aw, you can tell who’s old school when they call him War Machine. I still do that sometimes too, even though he’s Iron Patriot now.

TMS: He’s always be a War Machine to me! Or Rhodey.

I also needed there to be a sacrifice. There’s no drama if she just decides to go into space, there had to be reasons she might not want to go and something she risks losing if she does go. And I like Rhodey’s choice too, that he says he doesn’t want her to go but he will not be the one to hold her down.

TMS: Carol isn’t in space long before she runs into the Guardians of the Galaxy. Will she be working alongside the team for long against multiple cosmic threats? 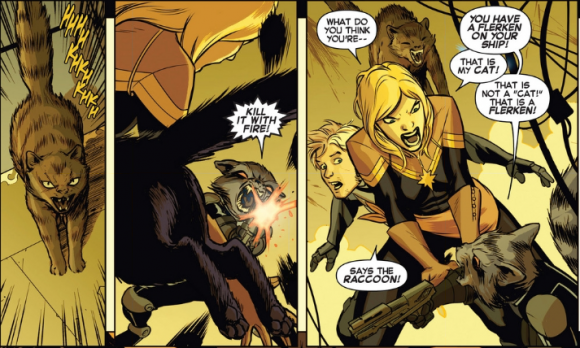 DeConnick: Oooh, that’s tough to answer without giving anything away.

TMS: Then perhaps we should get to the real question: will the cat and the raccoon throw down?

DeConnick: [laughs] You know, everyone thinks that the Rocket Raccoon not liking Carol’s cat is the set-up of a joke. It’s not a joke! It’s a plot point people!

TMS: Hey, I don’t doubt it! I trust Rocket’s instincts. If he says Chewie’s not really a cat, I think that needs looking into!

DeConnick: Rocket’s a smart guy! If you go back to Brian Reed’s run on Ms. Marvel, that cat just shows up one day. We didn’t see Carol adopt Chewie or anything. It just appears around the time that she’s fighting an inter-dimensional villain. I’m just saying! 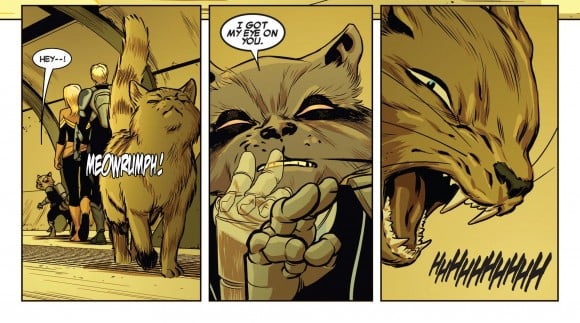 TMS: On a more serious note, when you first started the previous Captain Marvel book, you didn’t look farther ahead than about six issues or so because you didn’t think the title would last. Now that you’ve relaunched with a notable fanbase supporting you from the start, has that changed your long-term thinking?

DeConnick: Oh, yeah! I’ve planned out the whole first year of Captain Marvel. It’s weird, I don’t generally think that far in advance because I’m not that optimistic.

TMS: The formation of the Carol Corps fans must have really changed your mind about the book’s readership. That seems to have happened again with Pretty Deadly. I saw an interview where you joked that maybe six people would be reading that book, but it’s become a fan fave of its own sort. I see Pretty Deadly cosplayers walking around this convention and we’ve got a second story arc on the way. Does defying your own doubts help fuel you in your writing? 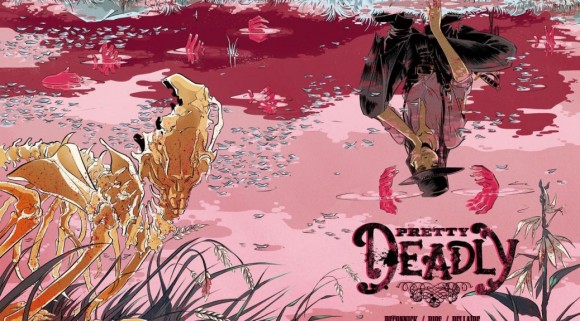 DeConnick: Yeah, I don’t know. I mean, I think I’m a pretty smart person but I guess I’m just not a good psychic! [laughs] I mean, Emma Rios [the artist] and I are mid-list creators at best. And that is a fact! Look at the list and where we fall on it, that is where our sales numbers are. Two female, mid-list creators on a western, which has traditionally not sold well. Plus an independent western, so it’s not even like Jonah Hex, and it’s weird and it’s about supernatural forces of life and death. Yes, Emma’s artwork is extraordinarily beautiful. But there was nothing in the math that said that this book would do sixty out of the gate. So I don’t think there was anything wrong with my logic really [laughs], but I was wrong anyway with my sooth-saying. And thank god!

TMS: The first arc has ended and now the book is on hold before the next story in the saga. Will there be a break after each arc?

DeConnick: There’s going to be breaks between arcs and I hope we don’t lose too much momentum, but I think it’s necessary. One, this is an intricately plotted book and it takes a while to figure it out. Two, this is not a thirty day book. If you look at the pages, you can see that twenty-four pages of that beautiful art cannot be rushed and put together in thirty days. So it’s good to take time to get ahead with the work again and I think the breaks are necessary to maintain the quality. And also I think there are things I could’ve done better in the first arc. I think it reads better in trade than as separate issues and I don’t want that to be true of the second arc. So during the break I’ll figure out how I can do better. That’s always the goal, isn’t it?

TMS: Right, I hear you. Without spoiling the first arc for our readers, it implied the second story would focus on Death’s daughter Ginny. Are we going to see a more human side to her or will she still be this instrument of death and otherworldly forces?

DeConnick: Ginny’s a force of nature. You’ll see a lot more of her this time, but she’s sort of the Man With No Name. She’s not warm and cuddly. It’s not like we’re going to get real close to her. But we’ll spend a lot more time with her and what her life’s about.

TMS: It’s a planet prison for women and things go nuts. Are there any prison movies or stories that you’re taking inspiration from?

DeConnick: Caged Heat! I’m actually only half-kidding. Yeah, there’s a ton of women in prison movies that goes into the DNA of this book but also this is about me venting my spleen. It’s about a lot of things and stories that make me angry I’ll be making fun of them in a way that’s mean and belittling.

TMS: So this is the comic where you smash the fourth wall a bit.

DeConnick: Yeah and it’s an ugly book. I think. But I am very excited about it. It’s going to be fun.

Alan Sizzler Kistler (@SizzlerKistler) is an actor and freelance writer. He is the author of Doctor Who: A History. He wants you all to go out and grab Pretty Deadly and Captain Marvel. Do it now.