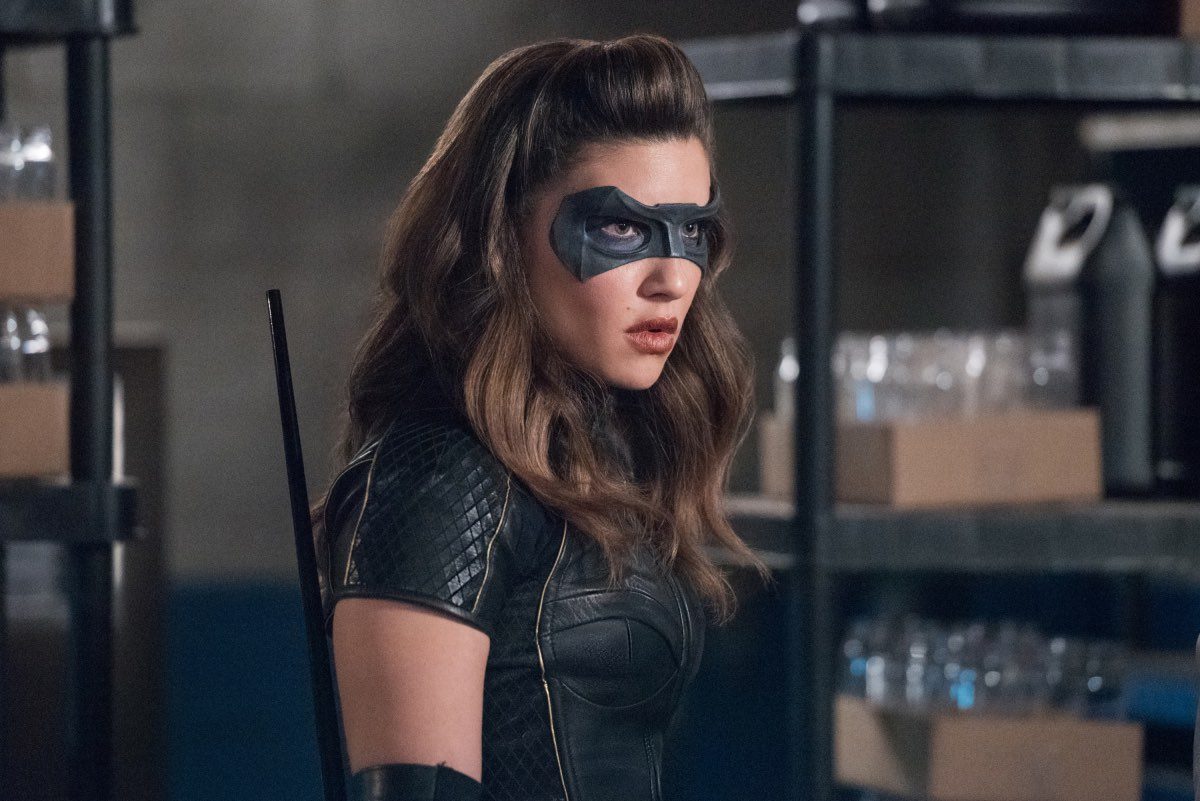 Tonight’s all-new episode of Arrow turns the focus onto the women of the show, and the many women who have worn the title of “Canary” in particular. After being revealed as a criminal, Laurel Lance (Katie Cassidy), an Earth-2 doppelgänger of the former Black Canary, is on a tear, and it’s up to her friend Felicity (Emily Bett Rickards) and the current Canaries—Black and White—to stop her. We talked to Black Canary/Dinah Drake herself, Juliana Harkavy, about the episode and Dinah’s multiple journeys in season seven so far.

Harkavy has been very busy this year, playing two very different versions of Dinah Drake—the present captain of the Star City PD, and a Canary on the run helping out the next generation of heroes in 2040. “Going between the two timelines has probably been one of my favorite things about this season,” Harkavy told The Mary Sue.

“It’s been so different from anything I’ve done on Arrow or anywhere else really … it’s really allowed me to build the character in a deeper way because I know where she’s going. With television, a lot of the time, that’s a luxury you don’t get.” It’s certainly been interesting for audience who spent much of the season wondering how Dinah went from police captain to vigilante in 2040.

One question that was answered recently is how Dinah received the prominent scar she’s been sporting in the flash forwards. It came at the hands of Stanley, Oliver’s friend-turned-serial killer. Was Harkavy told at the start of the season where the scar came from? “They didn’t tell me. They warned me about the scar,” but not how she would be attacked.

“When I read the scene with Stanley, I jumped up and screamed,” Harkavy said. “I liked Stanley so much as a character; I had been rooting for him … He started off so sweet. You just wanted to hug him.” Dinah’s attack and the loss of her canary cry opened up some fascinating stories. “I’ve just been so grateful that I’ve had so many rich things to work with this season, emotionally,” Harkavy shared.

Healing from trauma has become Dinah’s new goal this season. Harkavy explained, “In the past she was dealing with the loss of someone else, and now it’s dealing with a partial loss of herself. It’s also given Dinah some softness and some vulnerability, which is nice when a character is kind of hardened like she is … It’s been good as an actor; it’s been really juicy to work with that.”

Another empowering aspect for Harkavy and for viewers—myself included—has been simply seeing a woman, and a hero, on television with a prominent scar. “We kind of feature it,” Harkavy said of the scar. “We’ll still put her in a low-cut shirt, and she’ll be looking great and she’ll have this scar out, and I was hoping it would help people who do have scars.” (As a scar haver, I can say it certainly does). 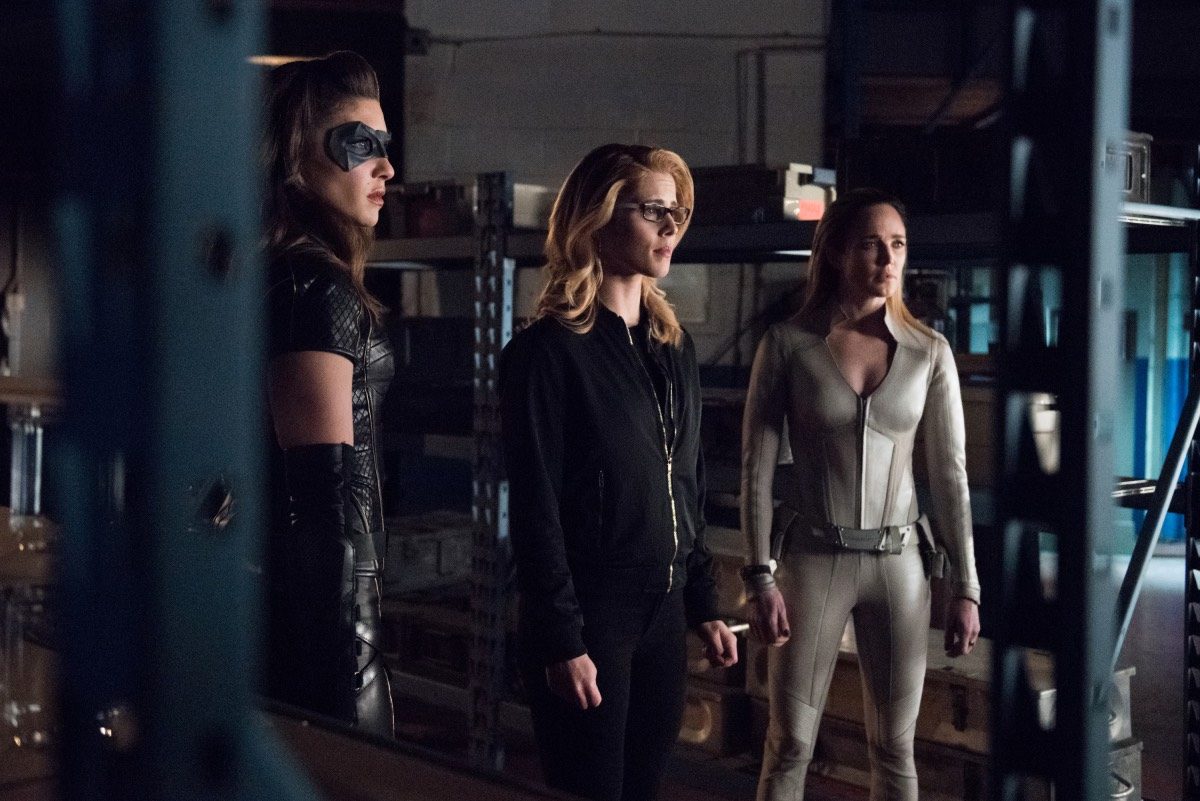 She’ll have help in learning to be a hero without power the form of Sara Lance, played by special guest star Caity Lotz. Sara will be popping over from the Waverider (where she’s dealing with Jane Austen, Bollywood musical numbers, and the unquiet dead the hour before). “We’re dealing with a big problem on our earth, and we sort of recruit her to come and help us,” Harkavy explained. “It’s something that only she can help us with.”

With two Canaries on the job, we’ll also see flash forwards to 2040 that might reveal more about the latest Canary, Zoe Ramirez (Andrea Sixtos) and what it means to carry that title: “The cool thing, especially as we go into the future, is that Dinah sort of takes that title and turns it into something that anyone can be.”

According to Harkavy, a Canary can be any woman “who is in need of something, who is searching for something, who fights and works for it.” Dinah “becomes an advocate for women, in a sense, through the canaries.” We’ll also learn more about how Dinah’s life changed between now and 2040. “We really get to see what happened, a sort of a chain of events that happened so that she flips back the complete opposite way that she is now,” Harkavy teased. “The city changes, and I think that her morals and beliefs change, and all of this sort of self-discovery she’s doing right now that’s she’s lost her cry.”

The self-discovery comes in large part from working with a team of strong women, including Sara and Felicity, who finds herself in the field for this mission. The Birds of Prey comic was a strong reference point for this episode, which was written by two women (Jill Blankenship and Elisa Delson), directed by a woman (Kristin Windell), and made under the leadership of a female showrunner (Beth Schwartz).

“We felt very lucky as we were shooting it,” Harkavy explained. “It didn’t get by us that we were just surrounded by women, and I really think we need more of that in the industry. And I think that the energy it brings to the set and the piece itself is, in a way, different. It’s just a voice that I’d like to hear more often.”

Harkavy had nothing but praise for her costars in the episode, including Lotz: “She’s one of my favorite people to work with and just in general. She teaches me so much. She does so many of her own stunts. This week saw the final series wrap for Emily Bett Rickards as Felicity Smoak, a day and departure that was emotional for everyone. “It was very hard,” Harkavy shared. “It was a very emotional week.”

But she added, “she really has so much talent that we’re all just excited to see where she goes, but we’re all going to miss her deeply.” Before her departure, though, there’s one more story to tell.