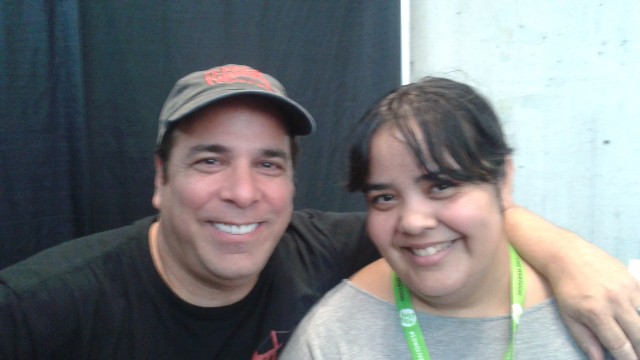 Jimmy Palmiotti is half of one of DC Comics’ most awesome comics teams. He, along with Amanda Conner, are currently writing Harley Quinn and Starfire, and they’ve managed to make those two protagonists – which in other hands could be cartoonish and one-note – nuanced and complicated, without removing any of the fun.

I had the chance to speak with Palmiotti at New York Comic Con earlier this month, and in addition to confirming to each other that we both looked great, had a chat about Harley’s contrary nature, and Starfire’s sexuality.

Teresa Jusino (TMS): With both Harley Quinn and Starfire, what is it about each character that you’re attached to personally? What do you love to write, or what apsects of their personalities do you love the most?

Jimmy Palmiotti: I think with Harley, it’s wish fulfillment. So, if something bothers me, I can work it into a story and Harley can deal with it in a very extreme way. Harley’s also fun, and Harley’s a challenge to write, because if for some reason we think a story should go some way, we always flip it around, because it’s Harley. It wouldn’t go that way. So we always do the opposite.

With Starfire, it makes us put on our thinking caps differently, because she’s a woman who’s on a planet she doesn’t know that we all know. But it’s new to her, and she’s meeting new people and it’s exciting. Kind of like moving to a new city you’ve never been to. So, the fun part of writing Kori is that it’s always a constant exploration of everything. And we have supporting characters who are established, and they know everything, they know the area…I like to say they’re like New Yorkers in a way. They know it. They’re sick of it. Yeah, yeah, the Empire State Building. I gotta go get some lunch. So, when Kori comes into a situation, it’s kind of a breath of fresh air for everybody around her, and I think it’s kinda fun to write that about the character.

Obviously, I’m not big into the punching and kicking. We don’t really do a lot of the superhero antics in it. It’s in there, but I don’t think she’s about that so much, so Amanda and I write her a little differently.

TMS: Yeah, she seems to only do that when necessary. She really just wants to hang out and learn.

Palmiotti: Exactly. And that’s most of us, right? We don’t really want the confrontations and the battles. We really just want to hang out and have a good time, and I think it’s OK to be a little bit more “soap-opera-y” on her book than on most. I think it’s fun.

TMS: I love Starfire so much. And it’s interesting to me though, because she’ll have moments where – well, obviously, she’s super-hot – and she clearly has an effect on men. And she seemingly doesn’t know she’s having that effect…or she doesn’t think about it too much…or does she?

Palmiotti: Both. Sol calls her out in issue 6 or 7 saying There’s know way you don’t know what you’re doing. And she says What do you mean? And then she goes off and laughs. So, she has this little power, and she’s starting to comprehend sarcasm. There was a scene in the first or second issue where she’s kissing one of the guys outside the trailer, and she’s like I had to learn English. And he says, You already know it. And she says, I needed to learn more English. [laughs] She knows what she’s doing, but she’s kinda playing with it.

It’s funny, some people say to me, You write her like she doesn’t know anything. And I say, No, read into it a little more. She just likes that situation, so she’s working it. I think there’s a nice innocence to it. Sort of like how Bettie Page was naughty, but she also had an innocence about her, which made her attractive. And Kori has that. And there are obviously things that Kori doesn’t get yet, but she’s a quick learner, and she’s smart.

TMS: It’s interesting too, because there’s a line in a recent issue where she says something like, Oh, I forgot that you value monogamous relationships here.

Palmiotti: Which is my pick-up line, so…

TMS: But I then do wonder about her home planet, and…has that aspect been delved into in other comics?

Palmiotti: You really bring up a good idea. I love when I get to do interviews, because I get so many great story ideas! [laughs] Well, the idea that their sexuality is more hedonistic on their planet, and she comes here and we’re all prudish – I like to think of that like Americans going to Europe, in a way. Like, the American would be like Oh my God, look at all the nudity on TV, and the people who live there would be like Who cares? In a way, she’s looking at us and saying You need to enjoy yourselves a little more. It’s a statement she makes without hitting you over the head with it. But of course, you don’t want to take it too far, because then it becomes ridiculous.

But we’re having fun. The trick with all these books is to have a good time. Amanda and I are laughing when we write it, and I think it comes across when you read it that we were giggling while we wrote it.

TMS: What do you hope to accomplish by the end of your runs on these characters?

Palmiotti: I guess, I would hope that whatever we’ve done, the next person doesn’t feel like they have to wash it all away and start over. I hope that we cook up enough stuff, good stuff to keep, and then whatever they do, they add onto it and make it even better. There’s nothing harder than to work on something for years, and then have the next team just throw it out the window, you know? But it happens in comics all the time.

But I’m already getting all the happiness, because I’m getting people that – it’s two years in on Harley – and people saying I’ve never even read comics ’til I bought this book. This is the first book I ever bought, and now I buy comics all the time. And that’s the best compliment you can get. Well, that and someone telling you you look handsome that day. That doesn’t happen that much.

Palmiotti: Thanks! So do you!

Both Harley Quinn and Starfire are ongoing and available now from DC Comics. Palmiotti and Conner are also writing the awesomest team-up ever in the 6-part limited series Harley Quinn and Power Girl, which is currently at Issue #4, and will wrap up in November.