Interview: Ethan Young on The Battles of Bridget Lee | The Mary Sue

We shared the trailer for Ethan Young’s The Battles of Bridget Lee: Invasion of Farfall not too long ago, and now that its release date is approaching, I spoke with Ethan about his new sci-fi adventure. Amidst the recent reports that nearly half of Hollywood’s movies don’t have speaking roles for Asian characters, as well as the many examples of erasure we’ve seen lately, Bridget Lee is a breath of fresh air full of interesting and complex female characters. It’s an exciting and explosion-filled story, but it also serves as a reminder that representation is important, and heroism is not, nor has it ever been, the sole province of white men.

TMS (Charline): So you’ve mentioned that Bridget Lee is a loose take on the Mulan story, and you can see that in “The Mighty One,” the preference for families with boys, and similar themes. How do you think you built on or worked with that history in Bridget Lee?

Ethan Young: Much like the ‘Ballad of Mulan’, the folktale of ‘The Mighty One’ emphasizes courage and humility, which is the story’s backbone. I’m intrigued by the idea of a folktale that survives generation after generation, and is adapted to fit a required narrative. Weaving a folktale into a post-apocalyptic setting lends the story a gentler quality, and makes everything feel more grounded. The idea that the oldest form of storytelling is still being utilized hundreds of years from now.

TMS: In some ways, Bridget Lee is an unconventional hero because we meet her in her post-battle days as a nurse. What do you feel is the power of focalizing this world through a character like her, rather than, say, a more archetypal male warrior like Waters?

Young: The power of emphasizing Bridget is one word: representation. To the best of my knowledge, there simply aren’t a lot of Asian-American women leading a sci-fi story. I can think of Mirror’s Edge, and that’s about it. And no, movies from Asia don’t count. I would also add Monstress to the list, even though it takes place in an alternate Asia, but it’s written with a very Asian-American voice.

Sci-fi allows creators to deconstruct society, and rebuild a future with new rules. And more often than not, that future lacks diversity, or the diversity is simply window-dressing. That’s simply not where we’re heading; we’re only getting MORE diverse. I want a book that my niece could’ve devoured in her early teens, when she was desperate to see more characters like her. Also, not every comic fan lives in a rich, diverse metropolis. For a lot of people, their only exposure to diversity is what they read and watch. And if all your Asian-American women are just exotic femme fatales, that’s just lazy writing. So, yeah, representation matters. We’ve had plenty of Waters in the sci-fi world already. 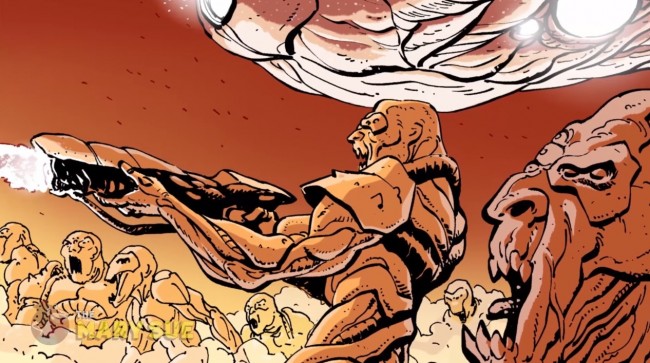 TMS: The antagonists are the Marauders, humanoid bug-eyed creatures. How did you come up with their design and the design of their ships?

Young: I wanted them to be the antithesis of the humans, who have a ragged, DIY infrastructure. Everything is chunky and linear, with exposed pipes and wiring. The Marauders are techno-organic, as are their ships, which are smooth and almost skin-like. The design of the Marauders themselves combines my love of drawing zombies (I’m not actually a big fan of the genre, just drawing them), and my obsession with big, physically intimidating villains. Bane is actually one of my favorite Batman villains, because he’s huge and cunning, and can break Batman in half. Batman, in turn, is forced to use his mind more.

TMS: Switching from the grim black and white from your previous book Nanjing, color in Bridget Lee seems plays a role not only in the sectors, but also in a really cinematic way. There’s a dusty yellow/orange tone in battle and then a strong blue for parts of Farfall. How do you think color informs this story?

Young: Thanks for complimenting my colors, by the way! I’ve been really self-conscious of my coloring skills, since I only started Photoshop coloring eight years ago. I looked at a lot of Fiona Staples’s work during this process. She’s so good at using color to establish mood, but also establishing consistency and balance. You want the tones to reflect the scene, but they also need to be cohesive. It can’t look like it was colored by two separate people with separate ideologies on coloring. A lot of times, that can be hard. You see some comics that are too flat across the board, or the colors are way too loud scene to scene. 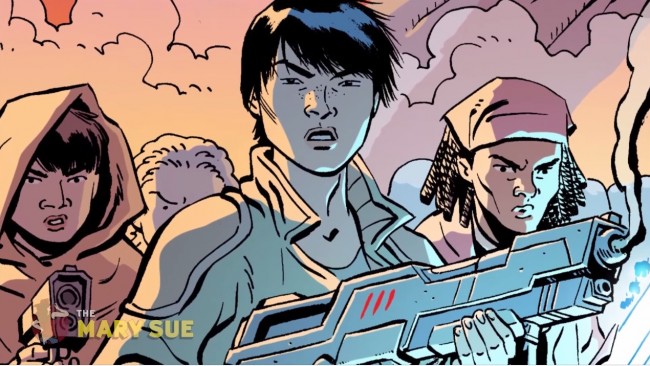 TMS: The story is full of awesome female characters like Bree, Zhan, and even children like Jane that I felt really balanced each other out. It’s especially interesting that they have to struggle not only with this post-apocalyptic world, but also the “Locust Mandate.” What was the process of creating them like?

Young: I plucked personality traits from female friends, genderqueer friends, my mother, and my wife, Carol. Zhan is actually my mom’s name, Zhan Xian, and there’s a lot of my mom’s personality in Zhan: she’s warm, comforting, but can be blunt and slightly passive-aggressive. With Bree, as I was developing her narrative, I definitely wanted to avoid a straight damsel-in-distress, but I also needed her to embody the anxiety and unease that every human felt. I just thought, “What expectations do we have for a character like Bree, and how can we subvert it? What would my friends say/do?”

There’s a larger conversation in media now, who gets to write whose story? It’s a very important conversation to have, especially for those voices that have been marginalized, ignored, misrepresented, or just downright vilified. I’m very well aware that I’m an Asian-American man writing an Asian-American woman, and it’s not my lived experience. I want to try my best, and infuse the characters with enough agency and honesty that I’m not just rearranging old tropes for the reader. The whole time I was doing this book, I kept in mind, “All these characters need something to do, not just Bridget and a few others. Every character needs a voice.” I just hope I did my best and that readers will respond to it.

TMS: There’s a kind of timeliness in the way that the story wants to de-mythologize the uncomplicated hero. Bridget can already kick butt, but she’s also wracked with survivors guilt and fear. What do you think readers should take away from this story?

Young: That being the hero doesn’t mean being impenetrable or perfect. And that vulnerability is not a weakness, it is simply human. Above all else, The Battles of Bridget Lee is about a family. One that just happens to be unrelated and thrown together by circumstance, but their sense of family is what defines them.

TMS: What are you working on now? Are we going to see more of Bridget Lee?

Young: I certainly hope I get the chance. I have at least two more volumes of Bridget Lee planned, and I want to give those characters a chance to evolve on the page. It’ll largely depend on how strong the reception to this first volume goes, so I have my fingers crossed. As for other projects, I’m wrapping up my digital project, Pilgrim Finch, at the end of the year for STELA. After that, I’m gonna try and develop another graphic novel to keep myself occupied. I’m still juggling a few ideas in my brain.

If post-apocalyptic worlds, badass Asian women, and aliens do anything for you, I definitely recommend picking up a copy when Bridget Lee comes out September 21st (or you can pre-order it).