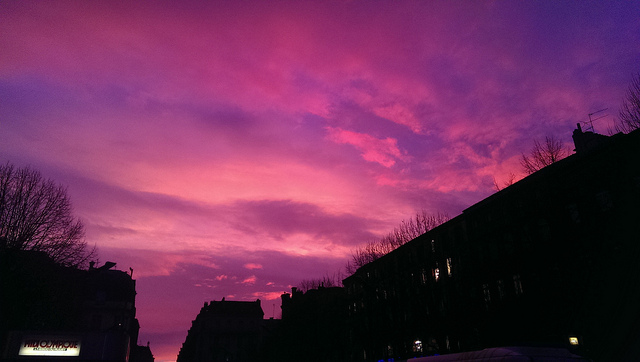 October, 1955, a group of physicists examine a prototype for a baby jet that will propel itself using monoatomic oxygen in the atmosphere… indefinitely.

February, 2015, Michael Heiland awakens on an Arizona mountainside. Rolling out from under his camera tripod, he examines the stop-image photography it captured overnight. To his dismay, a pink smear is spread across the night sky in several of the images of Tucson.

September, 2012, Dr. Natasha Jackson-Booth scrambles with the rest of her research team to save their high frequency radio monitoring equipment endangered by an unexpected flood on the Marshall Islands.

All of these incidents are linked by a series of rocket-launched military experiments performed in the earth’s ionosphere—an atmospheric layer 60 kilometers up. The first experiment—codenamed Smoke Puff—took place in 1952, in an attempt to understand the types and densities of gasses that existed in the ionosphere. The ionosphere is critical to both high frequency terrestrial radio communication and ultra-high frequency satellite communications albeit in diametrically opposed ways.

During the day, the ionosphere reflects high frequency radio waves enabling long distance ‘skip’ communications. These skip mode messages were crucial for military and commercial communications, before the existence of the network of communication satellites we enjoy today. The 1950’s experiments were looking for ways to improve the radio-bounce properties of the ionosphere, today’s experiments are aimed at an exactly opposite objective.

While the ionosphere is mostly transparent to the ultra-high-frequency radio waves used in satellite communications, bubbles, known as ionospheric scintillations, can form, temporarily munging signals. Communication signals are relatively unaffected by these bubbles, but garbled GPS signals—the ones used by your cell phone’s mapping system—result in small position errors. Consequently, recent experiments, including the one whose effects were observed over Tucson and the one Dr. Jackson-Booth worked on near Kwajalein Atoll in the Marshall Islands, are trying to determine the properties of the ionosphere in hopes that these bubbles can be smoothed away.

Dr. Jackson-Booth, who works for QinetiQ, a British defense technology company, was kind enough to answer a few questions about her role in these experiments for The Mary Sue.

Hamilton Carter (TMS): What was your role in the experiment?  In general, what’s your role at QinetiQ?

Dr. Natasha Jackson-Booth: I was the trials manager for the UK component of the experiment. I worked on designing and building a High Frequency (HF) diagnostic system to support the US run Metal Oxide Space Cloud (MOSC) experiment. Having built, integrated, and tested the HF system in UK based trials the equipment was deployed in the Marshall Islands. During the deployment I was responsible for the installation of equipment, data recording and analysis as well as searching for signs of ionospheric modification caused by the release of samarium.

When not on trials I am the Domain Lead for the QinetiQ Ionospheric and Space Weather Research Team. I lead a team investigating the impacts of the ionosphere and space weather on communication systems (including GPS). We then attempt to design suitable mitigations for the different systems.

TMS:  Did the MOSC experiment proceed as expected?  What did you learn?  Were there any surprises?  What was the most exciting part of the project for you?  Did you get to travel to Kwajalein Atoll for the launch?
Whenever there are experimental trials things tend to take unexpected turns. This was definitely the case for MOSC where our antenna array was nearly washed away by a flood that occurred during the middle of a drought. Whenever you take part in experimental work you definitely have to expect the unexpected and have several contingency plans.

Jackson-Booth: Despite that though our equipment was able to detect the Samarium release and we were able to see a brand new ionospheric layer for over twenty five minutes. Such a layer can be used to enhance HF communications.

The most exciting part of the project was seeing the cloud appear in the sky. None of us were entirely sure what to expect or if we would see anything. When the cloud finally did appear there was a huge feeling of relief as well as celebration that months of hard work had paid off.

I did get to travel to the Kwajalein Atoll and I was based out there for four weeks (although I avoided the long boat rides to the outer atolls). It was an amazing experience.

TMS:  How did you become interested in the sciences?  What specifically led you to the field you work in now?

Jackson-Booth: I have always been interested in understanding how things work and really enjoyed physics at school. I was also very fortunate to have an enthusiastic physics teacher who always encouraged me. When I was at university I was able to concentrate on physics which acted to ignite my interest and resulted in me studying for several years to get a PhD in astrophysics.

I ended up in my current field by luck. Having finished my PhD I decided I wanted to move into an area with more real life applications. Around that time I went to a careers talk by QinetiQ and knew as soon as I heard about the work they were doing that that was where I wanted to work. When I started at QinetiQ I was placed in the Space Weather team and have stayed there ever since.

TMS:  What is part of your work is your favorite?

Jackson-Booth: I love taking part in experimental field work. It is always hard work, but really exciting. You get to push the boundaries of what is possible and you never know with any certainty what you will find.

TMS:  How could students best prepare to enter a field similar to yours?

Jackson-Booth: Firstly, they should follow their interests. Then try to get experience at science and technology companies giving them a chance to try different areas and really experience what it is like to work in science and engineering. Finally they should always be prepared to try new things – you never know where it might lead.

Hamilton Carter’s childhood dreams of becoming an archeologist/novelist/ physicist/adventurer morphed into his present-day life as a dad/science writer/physics grad student/electronics engineer, which is to say he’s accomplished all his life goals to date. As a kid, his love of comic books and sci-fi led him to science. He built a cyclotron in high school while hanging out with classmates who built linacs, Tesla coils, and linacs powered by Tesla coils. Having grown up in the mountains of south-central New Mexico, he enjoys hiking and camping with his family anytime he gets anywhere near a mountain. For now though, he is leading a delightfully happy—albeit hot and humid—life studying physics at Texas A&M University. You canfind him on G+, or read about his ongoing shenanigans athttp://copaseticflow.blogspot.com/.